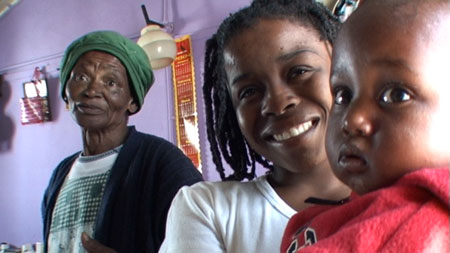 "Flying" in South Africa: Khosi (middle), shown with her grandmother and her son, in their Soweto home.

As an award-winning director, producer and camerawoman, Jennifer Fox is certainly well-versed in all the conventions of ‘proper’ documentary filmmaking – introduce the camera slowly, don’t talk about your own life, “create a neutral plane they can project on,” as she says.

However, her latest film Flying: Confessions of a Free Woman, a six-hour series airing on Sundance Channel this month, began with a simple idea, and as it grew, she realized she had developed a new style that broke these conventions.

“I had the idea that I would film myself, my girlfriends here and around the world, and strangers I would meet to see if there’s a thread. Is there a common language? Is there a womanspeak?” That initial idea, fermented through the years as she noticed the nature of her conversations with women. “All of my work, everything is driven by the idea—that never changed,” Fox says.

The genre of personal documentary is nothing new, but Flying changes the very meaning of what’s personal. Yes, it’s a story about her life. But it’s also a story about the universality of women, spanning 17 countries and edited down from 1,700 hours of footage. Yes, she turns the camera on herself. But rather than that camera being operated by a DP or sitting static on a tripod, Fox handed it over to whomever she happened to be talking with at the time, a technique she came to call “passing the camera.” What’s more, instead of cramming the film into the standard television or theatrical lengths, she divided it into six one-hour episodes. The result is that the line between subject and filmmaker vanishes. What emerges is more intimate and personal.

“That the power is being shared creates a different conversation,” Fox says. “I hope Flying can create another dialogue, one about representation. Most of the time we don’t capture real life, we ask people to act in their real life. They are not being themselves. We notice it, but we don’t articulate it.”

“We all hide the reality of our lives because it doesn’t fit some external standard,” she continues. “But in the film, I’m putting it all out there and so are all my girlfriends, and so are all the women in the film.”

In filming, Fox chose to have the camera rolling constantly. She filmed when she got off an airplane, when she got up in the morning, when she met people for the first time — and in every situation, she would hand over the camera. And through its accessibility and overuse, the camera lost its power to intimidate.

The conversations that emerge from passing the camera feel very natural, private and real. “Of course you’re going to overshoot,” she says, “but you also get some really spontaneous moments.”

“In some ways what we do in Flying is radical,” she explains. “Here’s a white woman being shown in the same scene as a woman behind the veil. Normally we show the other by itself. But instead it’s not just about the poor woman in Pakistan, it’s about how our lives relate to one another.” And she believes, this shift can change more than just our conversations on gender and sexuality. “We see women in the Third World related to us… If it’s just ‘us’ and not ‘us and them,’ then we can really do something.”

Of course, “passing the camera” wasn’t initially met with much enthusiasm from potential funders. “All the broadcasters said it won’t work because real people can’t shoot.” Convinced nonetheless of the technique’s merit, Fox and her editor cut together an eight-minute segment of passing the camera in six different countries. “Once they saw the segment, that argument just fell apart” and the same commission editors who had questioned it, never mentioned it again, and readily funded the project.

Another hurdle came when Fox realized that the feature film they promised distributors and funders had outgrown its length. “About halfway through shooting I realized these stories were occurring over this span of time, and I wanted to have some women appearing like an ensemble cast of characters,” she says. “These kinds of stories over time were like the musical refrain to the new events that would occur. In story terms, it couldn’t take place as a feature.”

When her team initially pitched this idea of making a longer piece, it went “really badly” as she puts it. “You know the way it is today – it’s a much different distributor who can take a feature than a series. In the beginning they all said forget it. We took that in stride. I kept shooting. And the more I shot the more we [meaning Fox, editor Niels Pagh Andersen, producer Claus Ladagaard] were more convinced.” Eager to keep everyone on board, they cut two pilot episodes in six weeks. “We were pretty sure we would ultimately have to cut a feature since the Danish Film Institute, which accounted for 40% of our funding, doesn’t support features. But what happened was we cut those two pilot episodes and a lot of people were really hooked… We continued going and gradually got buy in from seven buyers.” And at the end, even the funders at the Danish Film Institute loved the series so much they waived their requirement for a feature.

“My experience is you think you sell people once but really you sell them over and over through the process – especially with what I’m doing where it’s changing,” Fox says. “You have to keep pitching.” And through the process, she says, she never knew what direction exactly the film would take or how anyone else would react to it. “It’s just a big fucking crapshoot fact that I’m still alive as a filmmaker.”

Sometimes she even had to turn her sales pitch on herself. “In Flying, aesthetics are less important than presence. Even though there are aspects of aesthetics, it’s an exciting film because of the quality of people’s presence. I happen to be quite an aesthetic person so I had to relax in order to show up and be part.”

And, in fact, the honesty that comes through in Flying may more real than reality itself. “In the film you see me more real than if you met me in person today. Today, I would want to make a good impression; I would want you to think I’m smart; I’d worry if my make-up was on right.”

See the Flying: Confesions of a Free Woman website and the online store for DVDs.

Watch the full series on Sundance Channel in May and June 2008.

You’re invited to ‘pass the camera’ and submit a segment or submit a 7th episode: deadline May 30, 2008.

Watch an interview with Jennifer Fox and the trailer.

2 Responses to “To Shoot “Flying,” Jennifer Fox Gave Up Control of Her Camera”