The Independent supports the global community of independent, grassroots, and activist media-makers through coverage of their work online. The publication provides reviews, interviews, news and instructional essays to help keep the independent media communities informed on what’s happening in the world of film. We will also promote production companies, directors, actors, and screenwriters across race, gender, age, religion, nationality, identity, and experience to help amplify their stories.

After almost fifty years of covering the creation and management of independent media projects, The Independent continues to provide inspiration and information for all media-makers. From coverage of current films and festivals to free digital access to over 30 years of our print publication, we will be there to support anyone who has a story to tell.

The Independent is dedicated to promoting anyone involved in making film across race, gender, age, religion, nationality, identity, and experience and is focused on helping to support their stories told throughout the world of film, television, VR and other media. 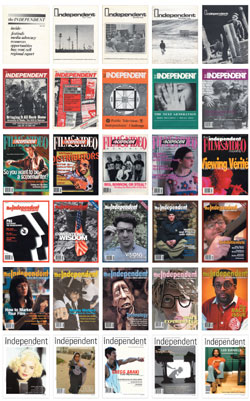 Founded as a nonprofit organization in 2007, Independent Media Publications inherited the rights to the AIVF’s publications, including the 30-year archives of The Independent Film & Video Monthly and several books. Since then, the organization has relaunched the magazine online with more than 13,000 subscribers and published its first book The Independent’s Guide to Film Distributors. An updated second edition came out in 2014.

In 2020 the publication found a new home at Emerson College. The college will continue the work of keeping readers informed on the independent and activist media-makers. We also hope to keep strengthening the connections of the larger independent media community.

Thanks to your support, Independent Media Publications is in the process of digitizing and posting online all the articles dating back to the first issue in 1976, as an effort to preserve this invaluable historic resource for the independent film community. Ongoing efforts include launching investigative initiatives on behalf of independent media-makers, and continuing to bring readers The Independent online.

For more information about the transition see “The Independent is Back!” and “A Q&A With Our Readers”.