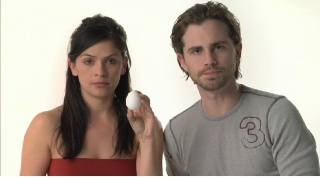 Rider Strong's ad "It Could Happen To You" won funniest ad in the Obama in 30 Seconds contest.

Rider Strong grew up on television. Not like most of us, consuming it after school with a Hi-C juice box and a Swiss Cake roll, but as Shawn Hunter, the beloved boy next door on Boy Meets World. Considering the fate of other child actors, spending ages 13 to 20 under the hot lights of American television could have been his one-way ticket to rehab. (Or a lifetime contract to be a wigged pop star by day, “regular” teen by night.) But Strong has been steadily plotting a different course. He earned a BA in English from Columbia. Now he’s writing short fiction and working toward an MFA from the Bennington Writing Seminars.

Our recent back and forth reveals that Strong’s ambitions may be more Schwarzenegger than Terminator, more Reagan than Gipper. Though he would undoubtedly lean more left.

Irish Twins premiered at Tribeca in April and has been running the festival circuit, with a stop planned in September at DC Shorts. The film is about a brotherly disagreement about the family mythology, prompted by their father’s passing. It starts in a bar and yes, punches are thrown.

Because Strong and I are colleagues at Bennington, I asked if our dialogue could be a collaborative effort. I constructed the written “conversation” below with his help, based on a phone conversation and lively email exchange. The Independent encourages reader comments to continue the dialogue.

Yes. I am one of those people who always thought I was going to be president some day. Or at least go into politics as a politician, but then I had more pressing goals as an artist, and pushed that aside. Maybe I’ll pull an Arnold Schwarzenegger in a few decades.

You mean running for office or being the most pumped-up man in the universe?

Both. It’s a joke with all of my friends who are involved in public policy, or doing development in Africa. They position themselves in my cabinet, saying, “I’ll be head of foreign affairs. I’ll be head of education.”

Before Obama in 30 Seconds, had you ever been politically active?

My parents held a fundraiser for John Kerry [in 2004], they were like, “Hey Rider, come say something.” I gave this speech and it went well, to the extent that a small town gathering can go well. My friends and family said, “Rider you have to get into politics, you have to do this full time.”

That’s why the MoveOn.org Obama thing was so important to me. I thought: I can’t just sit on my ass, I have to utilize some of the filmmaking skills I have towards something I believe in. At some point, I’d like to dedicate more time to local politics, but I just don’t have time. I am sort of being selfish right now, trying to be the most successful entertainment industry person I can.

How is that going?

This last year has been such a lesson personally. I feel like there are so many myths about the entertainment industry we tell ourselves. The main one is that if you play by the rules you are going to succeed. Or if you write good script, make a short film, you are going to find success, but no one has ever made it by playing by rules. It has been interesting to be confronted with that by making Irish Twins. Also I am getting older and recognizing that the artists I respect are the people that took some pretty random risks and just did something because they wanted to do it.

The extreme version of that is you end up doing community theater and no one knows who you are. I have to balance how much do I want to cater to an audience, or with Irish Twins, how much do I stand by my original vision?

Do you think of Irish Twins as a career shift, an artistic shift, both?

Definitely, Shiloh and I had written a couple of scripts in genre mode — we wrote a horror film, wrote a comedy. The horror film was ok. We got some interest but nothing was happening.

Irish Twins was the product of us saying we need to just do it ourselves, to make something that we’re proud of that could also function as a calling card to make a feature. We wrote three different shorts, and they were all completely different. We thought it would be an easy decision, and a lot of it came down to money and time. We picked Irish Twins because we could shoot a 20-minute film in three days if we were in it.

Three days is not much time.

Every other short in our program at Tribeca, besides one that was only two minutes long, had at least six days of filming. We did one or two takes of everything. Part of that is because we could rehearse and block scenes out before the cameras arrived. We could tell the DP, Here’s how the shot’s going to go. Our most takes were because of a terrible dolly grip.

But you had those gorgeous crane shots at the opening, outside of the bar, and then later, at the bridge…

We knew it was a really talky short, so when we were outside we wanted to take advantage of space, and emphasize the visual aspect. We both tend to be actor-focused, and to think in terms of dialogue. Our other short scripts were much more commercial: less dialogue, more plot. Irish Twins is more indulgent, but thematically it’s exactly the type of movie we want to make.

From a technical standpoint, how involved were you with this project?

We did everything. We tried to make as many technical decisions in advance as possible so we could just perform on the day. We storyboarded everything… Spent a lot of time in post-production, not surprising that that’s where we have the least experience, as an actor you’re there for every part of production, except post. But I edited the extra Obama commercials that we posted on our website, so I’m learning.

Any lessons learned from the festival application process?

One thing cool about DC shorts is that after you submit, even if you don’t get in, they give you a link where judges have posted their comments. It’s so helpful! I don’t understand why more festivals don’t do this! Judges give 1-5 on production value, sound, etc. They put little notes, too, like I love this, hate this, and explain why. It’s hysterical to see how much the response varied. The first person that watched Irish Twins gave us a 1 for writing, 0 for directing, the next one gave us 5. One commented, “This movie is so slow.” The next one said, “It’s exciting start to finish, best one we’ve seen so far.” It’s cool that they are that open with filmmakers.

How else, besides fests, will audiences be able to see Irish Twins?

That’s it. There is so little distribution for short films. We have music rights issues with one song, which is why we can’t put it on the Internet. Not sure. Ask me again in a year.

Do you notice a difference in the reaction you get in LA when you talk about this film versus in other regions of the country?

In the rest of country if you make a short film, that is in and of itself a cool thing. In LA it’s that little pet project that nobody wants to talk about. Luckily, what I got out of it was a literary agent for screenwriting. He saw Irish Twins and now he reps me. But we had to make a short film just to get the guy on the phone. Everyone is so scared to take risks especially when everything is so expensive, hopefully now we have some kind of proof.

So your prior work experience wasn’t enough proof?

Nope. It kind of makes sense, I guess, I mean not all actors would make good directors.

Something that’s weird for me about our film is the perception of it as an insider production. But absolutely every person who worked with us was somebody that we knew personally, not somebody we’d worked with before.

I run into this attitude, people call Irish Twins slick and Hollywood-y, I guess it’s just the actor thing. But whenever you’re in one aspect of the industry — now a sitcom, now horror films — it’s hard to break out of that….

But now that you’re a member of Team Obama?

We were really glad to see that even though we didn’t officially win the MoveOn contest, our commercial made it on television. Of course the $20,000 of video equipment would’ve been nice — we could be making another short right now!

For now I’ll be pigeonholed as that political actor…

One Response to “Rider Strong Moves On”