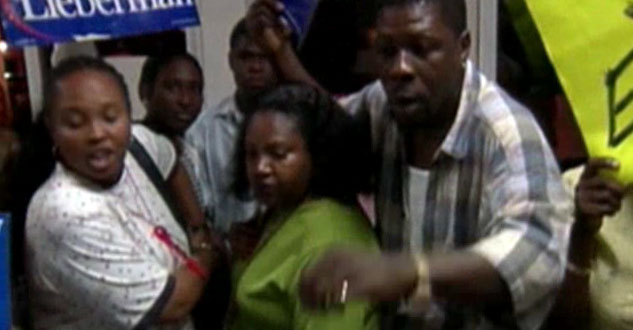 Angry citizens in Florida shut out on Election day in 2000.

Between polls, pundits, and analysts, predictions of the upcoming presidential election seem endless, with many agreeing this could be yet another tight race where, in certain states, every vote will count. And if you think that’s just a cliché, think of this: in 2004, George W. Bush won by taking Ohio with 118,601 votes, or about 9 votes per precinct. And final counts in Florida during the 2000 election showed Bush won by a mere 537 votes.

With elections being decided by a handful of votes, who ensures that voting is accessible and counting is accurate? A number of concerns at the polls that arose in the 2000 and 2004 elections, are once again poised to be issues this November 4, such as long lines, list purges, voter intimidation, and misallocated and malfunctioning equipment. And, although these problems can have a deciding impact on the electoral outcome, coverage of voting irregularities often takes a backseat to calling races in the mainstream media.

Enter Video the Vote who, in September 2006, first put out an online call-to-action to which more than 1,300 citizen journalists responded to document the elections in their neighborhoods. Since then, Video the Vote has created hundreds of videos documenting voting issues and gained partnerships with a variety of outlets from PBS to YouTube. For the upcoming election, several thousand volunteers (you can join too), are scheduled to document the November 4 election to ensure timely, complete, and accurate reporting of voter suppression and election irregularities. The Independent spoke with Daniel Souweine, COO of the Citizen Engagement Laboratory and volunteer of Video the Vote, to learn more about the history of the organization and how independent filmmakers can get involved.

Tell me a bit about why Video the Vote was started?

Video the Vote was started in 2006 by filmmakers Ian Inaba (GNN.tv), John Ennis (Shoot First, Inc.), and online organizer James Rucker (ColorOfChange.org). The three originally envisioned a platform for organizing independent filmmakers on Election Day 2006, but the idea quickly morphed into a populist program that brought together citizen journalists of all experience levels to document the election in their communities.

How does documenting election day help prevent or expose problems with voting?

We’ve found that just the act of documenting elections can have a deterrent effect on problems: the presence of video cameras makes it harder for people trying to suppress the vote. But even more importantly, documenting on election day is essential for publicizing voter disenfranchisement. The truth is, most people don’t have problems voting, so they don’t necessarily think there are problems to be solved. It’s very important for them to see what happens when things don’t work, which is why we feed our videos to media outlets as soon as they are submitted.

Video the Vote has more than 2,600 volunteers, but we need more! We especially need help in battleground states. Voters tend to have many more problems in states where the election is being hotly contested. If you’re not sure if you live in a battleground state, this is a pretty good list: www.politico.com/convention/swingstate.html

How experienced must volunteers be?

Our volunteers have all levels of experience, from professional filmmakers to first-time shooters. And you don’t even need a camera to participate. We also need volunteers to serve as dispatchers, drivers, bloggers, and tech support.

What are the areas of the country that are most concerning at this point?

It’s hard to pick because frankly we are concerned about a lot of places. But to cite just a few, we’re worried about Virginia, which has not been a battleground state for a long time. There’s been a huge increase in registrations there, turnout is expected to be very high, and voting rights experts are worried that the state won’t be able to handle it. States like Indiana and Georgia that have new strict ID laws are also a concern. And of course Ohio and Florida given their history, not to mention that early voting in Florida has already seen extremely long lines.

What will happen with the footage after Election Day?

We plan to cut thematic pieces about the major problems that arise and use those to educate the public and policymakers about the need for election reform. We think video can play an important role in telling the story of the changes that need to be made in our election system. While the bulk of our volunteers are active on Election Day, Video the Vote is part of a coalition of groups working year-round to make improvements to our democracy. We want to put ourselves out of business; in an ideal world, there wouldn’t be a need for a project like this in the first place.