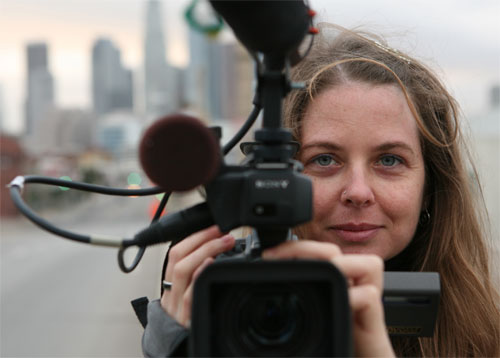 Made in L.A., produced and directed by Almudena Carracedo and produced by Robert Bahar

Logline: Three immigrant women experience a personal transformation as they organize for their rights.

Length of editing: One year

Length of time: Five and one half years.

During the first four years, funding came from individual donors and small grants; full completion funding came from ITVS, POV (as part of their “Diverse Voices Project”) and the Sundance Institute Documentary Fund.

Almudena read a story about garment sweatshops in Los Angeles and set out to do a little film for the workers to use as a tool to organize. With time and in collaboration with her creative partner Robert Bahar the film grew into a feature-length, character based verité documentary. Before that…

Beyond academia: Almudena was an activist in Spain, and also worked in commercial television directing programs for broadcast on Canal Plus and the first edition of Spain’s Big Brother. In 2000 she “escaped” a promising and potentially lucrative career in television and came to UCLA to work on a PhD dissertation about border documentaries. But in the process, she started making documentaries about border subjects!

Survival strategy: Almudena worked as a Teaching Assistant at UCLA for the first four years of production of Made in L.A. “I worked part-time and devoted the ‘other 60 hours of the week’ to Made in L.A.”

Previous films: Welcome. A Docu-Journey of Impressions was a short documentary about Tijuana. A cross between a personal film and an experimental documentary, the film won Silverdocs Sterling Jury Prize for best short subject and also served as her schooling in cinematography and Final Cut Pro.

Almudena describes two smart moves: first when, about a year into the shoot she realized that the characters and story could support a feature and decided to embark on a longer process –and sought help and a producing partner. In collaboration with producer Robert Bahar, they reframed the project to make it “bigger” and to reach a wider audience even though that meant more work and raising more money.

It was tough to go for bigger when the end could have been around the corner. The temptation came back when they thought they were done but the response to the fine cut was less than what they expected. They didn’t settle for “good”, they kept going. The ultimate smart move was understanding their material deeply enough to know when they had the film they were looking for.

“I don’t think there’s anything specific I wouldn’t do again. But there is a natural maturing and learning process that takes place over the long journey of making a film, and I have tried to put special emphasis on learning the dos and the don’ts. It’s so important to choose your collaborators carefully and also to try very, very hard to be a really good collaborator yourself. Whenever I have faltered on either point I’ve regretted it!”

Made in L.A. premiered at the Silverdocs Documentary Festival in June 2007 and screened immediately thereafter at the Los Angeles Film Festival. It had its U.S. broadcast premiere on PBS’s POV series the day after Labor Day 2007, receiving critical acclaim from The New York Times, Variety, and The Los Angeles Times, just to name a few. Following the broadcast, Made in L.A. has screened at more than 50 international film festivals, winning many other awards including a Henry Hampton Award from the Council on Foundations. Perhaps most thrilling, Made in L.A. just won a national Emmy Award at the News & Documentary Emmys in New York!

In addition to the film’s broadcast and festival life, Almudena and Robert are currently engaged in an innovative DIY distribution initiative and have screened the film at hundreds of community and educational venues across the country.

Almudena remembers showing the film to the three main characters when it was, at last, almost done: “It was really scary, but they loved it and didn’t want me to change a thing. Feeling that I had honored their journey and that they were proud of the final result was a huge satisfaction – and a great relief!”

Now a year after finishing Made in L.A., Almudena has started to forget the pain of delivery and is slowly starting to contemplate other projects. Her day-to-day work, however is 150% Made in L.A.: “Our community engagement campaign gets to the very core of why we made this film and why we believe it can make a difference. This is one of the most beautiful parts of the process: when you see, with your own eyes, the impact that the film can have on people. It makes you feel, truly, that all the sacrifice and all the tears and challenges of the process were not in vain, and that the journey was worthwhile!”

Other information: The Doc will be in UK in the Fall, more precisely teaching her trailer workshop in Edinburgh, Scotland and lecturing at Sheffield Film Festival in England. For details check www.documentarydoctor.com

Doctor’s Credentials: Internationally renowned author and story consultant Fernanda Rossi has doctored over 200 documentaries, scripts, and fundraising trailers including the 2007 Academy Award® nominated Recycled Life by Leslie Iwerks. In addition to private consultations, lectures, and seminars worldwide, she has served as festival juror and grant panelist. Ms. Rossi shares her knowledge and research of story structure and the creative process in columns and articles in trade publications. She is also the author of the book Trailer Mechanics: A Guide to Making your Documentary Fundraising Trailer. Learn more about the Doc at www.documentarydoctor.com.

See the trailer for Made In L.A. here.