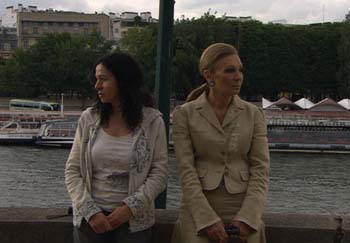 A still from Seventh Art's recently released film The Queen and I.

Seventh Art Releasing is a distributor and sales company founded in 1994 by Jonathan Cordish and Udy Epstein. The company is known for distributing award-winning documentaries and fiction films, many dealing with Jewish culture, lesbian and gay issues, human rights, music, and popular culture. Exactly a decade since their last interview with The Independent, co-founder Udy Epstein talks about the how Seventh Art Releasing has changed over the last 10 years, but more importantly, how its vision has stayed the same.

How would you describe Seventh Art Releasing?

We are basically a full-service independent distributor of mostly documentary films, but we do fiction as well, including non-theatrical films.

Since your last interview with The Independent in 1999, how has Seventh Art Releasing changed?

Obviously, the marketplace has changed dramatically in the past 10 years, and not necessarily for the best. The interesting part would be that in terms of size, scope, and areas of interest, Seventh Art has not changed that much. In terms of operations and media, of course, there’s a huge difference. But we’re pretty much the same size company we were 10 years ago, dealing with similar sized films. We stayed away from the Hollywood game, to the point that people still think we’re based in New York, even though we’re based in Los Angeles. We devised ways to work and market and distribute in all media. Since we were already thinking that way 10 years ago, it was easier for us to adjust to the changing marketplace, the harder times, the increasing costs. We work a lot with producers, which is probably the most significant change. We still have a fully functional theatrical system with marketing, PR, and all those things that are required to run a theatrical company.

We have many more, but again, it’s a combination of feature-length films, one-hour television specials, and shorts. When I said we had 30, I meant full-length films. Our library now is about 10 times that, but a lot of that is shorts. But our library now is somewhere around 300.

From 10 years ago, a lot has changed. There’s myself, James Eowan, Oliver Ike, our head of theatrical sales, and we have Shane Griffin, our head of sales and acquisitions. Those are the more important people.

How have the Internet and new technology changed Seventh Art Releasing over the past 10 years?

Obviously, we use it a lot for research, marketing, and that kind of thing. The big news is that everyone’s hoping that the new technology that’s already here will revive independent content. Marketing costs in traditional media are such that a lot of sensitive delicate content can’t get on mainstream. But everyone in the independent world figures that through streaming and the Internet you can get to whoever is interested in your content. Nowadays with streaming, with download to view, download to burn and all those options, that is in theory smart and the way of the future. But for some reason, that I don’t think anyone can explain, it’s not quite monetized yet, to the level of filmmakers that we serve. That’s an issue that’s of great concern to us. And I hear from a lot of companies, bigger and smaller than us, on the video side, on the educational side, that are all saying the same thing. The actual amount that our kind of films generate from new media is not yet sufficient. Having said that, it’s not that we don’t have any new films from there. We work with Netflix and iTunes to promote our films, and definitely, that’s where the tide is turning and the new media are definitely where we’re going with this.

What are some films that you’ve distributed recently?

We’ve been working on a documentary called The Queen and I. It’s about the life of the Shah, the ex-leader of Iran, who was ousted in the Islamic Revolution. He’s dead, she’s still around, and she speaks about her life. This was the first time she was willing to expose herself. The film’s director was another Iranian expatriate.

We also just premiered Bloody Mondays and Strawberry Pies, narrated by John Malkovich. It’s an essay about the meaning of life and the meaning of time and boredom. It’s cerebral, but it’s an exciting and invigorating film. Clearly, not a film in the Megaplex near you, but a film for students and people like that, looking into interesting and challenging material. It’s a pretty exciting film.

How do you locate films to screen, and how should filmmakers approach you for consideration? What’s the process for selecting a film?

We go to a lot of film festivals around the world, and screenings that we’re invited to, and we look at stuff that we like, and we follow it from there, and we also get submissions from people we know, and sometimes from people we don’t know. We’d rather people tell us what the film is before they send it over to us, and we can save them time and money if it’s not suitable. We do accept unsolicited submissions because we’re smaller. Once companies are bigger, there are all sorts of legal issues about being able to do that. If you look at a year, we probably look at thousands of films. We also look at works in progress, because of the production work we do. There’s a lot to look at, and that’s part of the process. It’s filtering stuff for that .1 percent that’s actually suitable for us, so it’s a lot of work, and it’s very hard to know where you’re going to get your next films from. All you have to do is go to our website, email, and tell us who you are and what you’re interested in, and we’ll look at it and if we’re interested, we’ll contact you.

What advice would you give to independent filmmakers who are approaching you with their films?

If you’re approaching any company, you need to know a little bit about what they are and what they have done. You need to know what films they’ve done, get a feel for what it is you’re asking of them, if there’s a potential fit. Research is very important—and to see what’s going on out there, to be involved and in the know about things.

What do you think is the most important social issue being addressed by the independent filmmakers whose works you distribute?

I’ve been known over the years for being, let’s say, a realist, so I don’t want to tell the filmmakers to make a film about something just because the subject is important. We’re not nonprofit, we’re not funded by any state funds. But I can tell you from a personal standpoint, a lot of the films that we’re handling right now have to do with the environment. We try to be realistic about what we do, but we’re also motivated in our selection by issues, so we’re an issue-driven company, for most of our films. But sometimes we take fun films that aren’t about a big issue, but are just good films.

What makes Seventh Art stand out from other independent distributors?

I think we blend very interestingly theatrical sensibilities and educational sensibilities. Usually it’s very clear-cut. If you’re theatrical, you work at a different level. If it’s education, it’s a whole different ballgame. But we’re blending the two. We want to give our films a traditional release, which is a very smart thing to do, but our content is less commercial and more sensitive. Those are two legs, and the third leg is that we’re from a production and filmmaking background. It creates something that’s at least unique. For that matter, I’ll bring another film title into the fold. Family Inc. it’s not a theatrical film, but we’re helping to finish it, and it’s been mostly edited in Hong Kong. It’s really a global story that’s very hard to explain, to define, but it’s sort of a film with Asian-American sensitivities in a global world. So we stand out because of our ability to keep uncompromising content alive in the very, very tough reality that we all face right now. And we, like anybody else, but even more so, definitely feel the economic pinch.

What would you say is the most important issue facing Seventh Art today?

We want to keep doing what we’re doing in terms of promoting the same kind of content: mostly socially responsible documentaries. We need to be able to keep our head out of the water and survive this hard economic time.

Where do you see Seventh Art ten years from now?

I don’t know. I mean, it’s hard to predict. The way I see it now, beside the fact that we want to survive, we don’t have any big game plan to grow, to deal with mainstream, big production, Hollywood and all that. Our focus is to stay the course. Of course, there will be a lot of changes: changing economy, changing reality, changing of the new media, all the commercial implications, all of the changes. But in terms of the overall view, it’s almost like the more things change, the more they stay the same. We’re very confident being where we are. We started this company to service a world-view, and now we’re looking back, and it’s still there. We want to keep that going.

Anything else you want the world to know about Seventh Art?

We make great coffee here. We have an espresso machine we got on Craigslist. It’s probably the best coffee you can get in any distribution office. We don’t go to the Evil Empire anymore. We don’t work for the man. We make our own coffee.