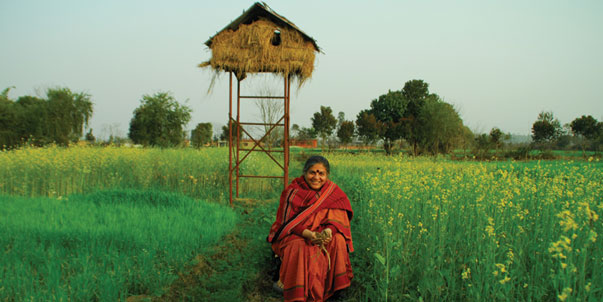 Dirt! The Movie does more than just preach, it tells the story of people's relationship to the earth.

Independent filmmakers aren’t afraid to get their hands dirty.

Dirt! The Movie, which was based on William Logan’s book Dirt, the Ecstatic Skin of the Earth, both explores the history of dirt and educates viewers about the abusive farming practices and urban development that have contributed to our current soil crisis. Rosow and Benenson traveled to more than 20 locations all over the world to film people who are making an effort to preserve the dirt beneath our feet. From prisoners in New York who participate in gardening programs to children who eat from “edible schoolyards” to Indian villages experimenting with new, environmentally responsible gardening techniques—Benenson and Rosow filmed people who are finding a way to make a difference.

Rosow hopes that the documentary, which is slated to feature at the Maine International Film Festival later this month, will inspire viewers to think more carefully about the impact that dirt has on our world. “When you read the book, you never look at the ground the same way again. That’s what we hoped to do with the film, and it seems to be working,” Rosow said.

And that’s why Dirt! The Movie is not just a movie. Like many documentary filmmakers these days, Rosow and Benenson are working on turning their film into a media project, which they hope will further encourage people to get involved. Rosow said that they are working on turning their website (www.dirtthemovie.org) into an interactive space where visitors can schedule their own screenings of the film and have access to community action toolkits. Rosow and Benenson are also cycling the profits from their film back into environmental education projects.

Rosow said that including social commentary in his films is important to him. “We’re filmmakers, so we make films. A lot of it is the art of it, but you also want to say something and communicate,” Rosow said.

Part of the charm and appeal of Dirt! The Movie is its sense of humor. That becomes apparent in the trailer for the movie (view the trailer here), which reads, “If you are searching for action, adventure, romance, surprise…If you like to get dirty…have we got the movie for you!” Rosow believes that humor is an important part of many documentary films.

“Music, humor, and a sense of wonder,” said Rosow, listing important qualities in his film. “Documentary films tend to be so much about the topic, and also the story-telling….[Dirt! The Movie] reaches an audience in a way that’s delightful and fun to watch, and you come out with a great experience.”

Audiences and critics would certainly agree with Rosow. Dirt! The Movie was shown at Sundance and just won the audience award for best green documentary at the Mali International Film Festival. It will appear during the Docuweeks festivals in New York and Los Angeles this summer, the DVD release is slated for late August, and a shortened version will run on PBS next Earth Day. The film was mentioned in the Los Angeles Times as one of the best documentaries at this year’s Sundance, and local ABC news in Berkeley highlighted the movie in a story about the dangers of neglecting the earth’s soil.

But Dirt! The Movie wasn’t an assured success. Instead, it happened almost by accident. The seeds of the film were planted when Benenson, who was working on a feature film with Rosow, got his hands on a copy of Dirt, the Ecstatic Skin of the Earth.

“I asked Benenson, ‘Do you think there’s a film in there?’ He said, ‘Absolutely,’” said Rosow. “All our friends and family were astonished. They said, ‘What, you want to make a film about dirt?’ We said, ‘Yep.’”

As someone who taught history at UC Berkeley and once considered being a scientist, Rosow was fascinated by the historical, scientific, and environmental elements in Logan’s book.“It had science, spirit, history, and real challenge to a filmmaker,” Rosow said. According to Rosow, the most challenging step in turning the book into a movie was how to turn it into a story.

But in fact, the two filmmakers managed to use the movie to tell many stories about people from all over the world. Rosow said that as they traveled to other countries finding material for their movie, he was fascinated by the many intriguing people and stories he encountered.“The coolest thing about this film, and very often for any documentary filmmaker, is you go out and meet people,” Rosow said. “We’re documenting a situation—well, it’s scary what we’re doing to the earth, but there are people with answers….each one was delighted we were making a film about dirt.”

So what’s Rosow and Benenson’s take-away message? It’s simple: educate yourself and get involved.