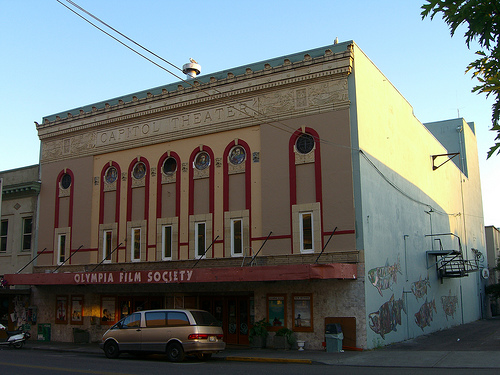 The Olympia Film Society (OFS) has been bringing independent, experimental, and underrepresented film to the Olympia, Washington community since 1980. The society programs the Weekly Film Series, a series of independent and international films that sometimes includes one-time screenings and discussions with filmmakers. OFS also programs the annual Olympia Film Festival, which attracts 5,000 to 7,000 visitors per year and promises 10 days of non-stop film-related festivities. (This year’s fest takes place November 6–14.) Both the festival and the series are housed in Olympia’s 85-year-old Capitol Theater.

The Independent spoke with Helen Thornton, OFS’s film programmer, about the Society, and how filmmakers can have work shown at the theater.

What’s the process for an independent filmmaker approaching you about showing a film in your theater?

For the series film program, which is year-round, the filmmaker just needs to e-mail me with his or her request. I will sometimes request a DVD screener to look at, especially if there is not yet any press or reviews about their film.

How selective are you? What should potential filmmakers expect?

I try to gauge if the film/video will be something that will draw an audience or if the subject or genre is unique or experimental.

What format should filmmakers submit their films in?

What kinds of films do you most like to show?

How many screens does your theater have?

We have one screen; our theater seats 750.

What technical facilities does your theater have?

What advice would you give filmmakers who are approaching you with a film?

The more information on the film/video that a filmmaker can provide me, the better.

What is your philosophy as a theater?

We try to screen underrepresented work.

Where do you see your venue in 10 years?

We are working on having a digital cinema system and on drawing audiences that are increasingly more diverse.

Tell me a bit about the Weekly Film Series versus the annual Olympia Film Festival.

The Olympia Film Festival is a 10-day film festival [that takes place] once per year. We have had 25 Olympia Film Festivals so far. The film series runs year-round, and we usually screen two per titles for a week’s run. However, the series program does screen some titles for one-time showings, especially with Q&A with the visiting filmmaker.

Which one do you think is better for the aspiring independent filmmaker to submit his or her work to?