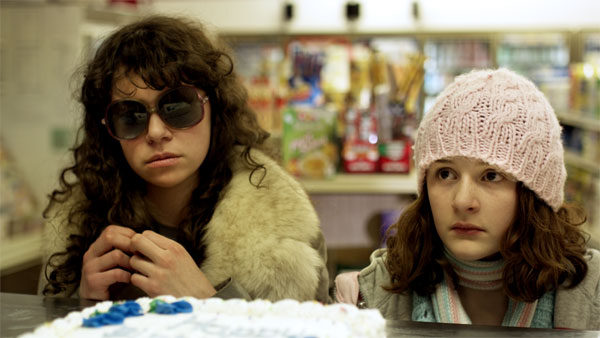 "Grown Up Movie Star" was one of Shechter's favorite narrative films.

Editor’s note: Below is just a sampling of Shechter’s Sundance account. For the whole enchilada, visit her blog.

After seven years of volunteering for the festival, I’m here as a civilian filmmaker for the first time which means I no longer have to work every day! Yay!

On the other hand, I also no longer have free housing in a chalet with a private bedroom; free admission to all the films I could wait-list myself into; a Kenneth-Cole-designed staff ski jacket; and the intangible but perhaps most important inside scoop on everything happening at the festival that only a network of 1,500 volunteers can get you. Basically I am now on the living room couch and have to pay for my own film tickets.

I got up at 7 am to line-up for two hours, pitched excellently to three funders (see below), had lunch with an awesome producer from NYC, schmoozed and drank at the Sundance Channel party, met up with my distributor who took me to the Chicken & Egg party (where I met some of the coolest women and men at Sundance), taped a fantastic interview with a 30-something abstinent Mormon woman who was actually willing to talk on camera for my documentary “How To Lose Your Virginity,” and had a restorative hot tub at 2 am with my housemates. And I had potato skins for the first time in years, which I felt I totally earned after all my exertions so back off, healthy judgmental people.

The documentary funder pitches, always an important part of the festival, were the biggest reason for being here. This is an annual event/zoo where 10 of us gather around a big round table with funder or broadcaster and have five minutes to impress them with the fabulousness of our project in the hopes that they’ll pull out their wallets right then and there and give us $300K. About as likely as some guy offering you a giant diamond ring after one session of speed-dating, which offers some insight into the dynamics of the thing.

These sessions are like dating and the funders strongly resemble the archetypical aspirational boys of my youth.

There’s Funder Type 1, who reminds me of the kind of guy often played by James Spader in John Hughes films. He’s got the fancy car and the white blazer and we’re all supposed to be impressed with his giant endowment. Every question I ask is answered with, “It’s on the website,” and finally they just tell me not to contact them for a couple of months because they’re, like, really busy. A reliable source said they wouldn’t be interested in my film anyway, so I’ll just go back to my room and make my pink prom dress and…oh wait, that’s another story.

Funder Type 2 is the smart, cute, and friendly guy who I’m sure would totally dig me if only he knew I existed (sort of like John Cusak but not as pathetic) When I do meet him, he’s just as cool as I thought, but he’s got tons of friends and is pretty picky about making new ones. So I smile and gush and think I made a total fool out of myself but then (yay!) he introduces me to his friends and invites me over to listen to Phil Collins — I mean, asks me to send them a previous work sample.

Funder Type 3 is like someone I once went out with who I was sure wasn’t really that interested. But when I run into him he wonders why I never called because he thought I was so cool and funny but the timing wasn’t right, you know? (Are you still with me in this metaphor cuz I’m looking for that 80s film character…) Translation: although last year’s grant application was turned down, they only encourage some people to apply again — like me. So I will. FYI This tiny bit of information managed to suspend my self-loathing for at least a week.

The festival seemed noticeably emptier this year, maybe because a lot of people came for the weekend and quit the fest on Monday and Tuesday. By Wednesday, I could get into almost any film through the waitlist lines without a problem. Some of my noteworthy films include (all but one are docs):

Exit Through the Gift Shop:

This documentary, directed by the anonymous British street artst Banksy, is going to be a monster hit. A history and celebration of street artists and a scathing commentary on the business of modern art, it tells the fascinating story of Mr. Brainwash who is one crazy-ass Frenchman.

His & Hers:
This beautiful, moving, and unassuming Irish documentary is a series of 70 short interviews with girls and women about the men in their lives. Arranged chronologically from a smiling baby to chatty toddlers and teens to moms to grandmothers, the characters in this film blew everyone away. I have no idea where or if this will be released in the US, but if it is go see it. It’s a jewel.

Grown Up Movie Star:
My favorite narrative pick, this coming-of-age film takes place in Newfoundland and has performances and a script that never goes near the obvious. It’s fresh and delightful and surprising and disturbing and I can’t wait to see director Adriana Maggs’ next film. This one just opened in Toronto so go see it. Right now.

This doc is about the Ft. Pierce, Florida intersection that gives the film its title — and what goes on in the two small buildings on either side of the street. On one side is an abortion clinic, and on the other side is a crisis pregnancy center which exists for one reason: talking women out of having an abortion at that clinic. In the middle are the mostly lower-income women who are pregnant, don’t want to be, and are looking for help. It’s an astonishing and sad verité film from the makers of Jesus Camp that shows how very little common ground there is when it comes to abortion. I wrote a longer post about this on my blog and it will be on HBO.

8: The Mormon Proposition
Probably the most intense and emotional screening I went to, this documentary shows how the Mormon church, in violation of church/state separation and tax-exemption laws, funneled millions of dollars into the campaign to strike down same-sex marriage in California. It also details the daily persecution that gay Mormon youth face in Utah, resulting in one of the highest youth suicides rates in the country. One of the film’s same-sex couples and the parents who love and support them attended the screening. If someone from the Church was there, they didn’t make themselves known – no doubt because they didn’t want to be torn apart by the angry mob. No distribution yet, but I’m sure it will get picked up soon.