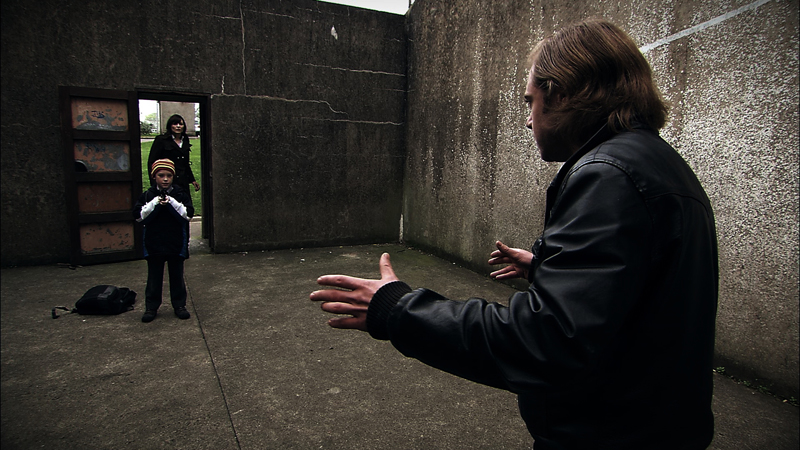 Showdown in "The Crush."

As an “ad man by day,” filmmaker Michael Creagh had been “tinkering with ideas and scripts” for several years before acting on his dream. His debut film The Crush tells the story of an eight-year-old boy (played deftly by Creagh’s son) in love with his teacher. When the boy’s gift of a toy ring is outdone by an engagement ring, he plots his revenge against his nemesis. Since making the film which he self-funded, Creagh now freelances as an art director and plans to bring writing and directing to the forefront of his career. Here, he talks about making his first film, which screens through May 2nd at the Tribeca Film Festival.

What inspired you to make this film?

I’d watched a lot of shorts and was often disconcerted by how 15 minutes could feel like half an hour. I wanted to do something that was unashamedly entertaining. I didn’t want to be arty or experimental. I just wanted to prove I could tell an engaging story. The art can come later when I’ve got the hang of the craft! I got it into my head that I wanted to make a mini-movie that had a three-act structure, turning points, character arcs, and all that malarkey. I’d no idea whether this would all be too much to ask of the 15-minute form.

The story came to me one night on the train home from work. I thought a tale about a wee boy with a crush on his teacher could have lots of charm and audience appeal (yes, I fear I was that calculating). But I wanted to give it some strange twist that I’d never seen before. The idea to merge a boy with a crush with the familiar adult theme of love rivals, men battling for the affections of a woman, just gradually came along. By the time the train arrived in the station I had the basic story line worked out.

With all the publicity given to guns at school (at least here in the U.S.), I assumed the gun in your story would be real, whereas 20 years ago people would have probably assumed the opposite. I’m interested to hear if that came up in the writing of the story?

I grew up in Belfast so I also come from a culture that expects the gun to be real! And I have to admit I deliberately played with that uncertainty. Some people who read the script early on told me I should have the boy kill the boyfriend. That it would send out a stronger message. But that was completely unthinkable to me. I wasn’t writing a tragedy or trying to say something about underage gun crime. I was writing a love story.

Tell me a bit about how you cast the film.

The boy is my own son, Oran. I know I should have cast around all the stage schools and drama clubs but I’d promised the poor little bugger I’d put him in the film and I couldn’t go back on it. This was when I thought I was making something small that might be more suited to YouTube. Luckily for me, he turned out to be amazing. When I tested him he just had this lovely dead-pan intensity that could swing from sweet to menacing in a heartbeat. It worked. And I could pay him in Lego and DS games! The rest of the cast I found with the help of casting agent Thyrza Ging who just seems to have a sixth sense for who’s right for a part. She pushed for Rory Keenan and he was utterly brilliant. As were Olga Wehrly, Charlie Bonner, and Neili Conroy. I couldn’t believe my luck getting such proper actors on such a low budget. And they made working with an inexperienced child actor so much easier because they just helped him along at every stage. And, truth be told, they made an inexperienced director feel better too.

What was the production like for the film – how long did it take you, how did you fund it, etc?

Preproduction meandered for about a year as I searched for a willing producer. But once Damon Quinn came on board everything began to move apace. The shoot was so much fun it hardly felt like work. It was a bit of a family affair with my son in front of the camera and my brother Jim (a BBC cinematographer) behind it. And it was an all-Ireland affair with half the crew from the South and half from the North. We did it in three days. The first was intense and terrifying, the second was so relaxed we had an extra long lunch in the sunshine.

I didn’t get any funding due, in varying measures, to missed deadlines or not having any track record or not fitting the theme set by the film board in that year. So I decided to go the self-financing route: some savings and a big bank loan. The movie is still heavily in debt but hey ho. It can’t be unmade now!

How has the Tribeca experience been?

I’m not there yet. Myself and Damon will be flying over on Thursday and staying till Monday. It’s very exciting and a bit unreal. I’m bringing a big permanent marker just in case Robert DeNiro appears and agrees to sign my forehead.

After Tribeca the film will go on to Seattle. And I’m still beavering away on Withoutabox entering as many festivals as possible.

What’s your next project?

Lots of ideas taxiing around on the bedside table. But I’ve had a feature screenplay written for a few years now set during the Irish Famine that I’d dearly love to get off the ground. I’ve never understood why the Famine is still missing from the cinema. Perhaps its the difficulty in casting malnourished actors or the fact that an audience might think it’s too depressing. But I definitely think the time is right for it. Maybe we should see a movie about a time when things were a hell of a lot worse than the 2009/10 recession. But, like The Crush, I’d still want that movie to end on a note of hope and humanity.