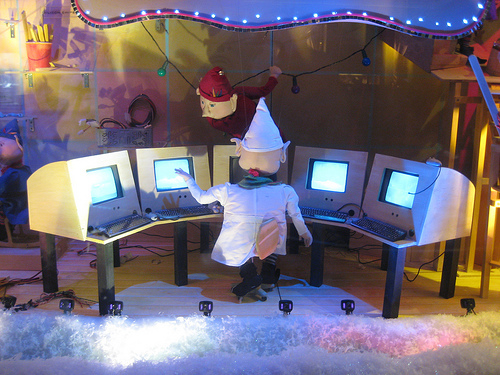 Doc Doctor suggests balancing techno-perfection with believing in the magic of post. (Photo by angusf.)

“All technical glitches, or disasters, can be avoided with preparation.”

Wait, what about those who say:

“Obsessing over technology is a waste of time I could devote to the story.”

Two opposing myths: the first one, the self-assured cry of the virtuoso or technophile, the second, the snide remark of the dilettante or technophobe. Surprisingly, both utter the same opening statements, but with different endings. “Burn out images? Deafening background noise? Oh, details, details!” they could say in unison. While the first group responds to the challenge with a confident, “We’ll fix it in post,” the second group will retort with disdain: “All it matters is the story.”

Can a story really be really fixed in post? If not, can a story be appreciated and understood through its technical mishaps? Stories may be king, but kings rule with their imposing presence.

The wave of post-production gadgets, which promise to fix it all, has reached such heights that many live under the illusion that mastering the tools for storytelling is a nuisance that can be dealt with later – much later. “We’ll fix it in post” or not caring to fix it ever, because “all that matters is the story,” are dangerous myths that reveal their truths when balancing the budget or having the audience walk out. Let these myths be unmasked so the story will come out loud and clear…and without the extra charge.

The dilemma of content or form, the message and the technology that carries it, and the even more insidious sheer creativity versus sheer craft, is not new. Each era has gone through its stage of alternatively glorifying one and then the other in unfounded, mutually exclusive opposition. After all, the story shapes the medium as well as the delivery technology and the medium with its delivery technology shapes the story, more famously said in the words of Marshall McLuhan, “The medium is the message.”

Still, from the moment the caveman (or maybe it was a cavewoman) grabbed a stone to draw on the walls of the cave, some other cave dweller questioned everything from the genius or virtuosity of that first proto-artist to the meaning and quality of the drawing. And so on throughout history. It’s probably human nature to question and create dualities.

Today, the argument might be old but the amount of technology available, and our fascination with it, renews the discussion with fierce intensity.

In documentaries, it used to be that the truthful depiction of reality superseded technological perfection. Those days might be over. Many things can be fixed in post, from color to sound, from erasing undesirable logos to enhancing almost inaudible dialogue, viewers are more demanding than they used to be. And so are distributors and everybody else in the industry.

At the same time, there is a limit to what can be done in post and more importantly, there are both material and creative costs to the storyteller.

Underneath the many real and apparent benefits of taking care of things in post, there is the issue of whether, ultimately, a story is well served with the many layers of post-production intervention.

In art, there is a distance between the hand of the artist and the object of art. A painter may have just a brush between her hand and the canvas. A writer has a mere keyboard between the 10 fingers (or two indexes) and the white screen.

Documentarians have a huge distance between themselves and the film or the finished film on the screen. The process in itself may be as long as writing a novel, yet the number of tools needed and people involved, even when minimal, most often outnumbers the needs of tools and people for other artistic mediums. This separation has been widened with the advent of gadgets, and like all tools, they can be used for good or evil.

The consequence for the storyteller is that some filmmakers fear the vast distance ahead of them and dismiss it altogether, hurting the chances for the story to be as enthralling as it could be. Or such a gap – we fix it later – becomes an excuse to relinquish control and ease creative anxiety.

Fortunately or unfortunately, the story is of utmost importance and the quality of the media used to tell it is not a far-off, secondary concern but an equally important one.

While some filmmakers prefer to care about the character or interviewee, leaving them in half-light and un-miked, others may adjust that corner light obsessively, forgetting that an incredible moment is just passing by unrecorded. As often is the case, the solution is not in the extremes but in a healthy middle path.

In practical terms, turning off the fan that creates background noise takes one minute and costs nothing. Dimming that same sound in post, if doable at all, can take several hours and the fee of the person doing such task. So why not make a checklist for image and sound with minimum requirements. Room tone, anyone?

As per helping the technophobes bridge the gap, why not chat with some post-production people to learn the basics of what can be done just in case? Preparation is key on both sides of the myths.

The ultimate task of the storyteller is to, well, tell a story. In documentaries, since the events unfold uncontrolled by the filmmakers, capturing them is their most important task. Doing it well is part of the job. Imagine Van Gogh not caring about the shade of yellow he’s is using. Would it be a Van Gogh even if they’re still sunflowers?

Post-production magic is a safety net, not the destination. And a safety net is a welcoming place for both geeks and technophobes.

In a calendar where there are as many holidays as release dates for software, may filmmakers choose to put the tools at the service of their story and may they upgrade their post toys as often as they question the stories they’re telling.

Doctor’s Credentials: Internationally renowned author, speaker and story consultant Fernanda Rossi has doctored over 300 documentaries, scripts, and fundraising trailers including the 2009 Academy Award® nominated The Garden by Scott Hamilton Kennedy and the 2007 Academy Award® nominated Recycled Life by Leslie Iwerks. In addition to private consultations, lectures, and seminars worldwide, she has served as festival juror and grant panelist. Ms. Rossi shares her knowledge and research of story structure and the creative process in columns and articles in trade publications. She is also the author of the book Trailer Mechanics: A Guide to Making Your Documentary Fundraising Trailer.