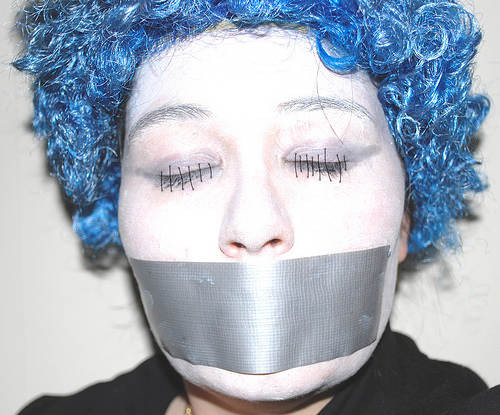 Does "The Take-Back Manifesto" put a gag order on indie filmmakers? Photo by Mrs Raggle.

“Can we get back to talking about movies, please?”

So concludes The Take-Back Manifesto, filmmaker/blogger Michael Tully’s biting critique of the growing preoccupation with trendy “connectivity” tools like Twitter in the independent filmmaking community. Rife with jabs at the plethora of panels on social networking and various new media modes of publicity and marketing, the “manifesto” showed up on IndieWire and Hammer to Nail earlier this spring. I stumbled upon it through GreenCine blogger Vadim Rizov’s like-minded rant against “the panel movement.” Rizov signed Tully’s manifesto, as did Turtleneck Film’s Tom Russell.

The main concerns of the manifesto are that filmmakers should stop: 1) complaining about the great expense of filmmaking as well as asking for money to cover those expenses, 2) sharing the stories of blood, sweat, and tears shed during the filmmaking process, especially when such tales relate directly to #1, and 3) turning to panels, conventions, and symposiums on networking, marketing, and publicity for advice on getting their films out there.

I read The Take-Back Manifesto soon after I finalized plans to write for The Independent this summer. Knowing that one of my main focuses would be on the changing trends in independent film distribution, I was struck by the counter-intuitiveness of Tully’s wish to silence those who talk about “the mystery, the power, and magic of cinema” in the name of marketing their films. This sentiment is antithetical to the goals of The Independent’s readership: filmmakers who know that finding distribution frequently means starting the process of talking up your film long before the wrap party.

This summer, I will report on stories that fall outside of the scope of the manifesto: for example, the interactive web documentary Prison Valley, which gathered a community through Twitter and Facebook during the viewing experience. Prison Valley’s presence on social networking sites helped to attract a distribution deal with Arte TV, begging the question, does the “magic of cinema” really begin in the darkness of the theater, as the manifesto dictates? Or does it originate with the spark of imagination or call to action that inspires a film project—a spark that has, undoubtedly at times, been nurtured during conversations about making (and distributing) movies?

The self-righteous tone of this hot and bothered list of accusations irked me, but even more unsettling was its complete dismissal of the realities of contemporary independent filmmaking. Rather than convincing me that we need to “get back to talking about movies,” the manifesto exemplifies the anxiety that comes with the fact that what it means to talk about movies is changing. YouTube may launch the next Justin Bieber lookalike’s 15 minutes of fame, but it’s also a legitimate source of art, worthy of a Guggenheim biennial, another subject I’ll write about this summer.

Changes in how we think, talk about, and make movies, including increasingly necessary if unglamorous (“low”) forms of publicity like Twitter, are disconcerting to the likes of Tully, Rizov, and Russell, who encourage sympathetic readers to join their ranks by signing the manifesto. Yet these three are bloggers, after all, and surely know the potential for building online communities of filmmakers and fans better than anyone. It made me wonder what’s to be gained from valorizing old-fashioned models of distribution and marketing over slippery emerging ones?

It’s only through grassroots tinkering that new forms become authentic. Even if the panels the manifesto detests are too many in number and too superficial in content, Tully’s solution that “the sharpest, most appropriate brains will solve the technological “kinks” that inspire all the how-to Twitter talks is vague at best, and certainly does not credit filmmakers with the ability to work out these “kinks”—or rather, to actively shape the role of new technologies in the production and distribution of their art.

While I can understand being fed up with time wasted talking about “how to use Twitter,” Tully’s diagnosis of a “corporate, numbers-before-content mindset” is misguided. Twitter is free. Spreading the word about a film using free, easily accessible networking sites hardly seems corporate. In fact, when the manifesto proclaims that “the final product is all that matters,” I’m reminded of the insatiability of capitalist consumerism and what gets lost in that process. Effacing the human labor poured into a product unless that product proves lucrative sounds pretty “corporate” doesn’t it? When it comes to social media and networking, perhaps The Independent writer JBlair Brown put it best when s/he wrote in Building an Audience with Social Media: “It takes effort, resourcefulness, time and a lot of patience… but, when used correctly, social media can prove an effective tool to accomplish your goal: to have your film viewed by a vast audience–and isn’t that the whole point?”

Ultimately, The Take-Back Manifesto’s crippling flaw is that it bemoans the sorry state of independent film by complaining about filmmakers who complain too much. Tully later referred to his choice to write a “frustrated rant” in the form of a manifesto as intentionally “corny”—corny, no doubt, because the manifesto is seen today as a hackneyed, outdated, ineffective rhetorical device. Its heyday has come and gone. Ironically, then, Tully’s tongue-in-cheek revival of the manifesto ends up pointing to how similarly outdated some of his sentiments really are: there’s no going back to talking about movies as if the Internet never came to be—there’s only going forward to talk about movies using the new tools and forums that we have the ability, even the responsibility, to shape and explore.

2 Responses to “No Thanks, Take-Back Manifesto”