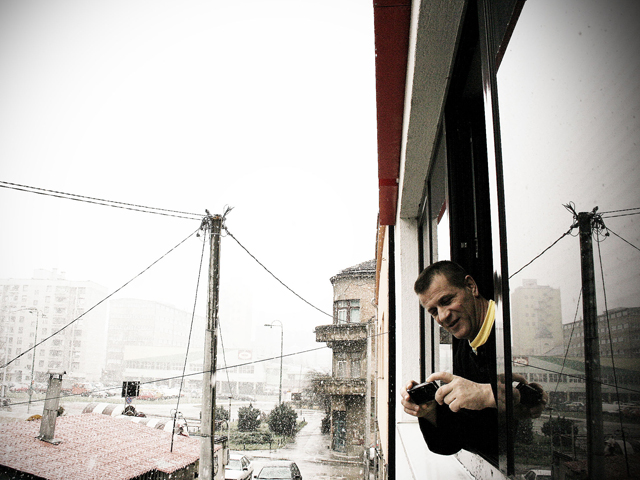 Bosnian filmmaker Nedžad Begović has a knack for taking his own life as a point of departure for films that end up being about much more. And he’s not shy about his intent or the company he wants to keep. In his 2005 documentary Totally Personal, about about his childhood memories and personal philosophies, he proclaimed, “With this film, like Andrei Rublev by Tarkovsky, I want to make my bell.”

His weighty reference, about a young man who casts the town’s bell and himself as an artist, out of sheer will and faith, may evoke skepticism from those who hear the premise of Begović’s most recent film, Mobitel (A Cell Phone Movie), which premiered at this year’s Sarajevo Film Festival. (Days later it would win the Heart of Sarajevo Award for Best Documentary.) Ok. But Tarkovksy…and cell phones?

Diagnosed with angina in 2008, Begović’s doctor instructs him to begin an intensive walking regimen. As we all would, Begović brings his cell phone on his long walks. Over the next three years and 3,000 kilometers, Begović records hours upon hours of visual footage with his top-notch camera phone. He also records audio from hundreds of phone calls. Mobitel is the hour-long end product of this painstaking record of his life.

Even for those familiar with Begović, this premise could have gone awry in a number of ways. It could have turned into a mindless montage of self-help rhetoric, or a preachy contemplation of the alienating effects of today’s forms of communication. It could have lamented the fact that there is no 35mm camera in Bosnia-Herzegovina, or that the average production budget of one Bosnian film exceeds the entire annual amount of public funding allocated for film production. It could have been Cellular

But Mobitel, thankfully, is about much more because it strikes a sublime mix of playful, experimental, lyrical, and sardonic moments in what is ultimately an innovative film about everyday relationships with friends and family. His phone, a companion as much as any filmmaker’s camera, facilitates the development of characters that are not so much lovingly drawn as they are heard. His wife, children, parents, and friends emerge—unseen—through their phone conversations with Begović. One of his daughters, for example, is characterized by her incessant requests to borrow the family car. (So much so that that’s how she identified herself after a screening.) All the while his phone records the sights of his walking terrain.

The phone-as-camera method is unorthodox because it yields doubling results. While some scenes have ambient sound, many scenes are actually mash-ups of phone call audio melded with camera phone footage of Sarajevo. The phone captures images of the external world while recording sound from the discrete world defined by Begović’s phone calls, elevating the aesthetics of dialogue and sound to a prominent role—rare for a documentary.

This inventive layering of sight and sound is most impressive when Begović yokes together disparate images and voices, effectively creating artificial settings for and tinkering with the moods of his conversations. In one such sequence, Begović argues with a friend about some mundane detail while the film cuts back and forth between footage shot from moving vehicles on two separate roads: one during the day and one in the depth of a winter night, covered in snow. It takes a while to realize that each voice coordinates with one of the roads. As the argument escalates and each party spits shorter and shorter jabs over the phone, the shots switch back and forth quicker and quicker, until the cars seem to wind furiously down their respective streets.

Sometimes, the images do stand alone: a drunk stranger zigzags across a snowy street, waltzing without knowing it. The graffiti scrawled on Sarajevo’s walls waxes sarcastic and then philosophical, making declarations about Einstein, money, windows, God, and genitals (“I have a vagina! Not a pussy, not a cunt, a vagina!”). At other times, familiar cell phone sounds are rendered strange or poignant by the network of characters attached to them. The film crawls into its credits alongside the ringing of a phone that is eventually answered by an automated message: “The dialed subscriber is temporarily not available. Please try later.” This is followed by a memoriam to someone who might very well be the increasingly ill friend that Begović chats with throughout Mobitel. The automated voice comes across as haunting, ominous—not through some high-minded statement about technological barriers to social interaction, but by making manifest the mortal severing of human bonds. In the end, Mobitel isn’t about cell phones, it’s about the small daily devices we overlook but use to chart our lives nonetheless.

One Response to “Casting His Bell”