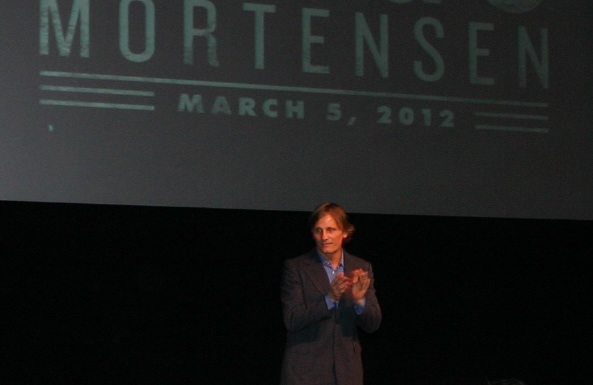 At least 45 different groups of film critics and professionals give out annual awards and it’s become part of the territory for heated debate to follow. Is the process fair? Do the right people win? Are awards just one more way to draw attention to celebrity culture?

Yet certain awards, like the Coolidge Award, a single honor bestowed each March by the nonprofit Coolidge Corner Theatre in Brookline, Massachusetts, brings a shade of depth and seriousness to this process, even when the recipient is one of the most known actors on Planet (and Middle) Earth. But then again, actor Viggo Mortenson is a fairly serious guy.

Like many independent theaters today, the Coolidge Corner Theatre has a rich history of struggling to maintain relevance through the ups and downs of public moviegoing. Built as a church in 1906, then transformed into an art deco movie palace in 1933, the Coolidge ran aground about four decades later and was “saved” by a grassroots effort in 1988. It’s one of the earliest participants in the Art House Convergence Film Theaters Conference, formed to share best practices among independent film theaters to keep them strong and thriving. (At this year’s conference, which takes place right before Sundance, the Coolidge announced a partnership with the Alfred P. Sloan Foundation to expand its Science on Screen program by offering grants to fund similar programs at up to 20 theaters.)

The Coolidge Award is another way the theatre has boosted its profile and set an example for other art house cinemas throughout the United States. Established in 2004 and given to a film artist “that advances the spirit of original and challenging cinema,” the Award typically includes a screening series of the awardees’ films, and various in-person dialogues with the winning artist. These events are also fundraising opportunities for the nonprofit foundation that runs the theatre.

The first Coolidge Award recipient was legendary Chinese director Zhang Yimou. Other recipients, honored for their distinct crafts, include actress Meryl Streep, English language director Jonathan Demme, editor Thelma Schoonmaker, producer Jeremy Thomas, animators the Quay Brothers, and cinematographer Vittorio Storaro. A multifarious group to say the least, but they all certainly fit the criteria of creating “consistently original and challenging work.” This year’s honoree, Mortensen, is no slouch either.

Best known as Aragorn from The Lord of the Rings trilogy, he is much more than the scruffy Ranger of the North. Actor, painter, photographer, poet, musician–Mortensen is interested in artistic expression in all its forms, but he feels stories are the most important. “Stories are how we deal with the puzzling fact that we’re here,” he said earlier this week at the ceremony held in the Coolidge’s 440-seat main theatre.

Moderated by Robin Young, host of WBUR’s Here and Now, the sold-out ceremony capped a retrospective of Mortensen’s films, including a marathon of the extended editions of all three Lord of the Rings films. Young’s two-hour live interview with Mortenson covered everything from moving to the United States from Argentina when he was 11 (his mother is from New York and his father is a Dane), to growing up in Northern New York (“don’t call it Upstate New York, it’s Northern New York,” he said), to the man who trained him in sword fighting for The Lord of the Rings (Bob Anderson, who recently passed away).

Mortensen responded to Young’s questions with a humble attitude toward his career and success; you would never know he has starred in three of the biggest motion pictures of all time. He acknowledged the opportunities that playing Aragorn brought to him and readily embraces The Lord of the Rings fan community. Point in fact: he led the crowd in singing the coronation song from The Return of the King–in Elvish of course, and yes, enough of the crowd knew the words.

Mortenson said that one of the most important results of being a part of The Lord of the Rings phenomenon is being able, now, “to work on thought-provoking and challenging projects. Films that challenge the audience and challenge the filmmakers.” It is this stance that led him to films like A History of Violence, The Road, Eastern Promises and most recently, A Dangerous Method, each project a completely different character and a completely different challenge.

Mortenson brought up the importance of the Coolidge and theaters like it several times. He vocalized how vital it is to support art house, community-based cinemas: to make sure audiences have a way to see smaller films made outside of Hollywood by talented filmmakers from all over the world, “surrounded by an audience of strangers.” And, in a gesture that underscored his seriousness, at the end of the night when he received the Award and the honorarium that comes with it, he immediately gave the check back to the Coolidge, saying something which I’m sure was very nice, but couldn’t be heard over all the applause.