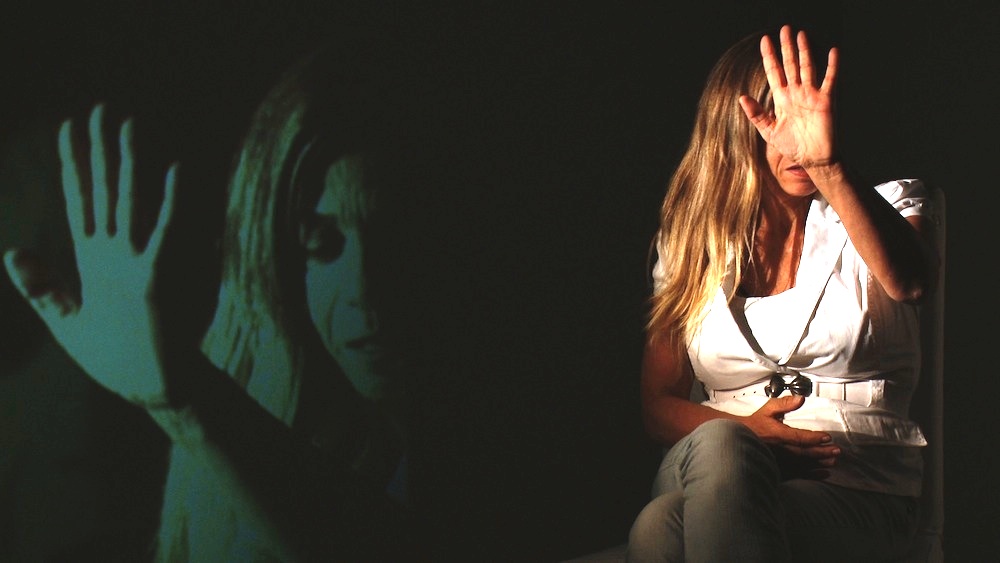 The many faces of Marie Castaldo appear in "The Mystery of Marie Jocelyne."

Now commonly known as Marie Castaldo, she is the convicted criminal, alleged con artist, and woman of many names at the center of the upcoming documentary, The Mystery of Marie Jocelyne.

Filmmakers Dan Nuxoll and Martha Shane came to the story after Nuxoll first encountered Castaldo in 2007. After founding the Queens International Film Festival (QUIFF), she called to rent equipment from Rooftop Films, where Nuxoll works as program director. Rooftop gave her a steep discount, but they never received any payment or deposit on her $2,650 bill. Castaldo couldn’t be reached, and accounts from others suggested that Rooftop wasn’t her only unpaid supplier. A year later, Nuxoll received an invitation to QUIFF 2008, and left a message for Castaldo about her outstanding debts. She contacted him, threatened to sue for slander and libel, and told him that if he showed up at the festival, there would be “men there to make him regret it.”

Nuxoll and others attempted to get the police involved, but he says they didn’t follow up on the allegations at that time. Independently, Nuxoll and Shane began piecing together Castaldo’s life with interviews and research, revealing a vast and colorful trail of alleged crimes, cons, and deceit. The story is remarkable not for egregious wrongdoing, but for Castaldo’s exceptionally chronic and compulsive pattern of behavior. The crimes and alleged cons span decades and cross continents.

In 1997, Castaldo bounced a $35,000 check for a lavish party in Los Angeles, and proceeded not only to skip mandatory court appearances, but to write another bad check soon after.

When asked why she worsened her situation with a repeat offense, Castaldo couldn’t explain her actions, but her answer reveals her taste for the dramatic: “When I wrote that check, I knew I was signing my own death warrant,” she said.

In 1999, Castaldo and her husband Richie founded the Narrowsburg International Independent Film Festival. (Richie’s attempt to make a mafia movie in Narrowsburg was documented in an episode of This American Life.) The couple was later taken to court by people who claimed they were never paid for their work on the festival; others sought redress for bounced checks. An especially aggravated group, nicknamed the “Gang of Fourteen,” signed complaints seeking a combined payment of $11,215.

After Nuxoll and others tried for years to hold Castaldo accountable for her debts, she was arrested on charges of dog hoarding in Upstate New York in 2010. Forty dogs were found in an empty storefront of a former feed store in Kingston, where police said the animals had no food or water and were covered in their own waste. Castaldo pleaded guilty to multiple counts of fraud and animal abuse, and was deported back to her native France.

Castaldo stories run the gamut “from bounced checks to small town Ponzi schemes to an attempt to sell Q-Tips off the back of a stolen pharmaceutical truck,” writes Nuxoll as part of the film’s funded Kickstarter campaign. “There is an elderly egg farmer who claimed he gave Marie and her husband his life savings to make a gangster movie, and there is a single mom who says Marie took her last dime.”

After years of amateur sleuthing, Nuxoll and Shane started thinking about a documentary. Both are involved in filmmaking, and have experience seeking out compelling projects. Nuxoll has worked as program director of Rooftop Films since 2002, and has served on juries for both SXSW and Slamdance. Shane has worked as producer, director, cinematographer, and editor on documentaries covering a range of subjects and styles. Both thought they’d uncovered a story that might be told in a short film or a series, but a few events pushed them to make a feature.

A few years ago Shane emailed an address that she believed belonged to one of Castaldo’s former business partners. She doubted the address would still be active, but received an eager response. “He called on Thanksgiving day,” Shane recalled. “He said, ‘I cannot believe you found me. I can’t believe [Castaldo] is still doing this. She ruined my life for a while.’ We talked for an hour and he was telling me all these crazy stories.” The man’s connection to Castaldo dated back 20 years, making Castaldo’s career longer and more pervasive than the filmmakers had imagined.

The project had breadth and drama, but the filmmakers couldn’t get Castaldo to talk with them on camera. When she finally agreed to an interview last October, their vision of a feature documentary began to coalesce. They could have made a movie by piecing together stories from her former friends and associates, Shane said, but Castaldo’s voice and perspective brought to the project a new level of interest and legitimacy.

Because of Castaldo’s deportation, the interview required travel to London, and the filmmakers interviewed her for 30 hours over the course of a week in a blacked out apartment. The conversations were funny, difficult, and sometimes drove Castaldo to tears and anger. “Every night when we finished the interview and said goodbye, I was totally afraid that she wasn’t going to come back the next day,” Shane said. “But she always came back. She was just determined.”

Along with telling her side of the story, which the filmmakers rate as a top priority, they also found themselves charmed by Castaldo in the same way so many others had described. “I felt like she sort of cast this spell on me,” said Shane. “I really believed what she was saying on some level, even though in retrospect I know she was telling us a number of lies.”

Some of Castaldo’s appeal, they say, is the age-old American attraction to a French accent, immaculate dress, and beauty. “I think she just has this allure,” Shane said. “Especially in the film world, where you think, ‘Oh she’s part of the French art cinema or something.'”

After a life’s worth of alleged deception, the filmmakers say that Castaldo does express some regret, but only over what she calls “misunderstandings” or instances of “trusting the wrong people.” “From her perspective, she really doesn’t think that any of the things she did are immoral or criminal,” said Nuxoll. When interviewed about the hoarding, Costaldo wept over her love for the dogs, explaining that she only pled guilty to some charges as a matter of expedience. “She can conceive of herself making mistakes or being overwhelmed,” said Shane, “but never of doing anything to actually hurt anybody.”

Interviewing someone of this disposition can be a challenge, and raised questions for the filmmakers about the nature of responsibility. “To what extent is someone morally accountable for her actions when it seems like she can’t control herself?” asked Shane. Castaldo’s penchant for fabrication and far-flung travels compelled the filmmakers to conduct rigorous research and interviews. “We are trying to get as many versions of every story as possible,” Shane explained over email. “Talking to as many people as possible, reading everything that’s been written about the case, and checking court records.”

The filmmakers hope that funding from a recent Kickstarter campaign will not only broaden the story geographically, but also deepen it psychologically. Even after their exhaustive interview with Castaldo, said Nuxoll, “I wouldn’t say that I know for sure what she was thinking in any of these circumstances. That’s one of the reasons why we want to get a better sense of some of the people that have been closest with her.”

Shane and Nuxoll are also interested in exploring the nature of truth and storytelling. “There’s never just one version of the truth,” Shane wrote. “Everyone has a slightly (and often extremely!) different version of each story, so rather than trying to convey that we as filmmakers have discovered the facts, we’re showing the audience as many versions as possible, and then letting them make up their own minds about where the truth lies.”

Production will continue at least through the fall, and Nuxoll and Shane aim to interview people throughout the country and ultimately travel to areas of France and Africa where Castaldo grew up and spent her early adulthood. “We want to retrace her footsteps, and I just kind of want to live her life,” said Shane. “Start at the beginning and go all the way through.”

This level of involvement with a subject can have unexpected consequences for filmmakers, and Shane and Nuxoll have found themselves affected by their work on the documentary. “More than anything else, it’s made me skeptical of my own intentions,” said Nuxoll. We’ve all been in situations, he said, “where we make the same mistakes, and justify it each step along the way… sometimes people’s justifications just don’t ring true from the outside, and it’s interesting to see, psychologically, what wheels are turning there.”

The goal for completion is late 2013. Viewers of the film may be skeptical of Castaldo at first, but could find themselves falling for a woman who has made her life’s work manufacturing belief—including her own. “However often she’s telling the truth or not telling the truth, I think she really believes it,” said Nuxoll. “If she doesn’t believe it the second she opens her mouth, she believes it a second later.”