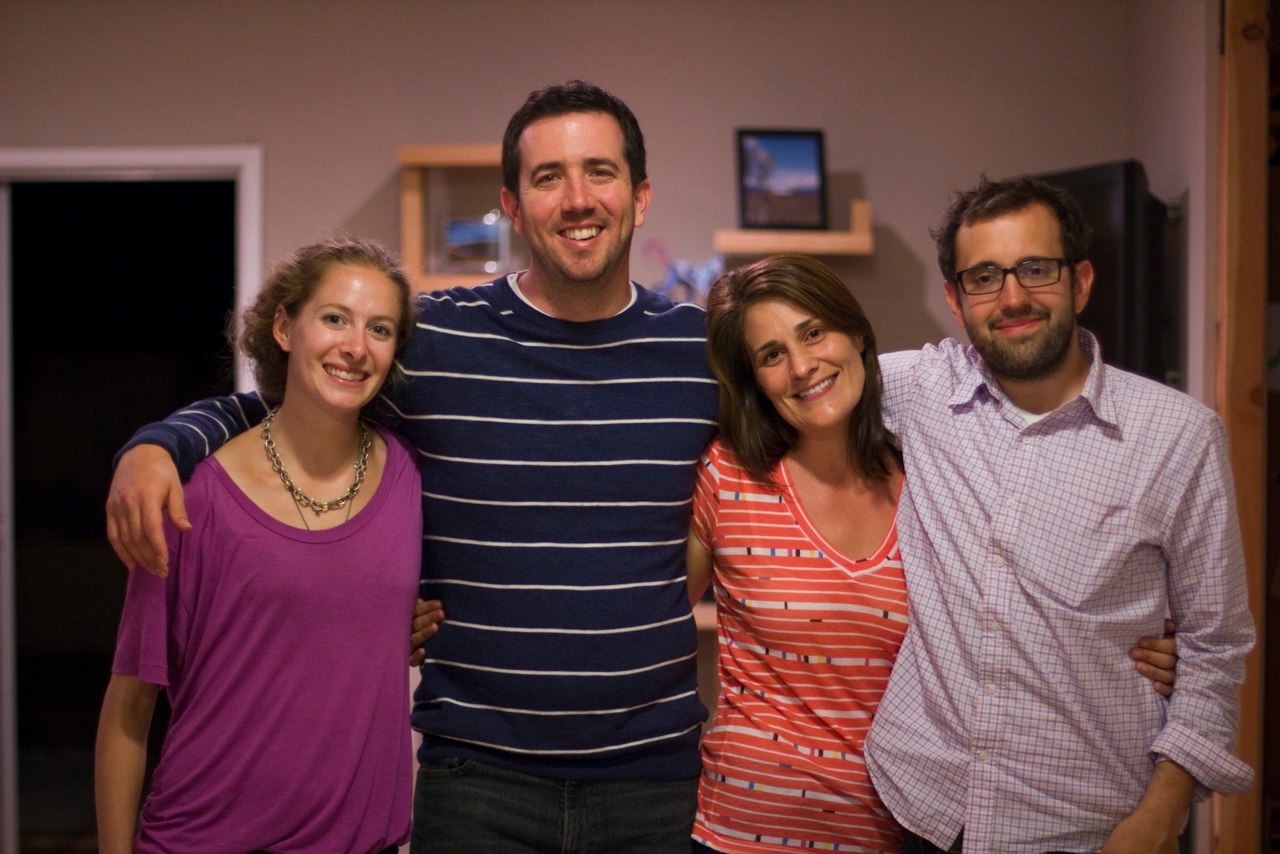 Writer/actor Kenny Stevenson and his wife, actress Dorien Davies, joined forces with producer Lisa Rudin and director Eric Kissack to make the award-winning indie comedy, Missed Connections. In it, Stevenson plays Neal, who answers “Missed Connections” ads on the Internet so he can “pick up chicks.” While pretending to be the guy the woman is desperately trying to meet, Neal arranges a fake date. The hapless woman shows up, but, of course, the fake date doesn’t. She sits there alone and vulnerable, Neal makes his move, and they hook up.

Missed Connections took home awards at the following film festivals: Cleveland International, Boston International, Indie Spirit, Traverse City, Cinetopia International, Woods Hole, and Big Bear Lake International. The film will have its international premiere at Raindance Film Festival in London with screenings on September 30th and October 2nd. Via email the foursome told The Independent’s Rebecca Reynolds how they pulled it off for $25,000, shooting on weekends, and using their connections.

Rebecca Reynolds: How did you come up with this idea?

Kenny Stevenson: People want to know if I actually tried to pick up women this way, but the answer is, no. I was into this idea of someone coming out of a break-up and how you think your life is going one way in a relationship. But then the rug gets pulled out from under you, and you have to keep moving your life forward. I just thought, ‘What if someone set up a fake Missed Connections ad, and then took advantage of the hope that the person had with their potential ‘found’ love?’

RR: Dorien, you and Kenny met at the Groundlings writing and performing comedy. How did he break the news to you that he wanted to do a film next?

Dorien Davies: Kenny and I were dancing at our wedding. It was a slow song toward the end of the night. I was exhausted. He looked at me deep in my eyes and said, ‘Now that we’ve finished planning this wedding, let’s make a movie.’ My first reaction was, ‘You’re crazy. I want a house.’

Kenny Stevenson: I was already working on the script before then, but after we got the wedding out of the way, it was time for the next big thing.

Dorien Davies: Kenny pitched two different script ideas when we were hanging out with my cousin, who’s a filmmaker. We were both really excited about the Missed Connections idea. It gave Kenny a big boost, and he started writing the script after that. The whole time we were on our honeymoon, whenever he had a free moment, Kenny brought out his laptop and worked on it. I have photos of him on the train in the north of England, just writing away.

Kenny Stevenson: I let [Dorien] read it when I finished the first draft, which was very rough. She let me know that my female characters needed some work.

Dorien Davies: I think some of my notes on his original draft were: ‘This is super sexist, babe, your women are totally unbelievable.’

Kenny Stevenson: Then she helped me mold them into the fun and amazing characters that they ended up being.

Dorien Davies: But we work really well together, and we can take each other’s notes without getting defensive. The only thing that mattered was that we make the best product we can.

RR: You decided early on to use your friends and family talent pool, regardless.

Kenny Stevenson: Absolutely. When I was writing the script, it was with certain people in mind for every character. The guys who play my two best friends, Barry and George—played by actors Shane Elliott and Alex Enriquez—are two of my best friends in real life. So, I intentionally wrote the film with our dynamic. Honestly, it made the writing process easier, because I know my friends and what their talents are and what they would be able to bring to the table.

RR: It’s one thing to write a film; another to get it made.

Lisa Rudin: I met Dorien through a former employer. We had always spoken over the phone and one day decided to get together for a drink. We hit it off! A drink turned into a few rounds. She mentioned that her husband was a writer and that they both performed improv. We made a plan to meet again, and he pitched me his script. I went home and read it right away and loved it.

Dorien Davies: Lisa had the budgeting experience, and she connected us to Eric [director Eric Kissack]. And all the pieces just fell into place.

Lisa Rudin: I remember asking Kenny, ‘So it’s great. I love it. What do you want to do with it? Want to get it in front of some agents?’ I was shocked and excited by his response. He said, ‘No, I don’t want them to change it.’ Okay, I said, ‘So what do you want to do with it?’ He said, ‘I want to make it ourselves.’ From there we did a table read, and the characters were really brought to life. I loved the project even more. After that I thought I’d ask Eric to read it. I told them about the short we had done (The Vanishing Point) and how talented he was.

Eric Kissack: I read Kenny’s script before I met him, and it was just so instantly apparent to me that not only was it funny, charming and well-written, but it also clearly needed to be made.

RR: As a first time feature director, were you concerned about the project being pre-cast?

Eric Kissack: Casting is so important, setting the tone of a movie, and the idea that I’d be relinquishing that control was terrifying. We did a table read of the script with almost the entire cast about a week after I met Kenny and Dorien. I remember feeling an intense sense of growing relief and, then, excitement. Everyone was terrific.

Dorien Davies: We raised almost all of our money on Kickstarter through the kindness of strangers and friends alike.

Lisa Rudin: We met our goal [$10,000], and it was a good thing. Our $10,000 budget was quickly eaten up by a large insurance package and crew pay. The camera package was donated to us by Panavision, which was a huge gift. Our sound equipment was donated as well—another huge gift. We had catering, craft service, hair and makeup, editing, final mix—all donated. Only about five people were paid on the project. We shot every weekend for two months and then shot more in October and January. It was tough in terms of continuity, but we did whatever was necessary to finish. We did a second Kickstarter campaign for $7,000 after finishing the first round of production.

RR: What were some of the trade-offs?

Eric Kissack: Well, I would have loved more [background] extras. We shot four scenes in bars, and I would have loved each of those bars to have been two to three times as crowded. If you look closely, you can actually see that we used the same three or four extras in different locations throughout those scenes. We would just put a jacket on or a hat. No one has noticed so far. Of course, now that the cat is out of the bag, I expect to see those “inconsistencies” start appearing on the “Goofs” section of our IMDB page. Have at it, Internet!

Eric Kissack: The main sacrifice we made was coverage. Every day, I would walk onto set with a list of 20-25 shots that I absolutely needed to get, and then the power would go out. Or a neighbor would start blasting loud polka music. Or the police would shut us down. Yes, all those things happened. And by the end of the day, I’d be lucky if I got 15 shots. That’s the biggest challenge of low-budget filmmaking—you don’t have the resources you need to move as fast as you want to, so everything takes longer than you think it will. And you wind up not getting every angle, every camera move, every take that you want. Luckily, because of my background as an editor, I knew how to cut shots off my list on the fly and pare things down to the real absolute essentials. I always say that editing is the best film school, and I honestly don’t know if I would have made it through that shoot if I couldn’t draw from my editing experience.

Lisa Rudin: When you have no money, you really have no guarantees in place. Your crew can always take a job that pays. Your location can always bail.

RR: What kept you up at night?

Lisa Rudin: The uncertainty of it all coming together, but we rolled with the punches. There were days our equipment didn’t show up. Our power went out. Someone’s hair caught fire. Okay, no. That was a different shoot. But, basically, everyone learned to do their job and then some.

RR: Finally, what exactly are “comedy chops,” and how do you get them?

Kenny Stevenson: Comedy chops, I believe, are a Vietnamese dish, like Pho?