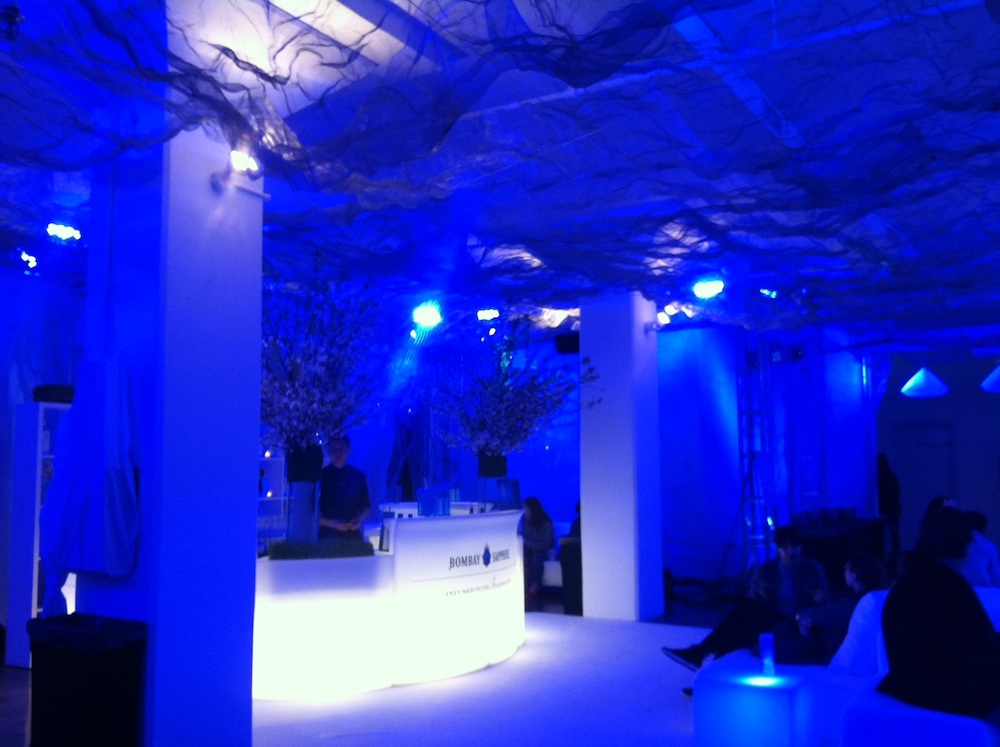 The Imagination Room at Storyscapes, part of TFI Interactive. Photo by Maddy Kadish.

TFI Interactive (TFII), an all day conference about technology and film, was held on April 20th in conjunction with the Tribeca Film Festival. Now in its second year, TFII explored interactive film, transmedia, and social media, among other topics, through brief and lively panels and presentations. Each speaker held the floor for about 10-15 minutes. Panels rarely exceeded 30 minutes. The space where it was held, the IAC building, is open and beautiful, as though the building itself embodies the spirit of participant film.

TFII grew from The New Media Fund, which supports filmmakers who are focused on social issues with funding, peer-to-peer networking, and distribution. “This field is so nascent and evolving. Being able to put money behind it is incredible,” said Ingrid Kopp, director of digital initiatives for Tribeca Film Institute.

TFII showcased a breadth of diverse projects. Themes included crowd-sourcing, multiple platforms, and, of course, plain old good storytelling. The terms for this work are often interchangeable, but much of the day’s conversation revolved around “transmedia,” the most commonly recognized stamp. “It can be overwhelming for filmmakers—and it’s changing all the time,” said Kopp. “But the terms matter less than the work. It really comes down to the work. These are new ways of storytelling. Technology is a tool, like a camera. The more you view it as a tool, the less scary it becomes.”

One can define transmedia as the unfolding of a story across multiple platforms: film (in the traditional sense), laptop, mobile, social media, and anything in between. Filmmakers do not necessarily have to use all, but each platform used must serve the audience by both standing alone and complementing each other. Transmedia exists in both documentary and narrative—the filmmaker (storyteller may be a more appropriate word at this point) creates a world, either real (as in docs) or imaginary (narratives). This world lives on multiple devices and/or or is developed through many sources. Other related terms, such as interactive film, participatory film, co-creation, second screen (using a mobile device while watching a film or TV), are often used to describe this field, but in some ways seem like subsets to transmedia.

Deanna Zandt, co-founder and partner of Lux Digital, said that “stories are the cornerstone of change in the world.” She spoke about using data from social media to tease out stories, emphasizing that filmmakers use tools to create emotional resonance, whatever those tools happen to be.

Kickstarter (now in its fourth year), typically thought of as a fundraising tool, also represented the participatory side. Stephanie Pereira, director of art programs at Kickstarter, spoke about its evolving role from fundraising to storytelling platform. Pereira described the value in learning from your backers.

Caspar Sonnen, curator at IDFA DocLab, predicted that “the audience will not become the auteur.” Participatory film or co-creation does not mean surrendering creative control, but using social media as a tool to support your vision, such as mining good stories. The learning and creativity is ongoing.

Localore, a new initiative from AIR Media Networks and production partner Zeega, presented their work with at public media stations where they use new modes of storytelling with the goal of moving public media beyond its core audiences. For example, Ed Zed Omega is a narrative transmedia project produced through Twin Cities Public TV. In it actors portray high school drop outs, in an effort to encourage students to stay in school. iSee Change (from KVNF, Paonia, CO) uses crowd-sourcing. Local listeners pose questions for scientists. If their question is selected listeners can also participate in developing the story—and become part of finding their answer.

New this year, Storyscapes was a juried selection of five transmedia projects. Storyscapes demonstrated what this disruption looks like in installation form. Five separate and unique immersive storytelling experiences, all with a collaborative aspect, filled the space dubbed “House of Imagination” on Varrick Street. Kopp selected each project and worked with each team to incorporate an installation aspect bringing each to life.

Sandy Storyline was one of the installations. It’s a participatory documentary about the impact of Hurricane Sandy that weaves together stories created by the filmmakers as well as ones sent in from community members. The doc played on a large screen supported on panels of wood surrounded by wooden seats, evoking a campfire storytelling setting.

Carolyn McDermott, a resident of Hoboken during Hurricane Sandy attended Storyscapes with the author. She expressed a need for a transmedia project like this as a method for community healing. “You are so focused on getting yourself and your home back together that you don’t see the big picture of what’s going on,” she said.

Kopp said that filmmakers do not need to become an expert in transmedia. “You need to know what the possibilities are for your creative vision and your audience. Our role [at Tribeca] is to help put those teams together.” Kopp emphasized that using technology strategically is important and may not serve every film. “It can be easy to get carried away with the hype. But films and books are not broken; we have analog living along digital. It works best as a natural incorporation in to your work, not something that’s forced. The aspect of craft is still important.”

If the Tribeca Film Festival’s roots are storytelling, as a healing from 911, then, TFI Interactive may be its wings, thinking ahead to the next generation of storytelling tools. Creativity can happen on any type of canvas.