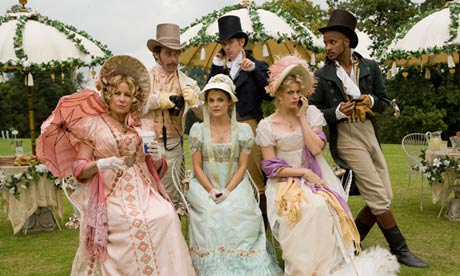 If only there was a place where romance always worked out. Could it be Austenland? (Photo courtesy Sony Pictures Classics)

What happens when critic and former academic Rebecca Steinitz, who once taught a course on Jane Austen’s novels and their film adaptations, takes her 12-year-old daughter Eva Steinitz, who has seen Bride and Prejudice and read the YA novel I Was Jane Austen’s Best Friend, to see the film adaptation of Shannon Hale’s novel Austenland, which happens to be directed by Napoleon Dynamite writer Jerusha Hess and produced by Twilight maven Stephenie Meyer? One might hope they enjoyed mother-daughter bonding over a madcap girl-friendly contemporary-Regency mash-up, but alas…well, they still enjoyed mother-daughter bonding. (Note: The reviews were written completely separately. All similarities of outlook and vocabulary are either coincidental or genetic.)

The Daughter’s Take on Austenland

Austenland is a bizarre, oddly hilarious, frustratingly unsatisfying movie, up until the last two minutes when, well, telling you what happened would be spoiling it.

Actually I take it back, Austenland is a bizarre, oddly hilarious, frustratingly unsatisfying movie, up through the last two minutes when, you know, stuff happens.

I began the movie strongly disliking the main character Jane, who just seemed pathetic, and even more disliking how pushed to sympathy I was for her. I hate it when movies, or books for that matter, tell me how to feel. Eventually I grew to like her, which made me hate it even more, because, oh no, the movie was telling me how to feel and I was feeling it. Of course my liking of Jane was mostly due to her out of the blue, but somehow still predictable, this-is-a-rom-com-and-I-need-to-take-charge-of-my-fate-like-the-independent-while-completely-codependent-on-a-man-kind-of-woman-I-am transformation into a bold, fearless person. And yet even that couldn’t make me truly like her because I knew it was happening for just that reason, to force me to like her.

Jennifer Coolidge, though, she was hilarious.

The Mother’s Take on Austenland

Seeing Austenland less than 24 hours after Miley Cyrus’s VMA twerkfest confirmed that we have long since reached the far end of the line for pop culture as self-conscious, pseudo-ironic, meta-cultural commentary. But at least Austenland was mildly entertaining.

Felicity’s Keri Russell, the iconic turn-of-the-millennium romantic TV heroine, stars as Jane (think: plain, Austen, Bennet, Eyre, Fairfax), an over-the-top Austen fan, as signified by her apartment full of Regency tchotchkes and cardboard cutout of Colin Firth. Unlucky in real-life love, Jane dreams of Darcy. Despite the skepticism of her pregnant best friend, she decides to spend all her money on a trip to Austenland, a British Regency immersion experience, where hired actors make desirous Janeites feel like they are actual Austen characters (in the book, the trip is a gift, which makes Jane that much less pathetic, but offers less opportunity for dramatic transformation).

Of course this is 2013, and we’ve read our Austen novels, seen our Austen movies, and read and seen our novels and movies that comment on Austen novels and movies, not to mention the entire history of romantic comedy (somewhat speciously) derived from Austen. We thus know from the beginning that the hunky coachman who winks at Jane when she arrives is meant for her, except that the movie also knows we know he’s meant for her, so…predictable meta-shenanigans ensue.

Unfortunately, Jane has purchased an Austenland Copper Package, which means she is dressed in drab and housed in the servant’s quarters, while the other guests revel in their Platinum Packages, which drape them in fine gowns and house them in suites garlanded with curtains, hangings, and doilies. This is where Eyre becomes the dominant Jane allusion, as our heroine obediently acquiesces to the Regency dominatrix moves of Austenland proprietor Mrs. Wattlesbrook. At least, she acquiesces until, in a transformation knowingly generated by the demands of movie cliché rather than any latent character traits, she goes open-eyed and spunky, seizes the gowns, and starts dominating the croquet field.

Austenland reels back and forth between real and pretend, adding intertextual references to underscore its winking self-awareness. There’s a semi-reenactment of the boat scene from the original meta-Austen romantic comedy, Bridget Jones’s Diary, and a Hobbit slur hurled against Jane’s love interest Martin, who is played by New Zealand actor Bret McKenzie, who played Lindir in The Hobbit, and, as Martin, admits that he is from New Zealand, so is really playing himself…the head starts to spin, though not to any real purpose.

So what’s to enjoy? Jennifer Coolidge is joyful comic relief, riffing madly on Stifler’s mom, as the wealthy American with a Platinum Package, an uncheckable libido, and a heart of gold. The scenes with the off-duty Regency actors offer stale but nevertheless funny off-duty actor humor. There are some other chuckles, including the obligatory irrelevant music video accompanying the credits.

Ultimately, though, Austenland does that incredibly irritating thing self-conscious, pseudo-ironic, meta-cultural movies tend to do: it debunks its own myths, then turns around and reenacts them. The fundamental premise of romantic comedy is the final clinch, and though Jane learns that life will never be an Austen novel, she still gets her clinch. At least it’s better than a giant foam finger on MTV.

Eva Steinitz is in seventh grade.

Rebecca Steinitz is a freelance writer and a literacy consultant in urban high schools.