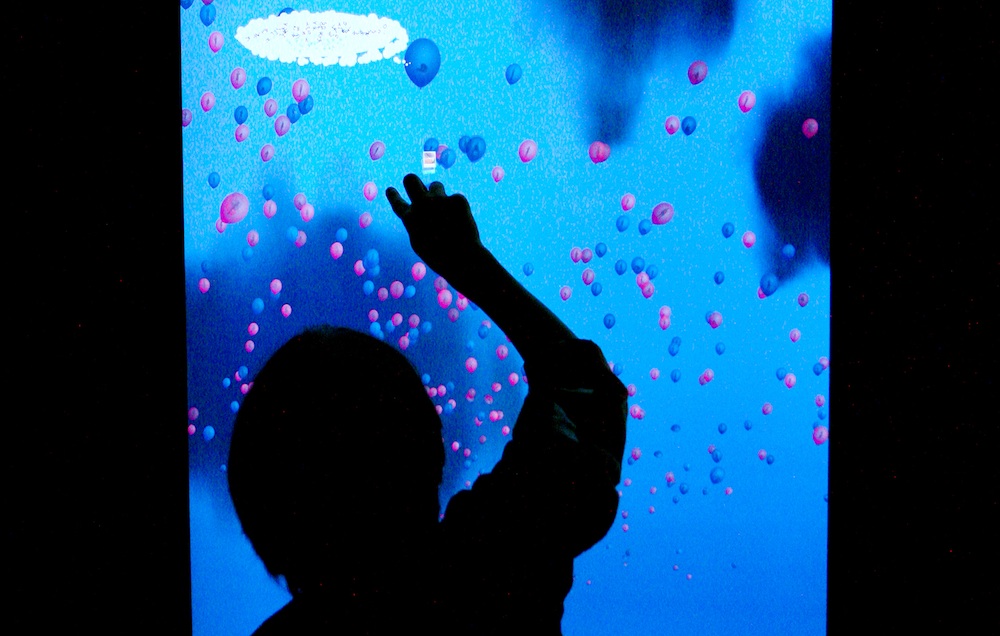 Pink and blue balloons populate the data in "I Want You to Want Me."

Park City, UTAH — For its 8th year in the 30-year-old Sundance Film Festival, the New Frontier section continued to unabashedly embrace change. As the industry adopts new digital formats, online distribution, and technology, New Frontier identifies and cultivates filmmakers working in these new areas and, also, teaches audiences how best to appreciate their emerging formats of expression. Not an easy thing to do. On the pragmatic side, Sundance relocated the installations much closer to Main Street, possibly to increase traffic through the exhibit space. On the curatorial side, the program of film, panels, and media installations once again expanded traditional storytelling modes.

The installations took form through data visualization, transmedia, virtual-reality, and interactive film. (Don’t think of this as a replacement to traditional film, but rather an addition, or many additions.) For an iconic version of data visualization, see I Want You to Want Me, from Jonathan Harris and Sep Kamvar, originally commissioned by New York’s Museum of Modern Art in 2008. Big data is a hot issue. As the Internet generates an inordinate amount of information and as data collection increases, visualization methods will be key to understanding what exactly we’re dealing with. That’s Harris and Kamvar’s daunting task.

In I Want You, a giant touch screen organizes and displays data from online dating profiles from a variety of dating websites around the world. The user interface and data display is simple, elegant, and engaging. Select your parameters (e.g. gender, age, who you are seeking) and pink or blue balloons come up; each balloon houses specific profile information. The balloons fly into different formations (a heart or DNA, for example), depending on the topic selected. Touch a balloon to reveal specific, and unnamed, phrases about who these people are and what they desire. The system searches dating websites for specific phrases, which it stores in a database. It updates with new live data every couple of hours.

Your inner critic may groan with images of pink and blue balloons and hearts. But the use of typical iconography helps to convey the complexity of the data and its collection. It is a well-designed and beautiful way to see (and touch) the sheer number of people hoping to find love and companionship online. The installation reveals both the diversity and commonalities of online daters, just as Harris and Kamvar’s prior work, We Feel Fine collected human feelings, as recorded in the world’s blogs.

My 52 Tuesdays, from filmmakers Sophie Hyde, Same Haren, and Dan Koerner, is a transmedia project and representative of the new ways a film can extend online and in-person interaction. It was designed to accompany 52 Tuesdays, a feature film (and winner) in the Sundance’s World Cinema Dramatic category. In My 52 Tuesdays, New Frontier audiences enter an interactive photo booth to answer a question posed. You can still download the My 52 Tuesdays app to do this on your own. The questions posed are personal and designed to help you “tune into” your life.

hitRECord on TV is a culmination of work from hitRECord, a unique, and ahead of its time, venture started by actor/director Joseph Gordon-Levitt. hitRECord is a crowdsouring collaborative production company, launched at New Frontier in 2010. Artists and filmmakers contribute scripts, photos, videos, and other media for others on the site to use as a base for their work. The site now has over 300,00 members who upload over 5,000 videos, songs, texts, and pieces of artwork each day. Beginning in 2014, hitRECord will air on Pivot.tv, a new TV network from Participant Media.

The Measure of all Things by documentarian Sam Green (Utopia in Four Movements, 2010 Sundance) was one of two works called “live documentary.” Green made the most of technical delays by chatting with the crowd who likely anticipated a much higher-tech performance than what they ultimately got: a glorified Power Point slideshow with Green as a whispy-voiced live narrator. (Later, Green acknowledged that he actually used Power Point.) Every once and a while he pointed at the screen with a red laser pen. YMusic, a chamber music group, performed a fantastic original score and stole this show.

The Girl from Nagasaki is a 3-D, contemporary version of the classic Puccini opera Madame Butterfly. The feature film, directed by acclaimed fashion photographer and artist Michel Comte, is highly stylized with spectacular visuals and costumes. Modern dance sequences and opera scenes, dripping with color (sometimes literally)—and emotion—help tell the story, as a sort of Shakespearian chorus. The story is as heart breaking and challenging to take in, even in 3-D, as the original. A 3-D short preceded it—130919: A Portrait of Marina Abramović—an ethereal 7-minute one-take of legendary performance artist, Marina Abramović and directed by Matthu Placek. The camera gently floats over her and around her, as Abramović is standing, quite exposed, in the building that will serve as the future site of the Marina Abramovic Institute. The institute plans to open in 2016 in Hudson, New York, with the goal of supporting long durational performance work—any work, such as music, opera, film, theater, performance art, science, etc…, where the performance exceeds six hours. (Something unlike this short.)

The experimental nature of New Frontier can be liberating. The long lines and wait times at the virtual-reality exhibits shows the strong interest in this type of media. New Frontier pushes our thinking as to what film and film culture is, can, and will be. You may ask yourself—are these digital and technological changes good for the industry? If you do, you are asking the wrong question. Whether good or bad—they exist and there will likely be more change in the future. The real question is how will filmmakers and the industry deal with this change? New Frontier shows us a way.