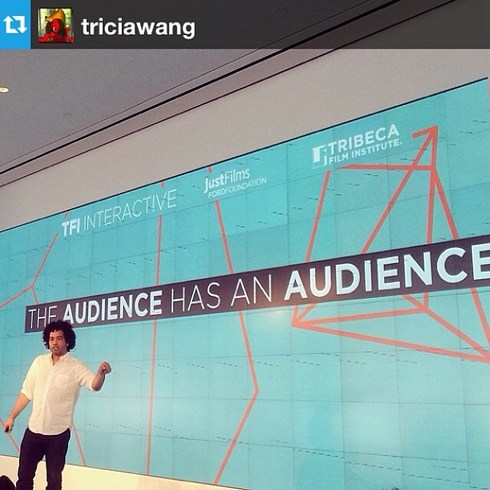 Part of the mission of Tribeca Film Festival is to “redefine the film festival experience.” Nothing does this more than the ever expanding Innovation Week at Tribeca. Innovation Week, the umbrella title that unites the various and diverse explorations of interaction, transmedia, and innovation, ran towards the end of the festival from April 21–26. It featured TFI Interactive, Tribeca Hacks, Storyscapes, Future Of Film panel discussions, the Disruptive Innovation Awards, and a Games For Change conference, new this year.

TFI Interactive (TFII), a daylong forum and its new Interactive Playground filled the beautiful and modern IAC building in NYC on April 26th. TFII turned the festival—and its audience—into a forward-thinking position about film and interactive storytelling. As the technology, and the culture around it, has evolved, so has TFII and the work that it showcases.

“Now that we are in our third year, we don’t have an identity crisis anymore,” said Ingrid Kopp, director of digital initiatives for Tribeca Film Institute, as she shuttled in between speakers, filmmakers, exhibits, and attendees. “We know who we are. We are breaking out of the echo chamber. We’re not just building this for us anymore,” she added.

Her point, in fact, was the subject of the opening keynote, entitled, “The Audience has an Audience.” Kenyatta Cheese, who studies the impact of media and technology on culture and is one of the pioneers of web-based TV, kicked off the event with a discussion of how the audience has changed. In spite of the new gadgets and tools at one’s disposal (and some on display at the Interactive Playground), the most profound shift for storytellers is not the technology, but the visibility of the audience. “Fans are stakeholders and they play a role in what we do,” he told the forum crowd.

TFII’s themes this year included cultural and audience shifts. TV audiences take an active role when they post on Twitter and Tumblr during the show and follow other fans. It is easy to see fans’ emotional reaction as they post Tweets, fan art based on the show, or create animated GIFs from their favorite scenes. Other fans will then re-blog these original comments and add their commentary. With fans following fans, this second layer of the audience develops.

Technology can now be more than simply a tool to tell your story. Audiences can access toolsets to create their own story platforms and create connections between people and communities. For example, filmmaker and TFI New Media Fund Grantee, Anjali Nayar, presented her work—This is My Backyard (TIMBY)—which uses geo-referenced media and crowd-sourcing to identify and share information about land and timber resources in West Africa. The app, TIMBY, is open source, secure, reporting software aimed at supporting a sustainable logging industry in Liberia. With Beta, a gaming platform, founder and creator Errol King demonstrated how users could not only play games, but design their own. It blurs the lines between player and creator.

Attendees at TFII’s forum could try out Beta in the Interactive Playground, new in 2014, a science-fair like atmosphere where you could “ooh” and “ah” and touch many of the projects described in the forum. Projection Piano, a project from producer Adrian Sas, demonstrated the three main principles that Tom Igoe, associate arts professor at the Tisch School of the Arts at NYU, discussed: interaction breaking the role of the traditional artist, design to prompt audience engagement, and thinking spatially. Inspired by the piano that you can jump on from the 1988 movie Big, Sas hacked an Xbox so that its video tracks your feet. As you move, a note plays and the colors dance across a screen. And as you move, you design your own experimental film, full of color, light, and sound. The piano image is projected on the floor to prompt you, but “it could be any image—flowers, a face, anything,” said Sas.

TFII also highlighted projects created at Tribeca Hacks Mobile, a two-day event within the festival. At Tribeca Hacks, filmmakers collaborated with technologists and designers to create prototypes of new mobile storytelling concepts. The 27 participants from around the world, each with varying levels of expertise, were divided into four teams. Each team included a filmmaker, developers, and designers. Team Echo won Best Overall Application and presented its winning work at TFII. Filmmaker Deniz Tortum, based on New York City and Istanbul, participated the team with Drew Schorno (graphic designer), and Femi King (developer experienced in healthcare related apps) and three others. The app uses Pebble Smartwatch technology to notify a user that they are near hidden digital art. The user then can view the hidden art with their mobile device.

Storyscapes, in its second year, is yet another aspect of Innovation Week and in way another form of interactive playground, showcasing film and art installations at the Bombay Sapphire House of Imagination. Each artist also presented at TFII. On a Human Scale: An Instrument of us by creator Matthew Matthew, invites users to play a 49-key harpsichord, controlling video of 49 different New Yorkers who are singing a single note. The video clips are organized and displayed in a diverse and quite beautiful video choir that users can play. Virtual reality was also in display in the form of Oculus Rift, a software whose quizzical purchase by Facebook made recent headlines, and Use of Force Protocol, which uses film, interactivity, and immersive journalism to put the user in the shoes of the heartbreaking and true story of migrant worker Anastasio Hernandez Rojas’ death at the US-Mexico border.

New this year was Games for Change, a fest within a fest, held April 22-24. Games for Change is the largest gaming event in New York City, started in 2004, to facilitate social impact games that serve as powerful tools for humanity and learning. You may wonder how a game can connect to storytelling. Errol King of Beta asked and answered that at TFII. “Where is the story in the game?” he asked the audience. His answer: “Everywhere.”

Tibeca Film Institute recognizes this new merging of film and interactivity and is using its festivals, programs, and funding to shape this active and growing field. The over abundance of innovative work, rising filmmakers, and options for attendees epitomizes New York City’s wealth of ideas and opportunities at it finest.