Josh and Benny Safdie, and actor Arielle Holmes, talk the morning after "Heaven Knows What" premieres at TIFF. 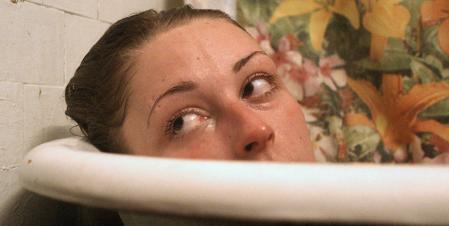 "Heaven Knows What" is based on Arielle Holmes' life while addicted to heroin.

In the Q&A after the North American premiere of Josh and Benny Safdie’s Heaven Knows What at the Toronto International Film Festival, star Arielle Holmes remarked on the surreal nature of her first film experience. “I find it insane that I just happened to meet Josh on the street one day on 47th in Manhattan and now I’m here,” she told the audience. A daring and accordingly divisive take on homelessness and heroin addiction on the streets of New York,Heaven Knows What takes the Safdies’ deepest dive yet into the blurry realm where reality and fiction merge. This is familiar territory for the brothers, whose semi-autobiographical Daddy Longlegs (2009) evoked stories about their father.

In the Safdies’ latest, Arielle plays a version of herself in a re-summoning of her life on the streets in New York, when she was equally addicted to heroin and her abusive boyfriend, Ilya (played by Caleb Landry Jones, one of few professional actors cast in the film). Josh first met Arielle while doing research for another film, and instantly knew he wanted to work with her. After learning more about her experiences, he realized her story deserved its own movie, and asked her to write it down. The resulting text provided the basis for the script, which includes multiple friends and acquaintances from Arielle’s life—all played by themselves in the film. Arielle’s memoir, Mad Love in New York City, will be published next year.

The morning after the screening, Josh, Benny, and Arielle basked in post-premiere glow in a sun-filled hotel restaurant. Asked about the name of the film, Josh explained, “It’s a cosmic title.” The cosmic ingredients and artistic influences that make up Heaven Knows What range from Batman to Shakespearean tragedy to sci-fi to Greek mythology to opera, with threads of nonfiction and social commentary woven throughout. “I look at these characters as kind of Greek gods that live in the Elysian Fields and they look for mortals to fuck with and figure out ways to excite their lives with little dramas,” Josh said. “The drug is the god’s drug… They are addicted to fucking with humans, and this concept of drama.”

In addition to toeing the line between fiction and nonfiction, the Safdies also like to explore larger issues by focusing on the people whose experiences are shaped by social issues. Their 2013 documentaryLenny Cooke followed a would-be NBA star who fell from grace before he achieved his dream to play professionally. Benny remarked on the similar approach to addressing context in Lenny Cooke andHeaven Knows What. “You could look at the Lenny Cooke film and there’s a lot of issues there, a lot of topical things that could be talked about. But by not focusing on the topical and focusing on the moment, I feel like you learn more about the issues, and you learn more about the people.”

“The microcosm is the macrocosm,” Josh added.

“Last night two people came up to me very angrily,” Benny continued. “They were saying ‘You can’t do this, you have to show where it all comes from, how it happens.’ And I’m like, ‘That’s not how it works.’ You don’t walk by someone on the street and know where they came from. You learn more when you have to piece it together.”

“People like to condescend when they watch things,” Josh commented.

Arielle also defended her directors’ choice to make a film first and foremost about people as people rather than as symbols. “That would be a different movie,” she contended. “I feel like a lot of other movies are about how it happened and the story of it. I like this so much better because it’s not. It’s not about where these people came from or why they do it. It’s just about the people, living their life.”

For many who experience homelessness in major American cities like New York, the post-apocalyptic future of sci-fi movies is not so different from waking reality. Militarized security forces police their movements, cold steel and colorless concrete surround them, sleeping can be dangerous, and minimal resources must be competed for. Arielle described how this lifestyle inspired her cinematic writing. “A lot of times just a day or this situation would feel like a movie, or like it should be a book.”

“She was typing so much, sending me so many pages,” Josh added. “Sometimes I couldn’t keep up. I can’t read as fast as she writes!”

A major film influence on Heaven Knows What is Streetwise, a 1984 documentary about homeless youth in Seattle. The subjects were magnetic. “I read an interview with [Streetwise director] Martin Bell recently and he said something like in order to make a movie you need a star. Whether it’s George Clooney or Gwyneth Paltrow or Arielle Holmes. Not everybody’s a star. You need stars. People who can wear anything and just look awesome. And Streetwise is filled with a lot of stars.”

“When I first watched it I was very weirded out by the vibe,” Benny recalled. It made me uncomfortable. It felt very close but at the same time very far.”

The same could be said about Heaven Knows What in a literal sense. The stunning cinematography by Sean Price Williams (Listen Up Philip) combines extreme long shots captured by “big, fat old lenses” with stealth zooms and confrontational close-ups. The score adds to the alien landscape. “We chose such synthy futuristic music because we wanted you to feel like, what planet are we even on?” Josh said.

In the Q&A, TIFF programmer Andréa Picard asked, “Did you have any discussions about boundaries?” The group onstage laughed in response. When I asked the next day how they navigated the tricky ethical terrain of making a movie with people who were actually experiencing homelessness, Josh shrugged. “Ethics, shmethics… They’re my friends. Before we started shooting, I knew everybody there. When I was like, ‘I want you to be in a movie,’ they were like, ‘Yeah right.’ Nobody believed me. So I was there first. Obviously I wasn’t living on the street but you know, I’m friends with the people in the movie and I really genuinely love everyone in the film. I can’t even imagine another perspective. I just feel like I made a movie with my friends in some weird way.”

Another standout performance delivered by a non-actor in the film comes from Buddy Duress, who plays Mike, Arielle’s companion in addiction. Buddy’s manic energy matches the whip fast speed of the film. He was unable to attend TIFF because he was arrested and jailed just before the festival. “He’s such a cinephile, he loves movies, so we always talk about movies,” Josh said. “He’s the first person I did a little filming with. He had this ability to kind of disappear into a moment. I was like ‘Is he as good as I think he is?’ And we would fuck with him, we would give him really weird lines to see if he could internalize them.”

The filmmakers and actress are still discovering moments of confusion between what was real and fake when the camera rolled, evidenced during Josh’s description of the moment that stands out as “the real testament to [Buddy’s] performance.” In the scene, Buddy carries on a long, fake phone conversation in what Josh dubbed “one of the greatest absurdist theater moments. That was like 20 minutes of him just cyclically talking on a phone with no one on it.”

Indeed, Arielle still has cause to care about the difference between the fictional world of the film and the real group of people she is still connected to in New York. “I’m kind of nervous actually,” she said, imagining their reactions to the film. “That’s the thing I’ve most been nervous about so far. Because it does expose a lot about the Upper West side and these people there. I’m really vulnerable, because they all know me, they know a lot of what’s happened, but they don’t get the full story. That’s the biggest reason. There’s another thing, it’s stupid, but I know I’m gonna get some shit for this… ‘Now I can’t spange here, everyone knows Upper West side are junkies.’ But I thought about it, and I’m like, my life is more important than your junk habit. Go find somewhere else.”

Arielle, who plans to continue acting, will see the first round of audience reactions among her friends and old acquaintances at the next festival screening in the New York Film Festival, September 26-October 12. For the Safdies, chance lies at the heart of the links between life, love, death, and addiction in their film. Benny mused, “Who knows what’s gonna happen… heaven knows what’s gonna happen.”