Director Hong Khaou shares the personal and professional journey behind his Sundance award-winning feature debut, available on DVD and VOD on September 29, 2014. 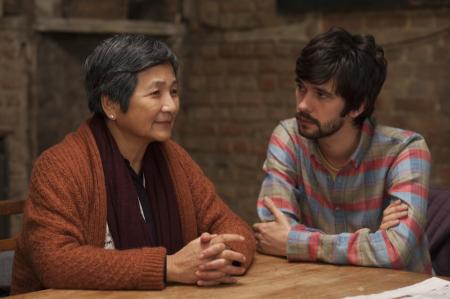 Lilting is the story of Junn (Pei-pei Cheng), a Cambodian-Chinese mother who, while grieving the sudden death of her son Kai, meets his British partner Richard (Ben Whishaw). While unable to communicate in the same language, a poignant connection is nonetheless built between them, based on the one thing they share: the person they both loved.

Between festival screenings and an ever-growing travel itinerary, Khaou indulged The Independent in a chat on the cusp of Lilting’s US release this September, where he revealed the deeply personal undertones of what eventually became a story with universally resonant themes.

Anisha Jhaveri: You’ve mentioned that Lilting is inspired by your own immigrant background. Can you tell us more about your childhood and how it informed the film’s story?

Hong Khaou: Lilting’s themes are very personal but the story itself is not autobiographical. My family is of Chinese descent but I was born in Cambodia, spent eight years in Vietnam, and have been in London for over 30 years now. My parents made a conscious decision to come here to give their children a better life. But where we were placed, there was no other family of our culture. As children, my brothers and sister and I were able to assimilate, but my parents’ lives were turned upside down. My dad had a job washing dishes in Chinatown and my mum, who was very independent in Vietnam, had no friends in London and never learned the language. We looked after her medication, went shopping with her, showed her how to get to places by bus and she would memorize the stops. I took that premise, of my mum not speaking English and of her children being her lifeline to the outside world, and imagined how she might cope if that lifeline was gone.

AJ: While not autobiographical, are there instances or scenes in the film that you lifted straight from personal experience?

Khaou: Not necessarily. Junn’s character is so unlike my mother. My mum is not as gregarious or talkative. Once you know what you want to say, you can then dramatize a fictitious scene to convey what you want. There’s a lot of process involved to turn something into a film. You have to map it and weave a structure around it.

AJ: Does that then make the process more technical than it does personal?

Khaou: I was very aware that the budget was small, and whatever I wrote had to be achievable within it. The only way to do that was to write a story that resonated with me. So it still does come from a place that’s deeply personal, especially that of grief. I lost my dad when I was 12 and the character in the film loses her son. So I had to expose myself in a certain way writing this.

AJ: Junn and Richard often talk to each other via a translator. There are obviously disadvantages to not having a common tongue, but as you went about making the film, did you discover that a language barrier can be an advantage?

Khaou: When one person can’t understand the other, it becomes fertile ground for the writer to play with. We used the translator character at very specific moments to either compound the situation in terms of words being lost in translation, or to protect somebody from the truth. But there were other moments I chose specifically not to include the translator. For instance, there’s a moment at the end where Junn and Richard have a big heart to heart. If I’d kept the translator for that, it would have disrupted the scene’s emotional momentum. Also, I felt I had permission to remove the translator there because what they say is so personal, and they hadn’t opened up to each other until that moment. I find that when we speak to somebody we know can’t understand us, we can say a lot more than we are usually capable of. So I thought that was a beautiful moment for me to just be creative with.

AJ: This film can strike a chord with audiences on many levels: being an immigrant, the parent/child generational gap, the LGBT angle, or simply the story of love and relationships. But who did you write the story for?

Khaou: I know all those themes very well, but for me, the foundation of writing this was always in language and communication, and in some ways, the desire to understand my mother a bit more. I can’t say that I specifically targeted any demographic, but I always knew it was going to be for an ‘art house audience.’ It was never going to be a commercial film in the multiplexes. It’s a meditative film that you have to spend a lot of time with, and a very performance-led drama. I remember being worried about that, so I spent a lot of time finding ways to lift the film by playing with camera movements and timelines. The cinematic aesthetic was very much considered to give the film another depth.

AJ: Have you been surprised by the reception?

Khaou: It’s amazing that people have come up and told me how much they like it. I’m still kind of neurotic about it. We really did seem to touch different people on different levels. They either connect to the honesty of the emotions or to the themes of the language, intercultural/generational gaps, and the grief.

AJ: In the context of an Asian culture, homosexuality is not often openly discussed or accepted. But it’s a big part of Lilting. How did your own cultural background play into your sensibilities of telling that part of the story?

Khaou: I knew that the industry is very scared of that concept. It was because of the low budget scheme, run by Film London, that I was able to do it without being so afraid. I’m gay. My mother knows I am and it’s not an issue for her. It may be an issue for others but if I started talking about that, Lilting would have become a different film. It’s a film about love: a mother’s love for her son, a lover’s love for his partner. I wanted to portray us in a very natural, matter-of-fact way; if we don’t do that more often, then how are we going to offer a different perspective of ourselves? I don’t mean to say this in a crusading way, but I’m political, I’m an artist and I’m gay. I should be able to write about gay characters.

AJ: Did you write the story with Ben (Whishaw) and Pei-pei (Cheng) in mind for the characters?

Khaou: No, but I’d seen their work for a long time. Pei-pei has been acting since she was 16 so I knew she’d be able to do it. She hardly has any dialogue; it’s all conveyed in her face and it’s absolutely beautiful. I was blown away by her on set; it seemed like second nature to her. Ben has all the dialogue and he makes each word feel so important. You hang on to every sentence and every punctuation. He’s always trying to find an authenticity to his performance. I thought the character of Richard needed something like that.

AJ: Did you try maintain a distance or silence between Pei-pei and Ben even off-camera to mirror their on-screen communication barriers?

Khaou: It was such a low-budget set, there wasn’t space for people to be in different rooms or places. But I was lucky that they gave me a lot of rehearsal time and in those moments we talked a lot. I thought I knew both characters so well but the actors still asked me questions that I had no answers to. At first it was quite scary but then it became quite liberating as together, we’d find answers.

AJ: What was the timeline, from start to finish, of making the film? Any unforeseen challenges?

Khaou: I wrote it in two months and when we got greenlit, I wrote a few more drafts. We shot in 17 days. It was so painful. So stressful! From shoot to the final delivery, it took about two years. That’s not to say we worked on it every day. On a low budget, when you have people who have full time jobs and are working on your film for very little or no money, you have to adhere to their schedule. When we shot Lilting, I left my own job so I could concentrate on it. Luckily it garnered a lot of interest at Sundance, so recently I got a US agent and am now having subsequent meetings. I’ve also started another script, which has been given a grant bySundance Lab. So I’ll go to Vietnam in September for two months to do another draft. It’s busy despite there being no income [laughs]. It’s just the early days but it’s tough. It’s a frightening place to be—but mostly, I just want people to connect to my work.