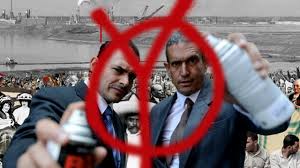 For this edition of Filmmakers and Their Global Lens, The Independent’s special contributor Dana Knight speaks with the comedy troupe, The Yes Men about filmmaking. Knight initially spoke with Mike Bonnano, Andy Bichlbaum and Laura Nix in Toronto in September.

Mike Bonnano: When we first started doing this, we imagined that we were just going to agree with people. We would infiltrate these business meetings and then we’d be saying “yes” until it amplified what they were saying and it became funny. It also means a “brown nose” or a person who would do anything to get ahead, though it seemed that we were living in a world where everybody was doing that, not looking at the long-term, just going for the short-term gains, so it’s just a way to sum up what we were doing when we’ve got started.

DK: When did you first become involved in political activism?

Andy Bichlbaum: For me it was 1996. Actually it was before that. In the 90s I was living in San Francisco and the Aids crisis was in full swing. I participated in Act-Up to some degree but mainly I was inspired by them, I really wanted to do something like that. They are such heroes, there was so much civil disobedience, they really ended up pressuring the government to come up with a treatment to fund research despite all the forces against that. At a certain point I had the opportunity to do something on my own and I did.

Laura Nix: For me it was late 80s early 90s. It was also Act-Up, being part of a group of people who were challenging the medical establishment, challenging the government and doing a kind of activism that was at that time really unusual and out of the box, it was really infectious and the people in the movement were really inspiring.

DK: Laura, were you with the Yes Men from the beginning? When did you join them?

Nix: I went to college with Mike and to graduate school, and I was around when they first started doing stunts. I pitched in on a few stunts that they were doing at the time. But I didn’t really consider myself a Yes Man, I was just helping out.

DK: But with time you became part of the group, you become a “Yes Woman”…

Nix: A “Yes Woman” or a “No Woman”, as the case may be. And this time around it was a different kind of collaboration because I did get involved as one of the directors of the film. And it was very important to have another person involved to direct the personal story, to have an outside perspective. Because I’ve known them for so long, and I know the story and what they’ve gone through in their collaboration. And I know what their personal lives are like, so I was able to include that as part of what it’s like to be an activist and how to stay together for 20 years.

DK: Judging by the reaction to your film, people seem amazed that you don’t get arrested. However, a stunt or a prank is not really fraud, so in this sense it’s not illegal. Can you shed some light on the confusion people make between the two?

Bichlbaum: Well, most of the laws that are about impersonation in America and in European countries are about trying to steal something. If you’re trying to get something from somebody else,  impersonating somebody is one way to do it. And that’s fraud. But what we’re doing is political speech: impersonating people in order to get a message out there. And that is protected free speech, at least in the US, it is protected by the First Amendment. And there’s laws about parody and satire, these are ways through which people have expressed themselves throughout history. So this is part of that. And if we weren’t believable in the first instance, if we weren’t giving a believable impersonation, then it wouldn’t work, the satire wouldn’t work. So we need to be able to do that, that’s why we’re really lucky to have the Electronic Frontier Foundation that stepped up and represented us pro bono, because you see in this movie that we get sued by the US Chamber of Commerce for impersonating them. And they say that it’s fraud. But the EFF said “We’ll defend you because it’s not fraud and it’s important to us that people express their rights and can fight and use political speech in ways that they want to”.

DK: So intention is key in an ambiguous case like this, and your intention was not to defraud anyone.

Bonnano: There’s the intention and there’s also what actually happens, which is that no one loses any money. And the Chamber of Commerce tried to argue that they had, but it’s an absurd argument they made.

DK: They do lose a bit of their dignity I think!

Bichlbaum: They did lose some dignity yes! But they shouldn’t have any dignity in the first place.

Bonnano: But we hope they lose money, our goal is to assure that they do lose money. Right now we’re in a situation where the oil companies and the Chamber of Commerce, which is basically a spokesperson for the oil companies, have to keep doing what they’re doing, which is extract the oil that they already own underground. But science tells us that if they do that we’re doomed. So they’re going to lose money, they’re going to lose a lot of money. We hope we’ll be a part of making them lose that money. But is that fraud? I think it’s just sanity. And they’re not going to do that voluntarily, so we hope that we’re part of a movement that is going to force them to do it against their will, because that’s the only way it’s going to happen. To give up the right to extract oil and coal …

DK: How do you organise these stunts? I imagine you have lots of ideas and you sit down and talk through many possibilities, how does it all come together?

Nix: From the outside it’s very interesting to watch how they prepare and I’m sorry we didn’t get to include more of that to see the brainstorming process because it’s a process where a lot of ideas are brought up. It’s kind of like “anything goes”, let’s throw it in and see if it sticks. And they cycle through many ideas. Some of them are great and some of them are really terrible and you hope that the final ones are some of the good ones.

DK: I want to hear a terrible idea!

Nix: Oh, I have a list of those! I think that posing as oil men in the Niger Delta was a terrible one.

The Yes Men: We were going to do that?

Nix: Yeah.And I also think that dressing up in Rambo outfits to go to Uganda, I’m glad also that one didn’t happen.

(The Yes Men are laughing)

Nix:I think that the giant inflatable ball that shot out poop at the audience as it was being floated around, I think it’s good that one was left behind.

The Yes Men: And I was so attached to that one […]. I wanted to make a big poop soup, that would make the person want to go to the bathroom very badly and poo all over the corporate office.

The Yes Men: We weren’t really going to cook a child on stage, we would have done it through magic! […] Ultimately, even the worst ideas can be very good. If they are done right.

DK: The film is truly memorable, I was at the public screening and I watched the reaction of the audience, people felt inspired and were also entertained. And I think it’s important to inject humour into a subject which could otherwise be very dry. I think you’ll attract a great deal of volunteers for your next project.

Bichlbaum: That’s good, because that’s what it’s about, inspiring people to act for themselves. So we hope that people want to, we hope everybody will do everything they can in the lead-up to the Climate Conference in December 2015. So that’s the focus of the next year and a half. For everybody to pile on and do everything they can and make a difference.

The Yes Men Are Revolting was shown at TIFF 2014.