In this series NYC film-journalist, Dana Knight, speaks with filmmakers about their work in the context of the wider world. 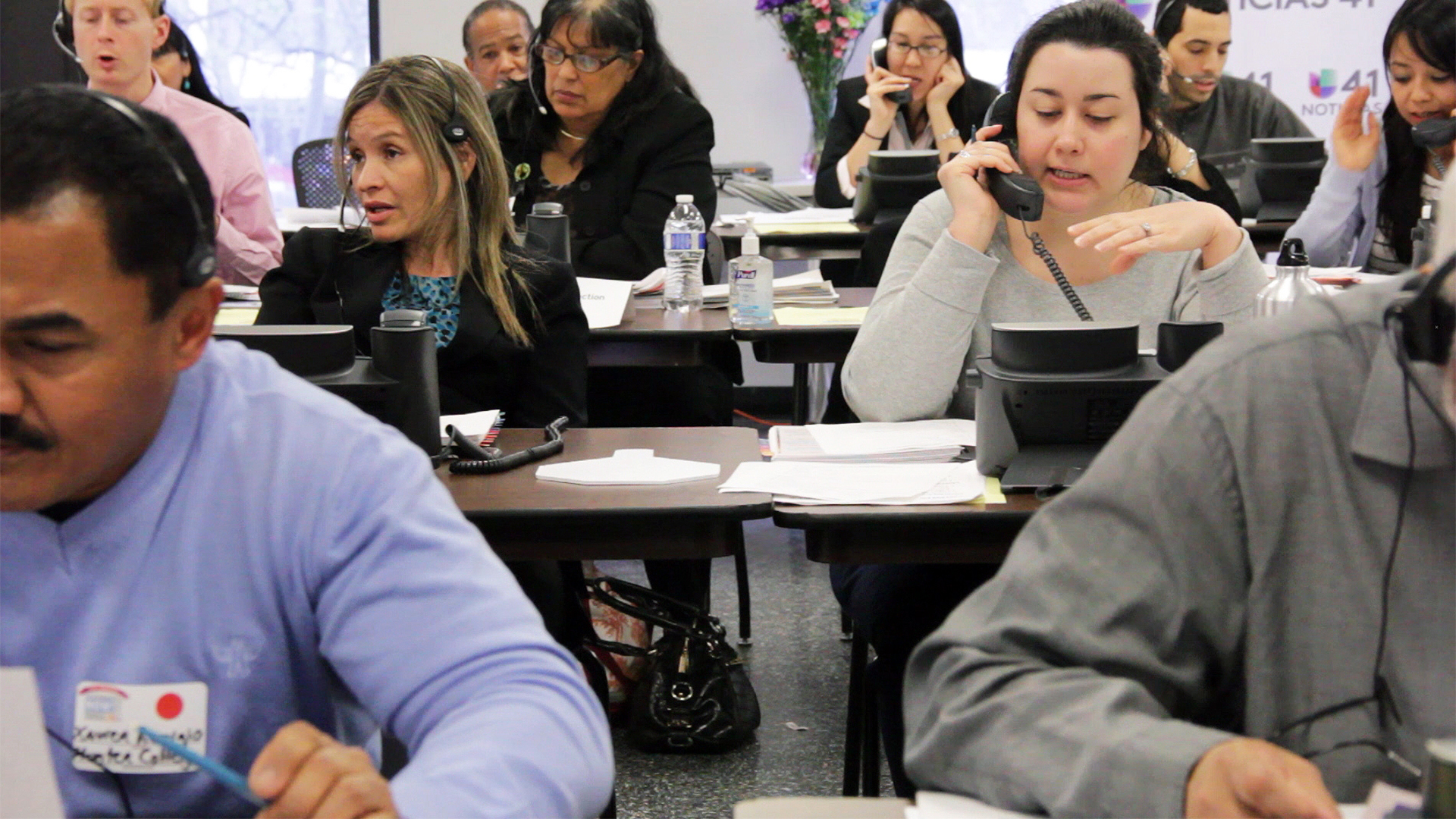 Operators at the Citizenship Now hotline. (Photo by Tony Shaff)

For this edition of Filmmakers and Their Global Lens,  The Independent’s special contributor Dana Knight spoke with Tony Shaff about his film Hotline at DOC NYC last month.

Dana Knight: Could you please introduce yourself and tell us what the film is about?

Tony Shaff: I’m a Brooklyn filmmaker and my film Hotline is a feature documentary about telephone hotlines. It’s about people who call and work on these anonymous and sometimes confidential hotlines. And it’s a look at how we’re communicating and the lost art of voice-to-voice communication in an age where we are a little bit digitally disconnected.

DK: What sparked your interest in this subject?

Shaff: I worked as a telephone psychic briefly. It was a really quick job, just to get my car up back and running. But it was a really intense job. I worked there for about six weeks. I got my car fixed and was able to move on from there. A few years later I moved to New York and I volunteered for a suicide-prevention hotline. And what I found was that the calls to these hotlines were so similar. It was a lot of the same people just looking for someone to talk to, some way to connect with another person. Or just feeling really isolated. And [they] didn’t have anyone else in their lives that they could talk to. So they were reaching out to a stranger and I just happened to be that stranger. So when I was working for these hotlines I wasn’t thinking that I was going to make a film, it wasn’t as if I was embedding myself to take these  stories and make them into something. But it did spark something in me and then over the next few years I started doing preproduction on the film and it’s been a really amazing journey, meeting these people and finding out the universal stories. And also the unique stories that happen when you’re working on a telephone hotline.

DK: What is your background, are you trained in psychology also? I imagine that in order to work for a suicide-prevention hotline you must have some professional training.

Shaff: I went to film school, I was a filmmaker. I have been making films since I was eight years old. But to be a telephone psychic there really weren’t many requirements! And I knew how to read Tarot cards. So I read Tarot cards. I never claimed to be psychic though. And I realized I didn’t really have to be psychic, people didn’t always want to know whether I was or not. I got a few questions like ‘Where are my keys?’ and I couldn’t tell them where their keys were. But people wanted to tell me about the very challenging emotional things that were happening in their lives. They were facing domestic abuse–all sorts of things. I don’t think psychics are trained to be like psychologists, it’s the latter who should be dealing with this. But as a hotline operator, I think it’s really just about being there and listening to what they have to say. And for the person to know that they are being heard, and not being judged, and not feeling like they are going to be revealed, their secrets can be kept between us. And sometimes that is more important maybe than the eight years of school to be a psychologist!

Shaff: When we met Jeff, he was almost at a breaking point. He’d been taking all of these calls and when we spoke to him, he didn’t know if he could do it anymore and we caught him at a very vulnerable moment where he just wanted to give so much and he couldn’t anymore. I think we hit a lot of these people at that moment. Whatever it might be, ‘I’m trying to decide if I’m going to be in a relationship with someone I met on a phone line’ or ‘Is the work that I’m doing hurting me too much? Am I going to have some vicarious trauma that I won’t be able to deal with later on?’ I think that the idea of the emotions and the emotional ride that the film takes you on… I was really trying to help the audience feel what it might be like to talk to someone on the phone and to hang up that call and pick up another call. And when you’re working on a hotline, every call is different, you never know what the next emotional moment that you’ll have is. And sometimes it can be really funny, sometimes you can laugh with someone. And the next moment you’re on the verge of tears. So I think it really is just human experience. We are emotional people and I think we may be moving away from it but we don’t have to, we can talk to one another and we can allow each other to feel.

DK: Could you talk about the other characters in the film? There are some memorable people in it.

Shaff: There are several main characters. But I don’t really like to call them “characters” or “subjects.” They are people who share their stories and one of the people in the film is Youree Dell Harris, who is Miss Cleo, a famous telephone psychic. She was very famous for her infomercials; “Call me now” was her big catchphrase. And we also interviewed Tonya Jone Miller who is a phone sex-operator in Portland.

DK: Or as she calls herself: an aural courtesan!

Shaff: Yes, she is an “aural courtesan!” But she also chose to use her real name and her real pictures, which is pretty unique in the phone sex-operator industry. Another of the people that we featured quite a bit is a man named Jaime who is a mobile crisis hotline worker. And he worked on a hotline for quite some time and he is the man the hotline calls to go out and meet with people face to face. He’s been doing it for seventeen years. You can tell he has the experience because he’s reached a point where he is very philosophical about his line of work.

DK: And how did you meet them?

Shaff: I don’t like to use the word “casting” but it’s a little bit like that. Casting the net out and trying to find people who represented each of the hotlines, the different “genres” of hotlines. Once into that world, finding people who had unique, interesting stories to tell. And stories that were really relevant right now, anything from calling a hotline and getting referrals to speaking with them personally. It was a really interesting process.

DK: Over what period have you been involved in this?

DK: How much footage did you accumulate and how difficult was the editing?

DK: You live in NYC, do you have the same perception of the city being a lonely place?

Shaff: Jeff, the lonely guy, speaks about that in the film, that it’s very difficult to meet people in NYC and big cities in general.That’s the thing, you can be surrounded by so many people and feel so completely alone. Even looking at Facebook and Twitter, you can have all of your friends you know, you can have 200 friends on Facebook, but there might not be that one person that you can reach out to and tell them how you’re actually feeling. No matter how many people you’re surrounded by, if you don’t have a way to talk to them, it can be very lonely and isolating.

DK: When is the film being released to the wider public?

Shaff: We are being released on iTunes and VOD. We had a really great festival run. At our very first festival, HotDocs in Toronto, there was something called Distribution Rendezvous where we had an opportunity to meet a lot of different distributors. One distributor that we really enjoyed has decided to take us on and they are releasing the film in North America for non-theatrical and VOD. So it’s very exciting. There’s another company that is taking care of our international sales. So it’s a bit of this business stuff that I’m having to become a little bit educated about, even though I am the director I also have a producer hat. But we’ve been very fortunate because there are so many independent films out there and in order to get recognised and get out into the world, it’s very exciting. Even being programmed at great festivals like DOC NYC is great. They are a new festival and they are relatively young but they are now the largest in the US and my film is in such great company here, screening alongside some of the great films of the year.

DK: Are you still going to film festivals after the US release?

Shaff: We haven’t done any European festivals or any Asian festivals so there is opportunity to take the film internationally but right now in North America we are done with festivals. We are on VOD and iTunes and hopefully other platforms in the near future.