The Independent’s special contributor, Dana Knight speaks with the director of Switzerland's submission for "Best Foreign Film" at the 2015 Academy Awards 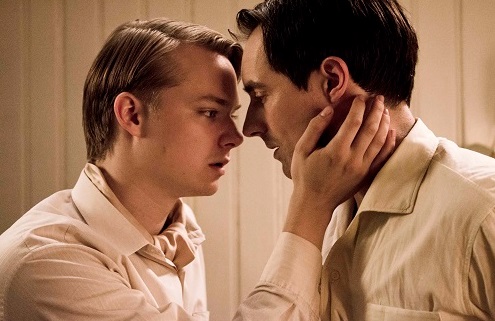 Still from Haupt's The Circle.

Dana Knight: Before seeing the film, the first thing that grabbed my attention was the film poster. It is slightly reminiscent of the poster for A New Kind of Love, the film starring Paul Newman and Joanne Woodward. This famous photograph also served as the poster for the 2013 Cannes Film Festival. Is this a coincidence or a way of presenting The Circle as first and foremost a love story and secondly as a human rights story?

Stefan Haupt: It is a coincidence, we did not know about that, otherwise we wouldn’t have dared to choose it. But your point is valid, for us, it was important to make a film for all kinds of people and emphasize the love story. And of course the human rights aspect of the story. It was a great thing to have the real characters, Robi and Ernst still alive, to have them in the film, and to also have this mixture of fictionalized scenes played by actors. And we were able at any point interfere with the real personalities telling their stories, giving it authenticity. It really happened like this.

DK: I know your debut as a filmmaker was in documentary, then you kept alternating between documentary and fiction. For this film, you chose to blend the two together, a very daring choice. Can you talk about what motivated that choice?

Haupt: In this case, it was the two producers that came to me and asked me if I would like to write and direct a film, The Circle. And at that point, it was clear to us that it would be a fiction film. And we wanted to do a co-production Switzerland-Germany. We found the money we needed in Switzerland but nothing at all in Germany, which made it very difficult. So at that point, we couldn’t make the film the way we wanted to. We had to rethink if we wanted to abandon the project or what our options were. Then someone came up with the idea of mixing documentary and fiction. I have to say I’ve seen that done quite often and it’s only in a very few cases that I really loved the result. It’s a difficult aesthetic choice and it’s really challenging to make something cohesive […]. But we decided to go ahead with it.  So we kept the fictionalized script that we had and we were thinking how we can replace certain scenes with the protagonists telling the story through Robi and Ernst. Before shooting the fiction parts, we edited the documentary parts. Then we went through the whole thing scene by scene, always thinking, reflecting what we can do to make it really glue together

DK: The formal complexity of blending documentary and fiction matches the complexity of the subject, adding layer after layer, with the interviews serving as a commentary on the story. It is interesting that it was a financial impediment that led to this concept.

Haupt: Yes I’m very happy now that it turned out like this. Sometimes you’re also lucky when you do things. For instance, Robi gave this performance in the theatre at the same time as we were developing the script for the fiction film. And I told the producers: “Let’s film this”. You never know, this might be good material. They said, “We don’t have the money”. I said, “Please, let’s do it”. I never thought that this could end up being the beginning and the end of the film. And once we had written the whole script, I went to the producers and said: “ I would like to do a long long interview with Robi and Ernst, to go through the whole script and each scene and ask them: is this really true? What kind of memories do you have when you read this scene?” Also having the bonus material for a DVD in mind. So we did that interview before we knew that we were going to make a docu-fiction. Then we made a transcript of it and when I started to put documentary and fiction parts together, I had the first text for the documentary film, which was very helpful.

DK:  Was the writing of the script a collaborative endeavor? Since this is Robi and Ernst’s personal story, I imagine they were involved in the writing process?

Robi Rapp: We got to read the treatments, quite many of them.

Ernst Ostertag: And we’d make comments, this is very good, this is not good. We would talk afterwards and change the script.

Haupt: I think it is important to say that the producers had meetings with Robi and Ernst very often, taking notes. Also, my older brother is gay and through him, I became more familiar with the whole story. So we wrote a first draft and handed it over to Robi and Ernst and asked them to give their comments on the story. But it was clear that it wasn’t them who could say “This can be in”, “This has to be out”. We were interested in their opinion but we agreed that not all the details had to be true, really true. The details had to give the impression that they could have been true.

DK:  Not necessarily “true” but “truthful”.

Haupt: Yes, truthful. They didn’t have to be historically true.

Ostertag: Generally speaking, there were very few things that we asked the screenwriters to alter. There were only very few instances where we insisted that “This has to be historically true”.

DK: Could you give an example of that?

Ostertag: In one of the scripts it was mentioned that the office of Der Kreis, where they also produced the magazine, was in the same building as the meetings and the festive acts. This was not the case and I thought it’s better to separate them.

DK: How long did the whole project last, from start to finish?

Haupt: It’s exactly seven years now that the two producers asked me to get involved. And at that point they’d been working on it for almost a year already. So it took us almost eight years but that happens quite often, simply because financing such a film is not easy. In this case it was a good thing for the project to mature.

DK: Where was the film shot? Did you shoot in the actual place where The Circle was located back in the 1950s?

Haupt: No, it’s not far away but it’s a different location. We shot in an old house in Zürich which has nothing to do with The Circle. We shot the festivities and the ball at the Neumarkt Theatre. And we also shot in a restaurant that has nice rooms so the atmosphere was very adequate and authentic but it was not the real place.

DK: What happened to the real place, when was it closed?

Ostertag: The Circle was closed in 1967. But the place still went on, it was used as a theatre after that and it’s still being used as a theatre. And the restaurant where they made the film has a stage, which was essential. And this stage looked very similar to what we remember the stage in Der Kreis to look like.

DK: How did the casting process go? The actors playing Robi and Ernst have almost a physical resemblance to Robi and Ernst’s younger selves, would you agree? Although I doubt this was your main criteria for choosing them.

Haupt: We were looking for two young men who could develop a good chemistry between each other. Because I had the feeling that between Robi and Ernst there’s a really special chemistry. And we wanted to find something similar. We first found the actor who plays Ernst and at the beginning, we had a German actor for Robi. This is when we were thinking it was going to be a co-production. So when we couldn’t have the co-production, we had to start again doing castings with other actors. We had to be sure that they would work well as a couple. It was clear to us that we shouldn’t pay attention to the physical aspect, so it is by chance that they resemble Robi and Ernst. Also, we didn’t pay attention whether they were gay or not. We really went for the quality of the actors and we’re happy that it worked out like this. Once we found Sven, it was totally clear to us that he was the one to play Robi.

Rapp: Yes, I think they were very well-chosen. They came to us, we talked, he asked me several things. And then we studied his part together, that helps a lot. […] For actors, it is quite difficult to play real people who are still alive. The end result is very good, I’m very happy with that.

DK: I was also wondering how it felt to have your story told for cinema? To revisit those difficult years?

DK: This film was called “the most endearing love story on the Swiss screen” and some film critics referred to it as a “romance”.  What are your thoughts on that?

Ostertag: I’m not sure we should use the word “romance”! I don’t know what the connotations of romance are here in America but I wouldn’t use this expression for our life. It wasn’t really a romance between us. We just got to know each other gradually. After we first met, there was no chance to try to see him again. But I was deeply touched by this young man and I was dreaming of him. And then we met again by chance. But it was never love at first sight. In a way yes but in a way no. What both of us, unbeknownst to each other, were seeking, was a deep connection to another person, a sort of partnership, based on love of course, but on deep love and not just being in love or falling in love. And I just knew that Robi was the person I wanted to get old with.