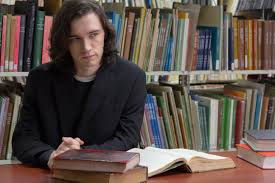 In November 2014, staff writer for The Independent, Dana Knight spoke with director/writer Hal Hartley.  Knight also sat down with Liam Aiken to look at the Hartley’s work from a new perspective.

Dana Knight (DK): This must be a very special project for you since your film debut was in Hal Hartley’s Henry Fool. What do you remember about that experience?

Liam Aiken: I was seven and I remember I did a drawing of him that says: “Hal is the director, he tells me what to do very nicely”. That’s mostly my impression of that first acting experience. A total playground. I remember trying to keep a straight face and not being very successful most of the time. Just being totally new to everything, fascinated with the boom mic and having no idea about anything but at the same time feeling kind of at home and excited.

DK: Did you take acting classes before this project?I know your mother played a huge role in your career.

Aiken: She did, yes you’re right. And no, I was very new, I didn’t take any instruction until a number of years later, I was about 9 or 10. But until then I was just going based on instinct and following directions and instructions on the set.

DK: What was it like working with Hal Hartley this time around?

Aiken: I think going back to those projects, each time I worked with Hal it felt like a bit of a touchstone. So it’s like going out and having all these experiences and formulating my own ideas  about things and then coming back to Hal’s set. Which is so direct. The way that his sets run, it’s like nothing else. You think, “Ok we’re going to do this. And get this shot and this shot and this shot”. And then he turns everything into one shot. And then you’re just amazed that you got everything and it’s all tightly and neatly packed into this one thing.

DK: You must probably rehearse a lot then.

Aiken: Somewhat. We certainly talk about what’s going on in the scene, we talk about what’s at play. But also the specific things: motions, characteristics, expressions. It seems obvious but it’s not all the time. You don’t always have someone tell you: “Pick this cup up when you say this line”.

DK: Also the type of acting required for this film is very specific, very stylised and quite different from other work you’ve been doing. It’s not naturalistic although it flows very naturally. 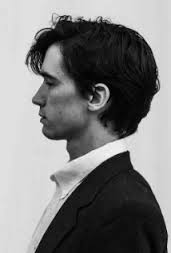 Aiken: You put that very well, I couldn’t agree more. The acting is very stylised, his language is so unique but at the same time we all feel we’re in the same world. That’s what helps it feel cohesive, that’s what helps it stay together. Because we’re all playing with the same thoughts. We’re getting shots in one take. And when you have one take you want to express everything, you want to get everything just right, you want to get all the parts moving. We come into it full-force and go from there. Usually Hal says something like “Ok, take it down a notch” or “Pick up the beat”. Little things that help us tie everything together, the sense that it’s one moving picture, flowing naturally. Like you would in a play, what you’re seeing on stage is all part of the scene.

DK: How did you conceive of your character? Ned is a very complex character, a religious son who wants to kill his father for destroying his mother’s life.

Aiken: It was Hal’s idea to go that route. When I first started talking with Hal and he told me that Ned was going to be a devout Christian, I was shocked. It seemed not only the furthest thing from what I would have imagined but also, considering the themes of the first couple of films, that religion didn’t play into any of it. So it seemed like such a leap.

DK: Did you find your character a bit of a paradox? Did you talk to Hal about this?

Aiken: Sure. I think I had my own thoughts and concerns. The first thing I imagined was someone who espoused his beliefs,  who was very religious and strict and was giving everyone guidelines. But that is not everything that Ned is. And once I understood that he was very far removed from that, it made the most sense, it was the perfect choice. It gives Ned all the impetus, all the motivation that he needs to go out and commit such an act, of killing his father. It is murder but in this eyes it is a response to something that his father had done. So morally it is not so much a crime. He needed that fortitude, that nourishing environment of a religious family in order to find his centre and go out into the world and go on this adventure, and follow his beliefs. So understanding all these dynamics, it made most sense, it was a great direction I think.

DK: What was your most difficult project so far in your acting career?

Aiken: Projects have their own difficulties. Sometimes it’s time, I made a film in 12 days a couple of years ago, that was very difficult from the perspective of not getting too much sleep, I was just grinding and grinding. Other films are more difficult in an enjoyable sense. So it’s difficult because you believe there’s a right answer and it’s hard to look and to find that answer but it’s also an incredibly rewarding experience. So each project has its own difficulties and challenges.

DK: What is the greatest acting lesson you learned from all your film projects?

Aiken: Trust your instincts. If you’re getting confused about something, try to simplify it. Usually we’re all kind of dealing with a couple of things at once, we all have moving parts, we all have wheels turning in our heads. And not to forget what that’s like.  We all have thoughts that we want to get out there and we all need to take our own time to do it. So take your time and follow your instincts.