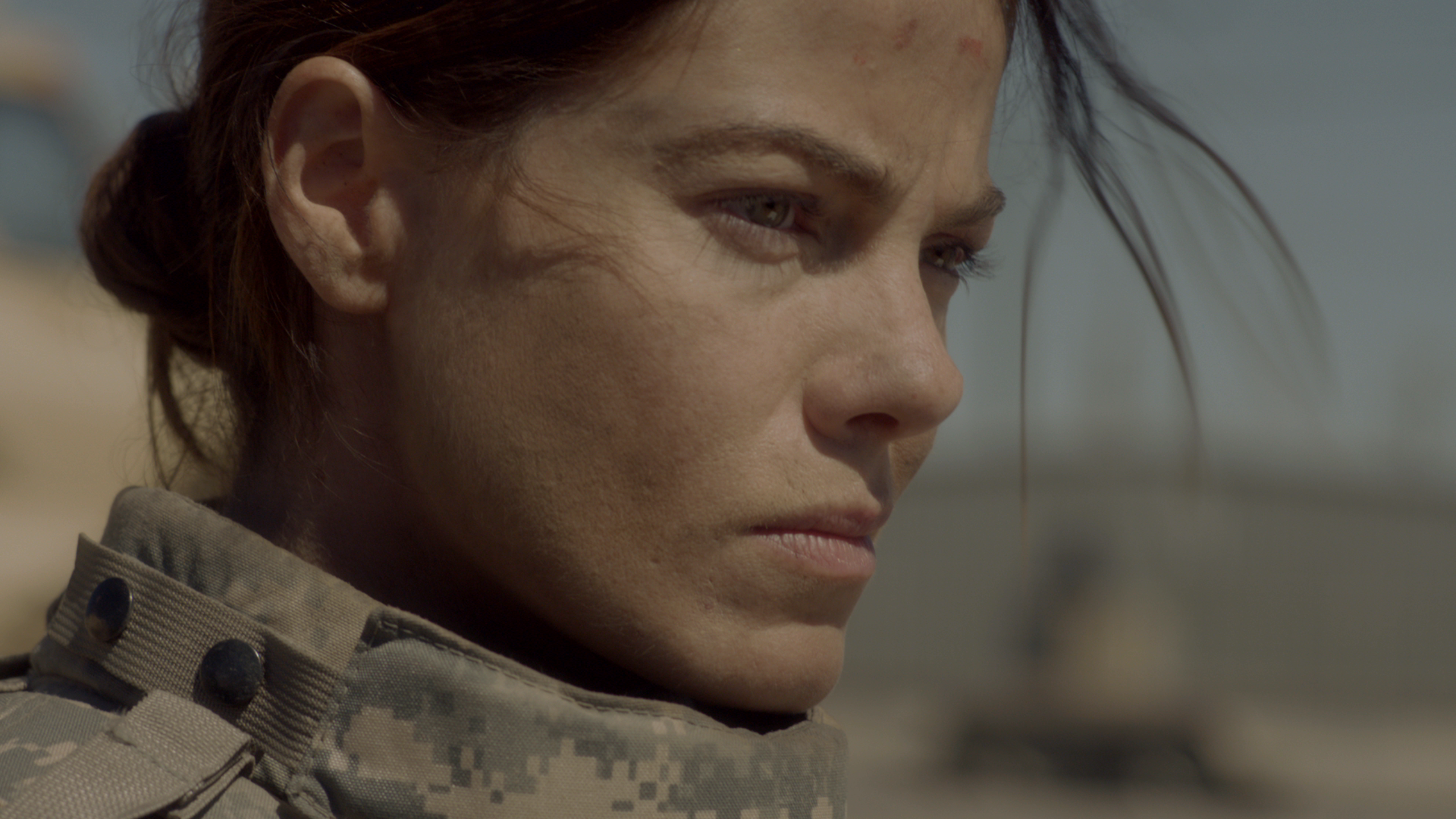 Looking only at her resume, it’s easy to assume that Claudia Myers is a military filmmaker. One of her first jobs in film was working in development for The Thin Red Line. Following the graduate film program at Columbia, she worked on an interactive training film for the Army, then produced and directed documentaries about the evolution of women’s roles in the military and soldiers who were severely injured in Iraq. Her latest fiction feature, Fort Bliss, centers on an army medic. But Myers, an associate professor at the School of Communication at American University in the Film & Media Arts Division, says that she is drawn more toward thematic elements than particular genres. “The two things that interest me most are the concept of resilience and how we construct our identity,” says Myers. “From where do we derive a sense of identity? What makes us who we are? Can we be seen as more than one thing?” 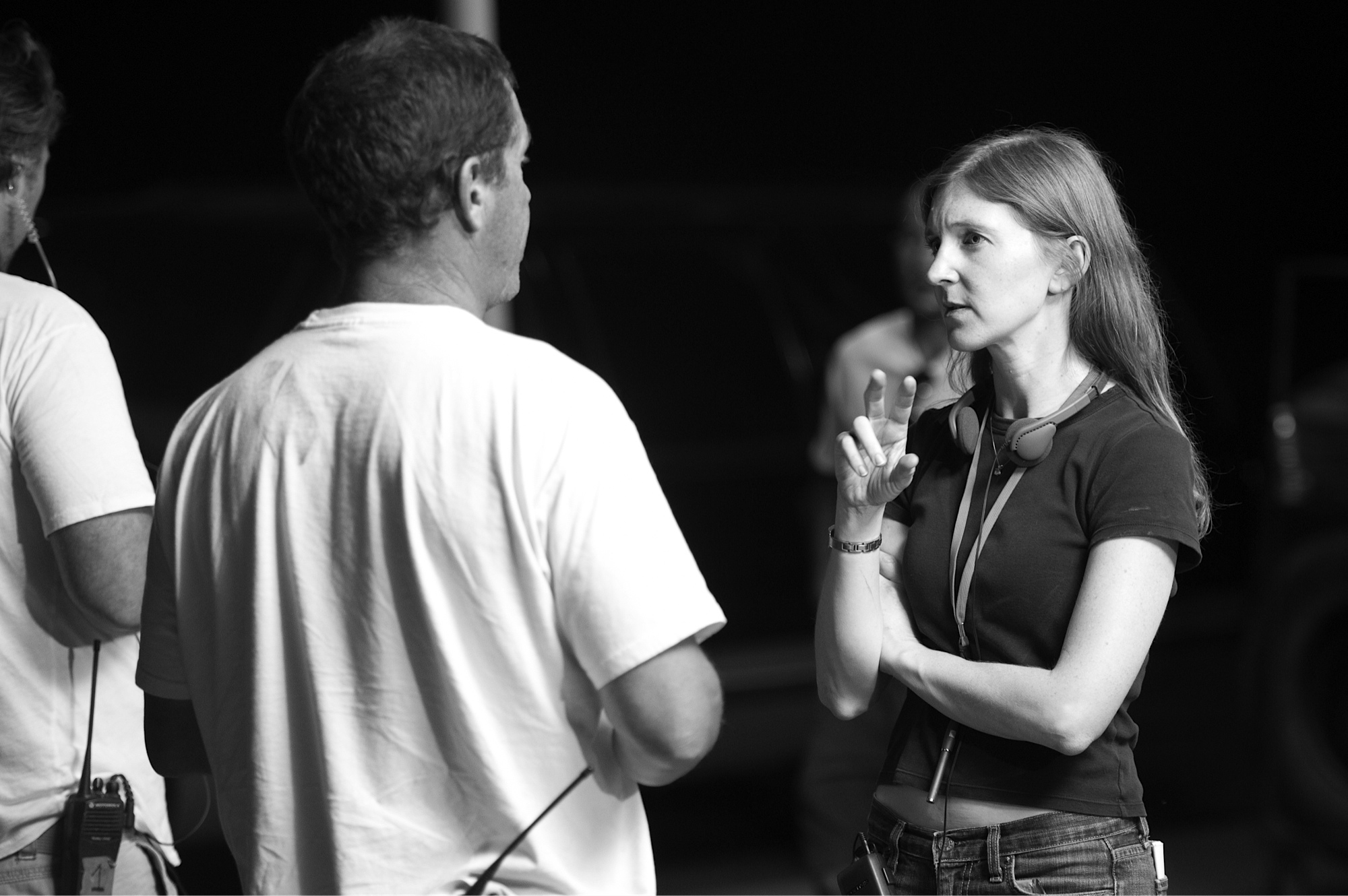 Director Claudia Myers on the set of Fort Bliss.

These questions drive Fort Bliss, a film about a single mother, Maggie (Michelle Monaghan), trying to reconnect with her son Paul (Oakes Fegley) after her 15-month deployment in Iraq. The character embodies Myers’ questions about the complexity of identity. As she explains, “I really wanted to tell what, for me, is the ultimate working mother story. How do you balance these two things that seem to be in opposition? Can you be good at both of these things or do you have to choose? Are you viewed differently because you’re a woman? You know, a man is a hero for going off and fighting for his country, and the woman who does the same is essentially construed as a bad mother.”

Part of creating a rich and believable working mother depended on finding the right military job for Maggie. While working on her documentary about wounded soldiers, Myers interviewed a medic about her work and was struck by “the sense of satisfaction, the sense that she was doing something good, and that sense of commitment.” But being a good medic also means acting swiftly and without much emotion. As Myers explains, “even seconds spent trying to console someone or starting to feel upset for how upset they are, that can cost someone their life. I was very struck by the way that medics spoke about what they did in a clinical way because it’s a necessity.”

This kind of necessary detachment can be an obstacle as a nurturing parent, and Myers found this discrepancy compelling. “I wanted that to be almost like an Achilles heel when she returns to the civilian world, her ability to detach emotionally,” says Myers. “The thing that made her excellent at her job was also the thing that became a hindrance to her when she was trying to work with her own child.”

For Myers, complexity is not an end in itself; it also bolsters the audience’s connection to characters. “I don’t think we’re drawn to – or at least I’m not really drawn to – idealized characters,” Myers says, “and I think we relate in some ways better to characters that are flawed, because most of us are.” In addition, after spending four years making films for and about the military, Myers says that she “wanted to honor the complexity of both the situation that I was portraying and the people that I had encountered. I didn’t admire them any less because they were struggling – if anything it made me feel more connected to them.”

Part of what makes Fort Bliss so nuanced is its refusal to shy away from the uglier sides of parenting. In one scene, after Maggie’s son Paul refuses to eat his dinner because it’s not cooked the way he likes it, Maggie stands, roaring over Paul, with partially chewed pieces of chicken and rice flying out of her mouth. It’s startling and demonstrates Myers’s attention to the details of family life and her refusal to sugarcoat. As Myers describes it, Maggie “becomes more sergeant than mom in that moment. And I think a lot of people kind of connect to that. Parents get frustrated. We don’t like to show these things, but how many of have lost our patience with our children? I think most of us have at some point, if not on a daily or weekly basis.”

“There was never a sense,” Myers continues, “that we had to apologize for Maggie’s behavior or tone it down. [That moment is] not about cruelty, it’s about efficiency… She had a very specific way of dealing with stress psychologically, and she’s a woman of action. That’s what you’re taught. That’s what she needs to do to function in her world.”

The story is also complicated by Maggie’s relationship with her ex-husband, Richard (Ron Livingston). Their dynamic is neither overly antagonistic nor cordial; in other words, they seem like a real divorced couple. Like Maggie, Richard isn’t perfect – he cheated on Maggie before their divorce and frequently seems insensitive to her experience in deployment – but Myers’s script ensures that we don’t villainize him, in part because he represents an important, but often overlooked, element of the military experience. “[Richard] gives us a window, I felt, into the spouse’s story,” says Myers. “There’s a whole other side to deployment which is the person you leave at home – the stress, the frustration, the isolation. They, too, feel like they’re not understood. And they don’t feel like they can complain because they’re not being shot at.”

This is typical of Myers. She seems especially interested in spotlighting those experiences that don’t get attention elsewhere. The military is fertile ground for such stories. As Myers points out, less than one percent of the American population is in the military, which creates what’s sometimes called “the civilian-military divide.” There’s a lack of understanding, says Myers, “and I felt it personally. I’d never thought about single parents in the military. I’d never thought about what that must be like for the family, for the child, for someone who grows up and sees their parent over Skype once a month for over a year. So I think these stories are really important, and that gave the film a sense of urgency. Hopefully, people come away with a greater understanding or at least appreciation of what some of these people go through.”

As she worked to authentically represent the military experience, Myers at times enlisted the help of the military community itself. One of the most logistically challenging scenes came at the beginning of the movie during Maggie’s homecoming. Myers couldn’t afford the number of extras she envisioned for a scene that needed to be brimming with energy and emotion. Rather than use only the 10 extras they could afford, Myers put out a call in the local El Paso and military communities asking for volunteers to be part of the scene. One hundred families showed up. “So many of these families had been part of homecomings before, and so it had an authenticity that we were all very proud of, and it was very moving. Michelle [Monaghan] too, I think, was really affected by that scene because it felt so real. And the art department brilliantly brought materials for signs and let everybody make their own. It was that level of authenticity we were looking for and hoping for.”

Authenticity was essential to Myers in part because she views the military as a deeply important audience. Her work has paid off. After the film’s premiere in Los Angeles, sponsored by Veterans in Film and Television and the Easter Seals, a veteran approached Myers and said, “Every single thing that happened to Maggie happened to me.” As Myers said, “That’s just extraordinarily rewarding. It’s very satisfying to feel that you’ve struck a chord with the people who really know what you’re talking about.”

Myers says that she also feels that the film is valuable to civilian viewers. “The other reaction that’s equally satisfying in a different way is people coming to us afterwards and saying, ‘We had no idea,’ or ‘I completely related to Maggie and I’ve never known anyone in the military.’ A lot of professional women will be really surprised by the way they feel about the story, I think, because of that push and pull and double standard that they feel. That’s also incredibly rewarding because the story can transcend the setting that it’s in.”

Myers’s next film, Shadow Girl, is, as she described it in an e-mail, a “magic realist tale about young woman who has faded to the point of becoming invisible and must find her way back with the help of the one man who can see her.” Reading this, I couldn’t help but think of Myers as the man she described. Myers, too, sees the invisible and aims to bring it back – to keep it from fading from view.

To read about how producer and cinematographer, Adam Silver, collaborated with Myers on Fort Bliss, check out our extra article.