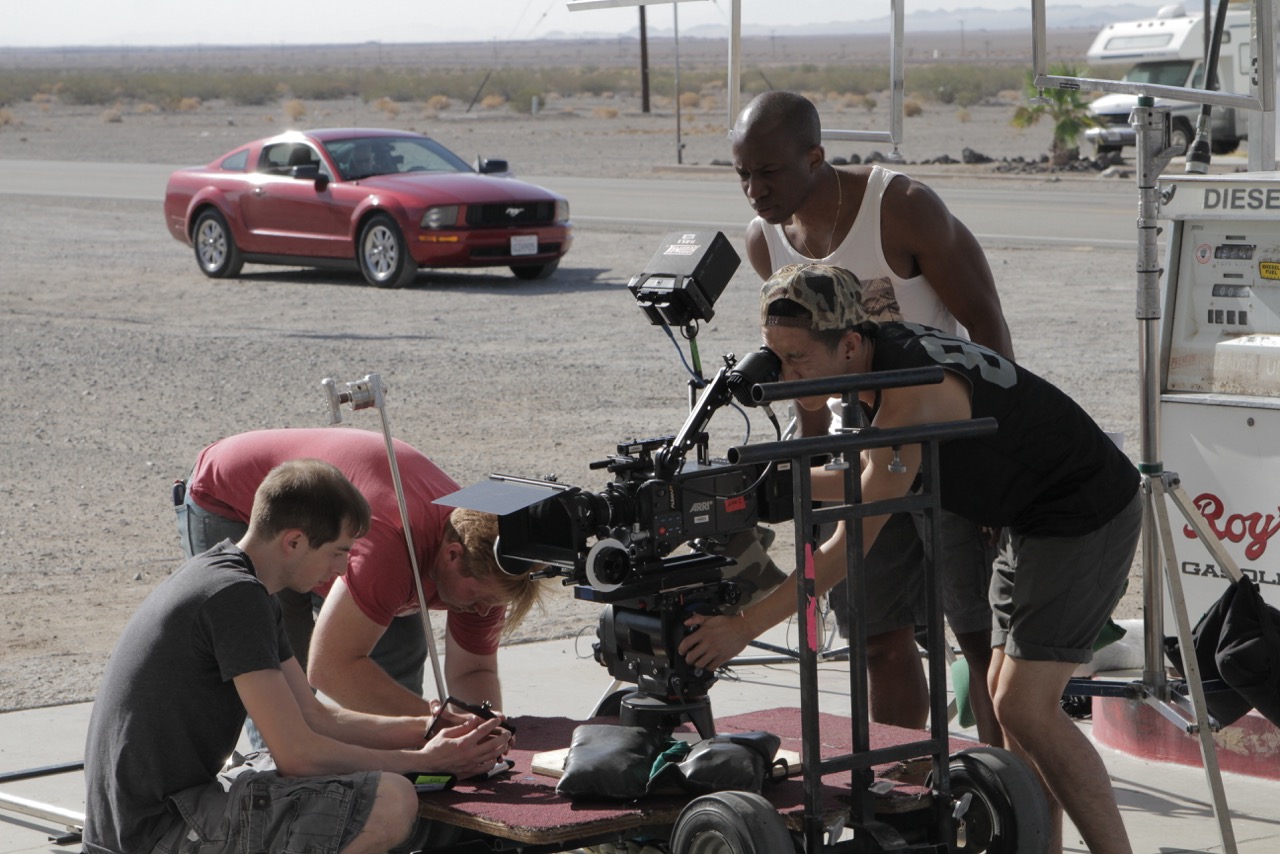 Writer/director Thomas Ikimi on the set of his short, Nostradamus.

The Independent’s Mike Sullivan talks with Scott Brock, who has worked as an editor and consultant with our 10 to Watch filmmaker Thomas Ikimi on several of his projects. Brock is a UCLA graduate and an award-winning editor with twenty years of editing experience. He has assisted editor Thelma Schoonmaker on several films for Martin Scorsese, including Shutter Island, The Departed and Casino. Brock worked with Ikimi on Limbo, Legacy, on his network series The Temp, and as a consultant on Ikimi’s feature documentary, Homefront.

Mike Sullivan: How did you first come to work with Thomas?

Scott Brock: I met him on his very first film project, which was a feature project, called Limbo.  I met him and read his script and I knew instantly I wanted to work on that project.  He was quite a different kind of writer, and something of a breath of fresh air, at a time when big superhero VFX films were beginning to hit their stride in Hollywood.

MS: How prepared is Thomas in the edit room?

Brock: Completely. Except for Limbo, which was shot when we met, we both have always discussed the project long before it shoots. He will let me read several versions of the script, and he makes thorough and fully realized storyboards. A lot of productions, by the way, don’t do storyboards anymore; they do shot lists. As visual artists and storytellers, I’ve never understood why this trend towards shot lists gained its de rigeur status. Storyboards bridge so much in describing the style of the film and fulfilling its total construction; his especially are so thoroughly delineated. They are so, so very helpful.

MS: Does he sit with you or allow you some time to work with the footage yourself?

Brock: Both. And he strikes an absolutely perfect balance between the two. We both completely trust each other’s sensibilities and each other’s understanding of what we need and/or would like to do. That’s not to say that we agree with each other all the time; we don’t. And we allow each other – vigorously – the ability to do that, if we feel strongly about a scene or a section of dialogue or an entire scene flow construction.

In the end it is his project; the decision is always his, and of course we both know that, but we both feel comfortable about voicing our opinions. Sometimes he does feel that he needs to steer a scene in a very, very specific direction and that’s when he will sit with me – or he may want to edit the scene himself until he gets it in a shape that starts to resemble the direction he wants it to be taking. I know some editors might feel a bit uneasy about that, but I’m something of an old-fashioned editor in that I firmly believe in the Frank Capra “one man, one film” mantra. It’s the director’s film, and he can do anything he likes to get it to where he wants it to be going. But that does not happen that often anyway, mostly because of how well he is prepared and how he helps prepare me as well.

MS: As a filmmaker, what qualities does Thomas bring to the table that are different from other directors you have worked with?

Brock: He has an acute and original intuition to his vision and pre-visualization when he plans his projects. He is well-read, which is a big factor as to why his scripts are so well-written. All of us who do this for a living love film, but very few of us take or get the opportunity to have an immersive study of it. When he was young, he saw literally hundreds and hundreds of films from his family’s video library, so he has developed in his creative repertoire an immediate bank from which to withdraw an enormous amount of inspiration for visual and sound construction.

MS: The relationship between editor and director is one of the most important for a film. Have you and Thomas found a way of working together that has developed over the different projects?

Brock: Definitely. It’s as if we have developed a shorthand based on each other’s sensibilities. The storyboards and script versions he sends help in becoming an important part of that shorthand. I might work on a scene a certain way, but I’m always thinking about both his comments as well as his preferences and sensibilities – and the storyboards. Sometimes I might cut the scene based on that, even if my own preferences might be different. Or I’ll present different versions if I feel strongly enough about it.

To see a few pages of Thomas Ikimi’s script for Nostradamus, check out our Facebook page.