Filmatic Festival, at University of California in San Diego, shines a light on the science and technology and the inner geek in all of us. 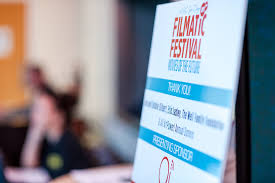 The Filmatic Festival  is a forum for that film geek and science nerd in all of us. It describes itself as dedicated to “the art of science and cinema” and explores the convergence of science, technology, cinema, and the artistry that can develop from it. The festival ran from April 30–May 3 at University of California, San Diego, in Atkinson Hall, a building that looks like it could be from the set of the Big Bang Theory, but is actually the headquarters of the Qualcomm Institute at the campus. Qualcomm is also a sponsor of the festival, as is Stromer and Arc Light Cinemas. ArtPower at UC San Diego runs Filmatic, along with other events throughout the year, such as music, dance, film, and exhibitions. Filmatic is the first of its kind in California and only in its second year, but it packs a punch. The festival showcased a variety films, digital games, music, interactive performances, workshops, and indoor and outdoor exhibitions, over the four days.

At first glance, one can easily find similarities between Filmatic and new media initiatives in other film festivals, such as Sundance’s New Frontier or Tribeca’s TFI Interactive. All are dedicated to exploring the future of film, as the film industry, and media in general, is rapidly changing.  They all look at how the art form is transforming traditional passive audiences into active participants in immersive and alternative film experiences. But what distinguishes Filmatic is the deep connection to science and technology over story, fostered by the UCSD and Qualcomm Institute foundation.

A key challenge of these types of festivals, particularly one as science-focused as Filmatic, is to make this highbrow–and very complex–science, not only engaging, but meaningful and relevant to audiences. While work steeped in storytelling has an easier time of this, Filmatic found the humanity in several ways, including programming artists talks before and/or after performances describing the process and background, using professors, artists, and graduate students to staff exhibits and mingle around, and providing written explanations of each event and exhibit. 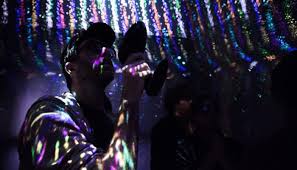 Of the plethora of things to do at Filmatic, the exhibits that were highlights for me are below.

The keynote on Thurday night, entitled Weaving Mercury kicked off the festival with a talk from Alex McDowell, most known for his production design work on Minority Report and Fight Club, but also co-founder and creative director of the University of Southern California’s 5D Institute dedicated to the art and science of “world building” and former Visiting Artist at MIT’s Media Lab, and Sergei Gepshtein, a vision scientist at the Salk Institute. McDowell discussed storytelling as it relates to world building – “storytelling contextualizes the unknown,” he told the audience. And, Gepshtein described what affect the audiences interpretation of visuals has on a film.

San Diego Studies is a lovely series of four time lapse and manipulated videos to reveal hidden patterns and rhythms in the city of San Diego. Filmmaker Cy Kuckenbaker said of his inspiration for the series, “This city can sometimes have a plastic one-note reputation so that invites you to figure out what it really is.” The loops include airplanes leaving from the San Diego airport, mid-day highway traffic re-ordered by vehicle color, a skateboarder in a skateboard bowl, and, yes, surfing on the San Diego beaches. Each frame in the loop is so visually engaging that it could be and picture unto itself.

The traffic organized by color creates a streaming effect that sneaks up on you. Each piece has a unique rhythm, whether it is the lull of the traffic or airplanes or the swish of the skateboarder. In that piece, the same boarder is seen multiple times sliding up and down and back and forth the bowl, narrowly missing the other images of himself. At the end, they leave the park one by one. Leaving one lone skate boarder to wrap it up.

Filmatic displayed each across a 4×4 screen. Each includes the environmental sound and no music. The series is supported by San Diego’s Museum of Photographic Arts and it was shot on a mobile phone – a Nokia Lumia 390, and meticulously edited without any CG elements.

Memory Lines  is a movie lovers delight and the work of The Independent’s own Neil Kendricks. The film, one of the more story-oriented pieces in the festival, was exhibited as an outdoor projection in the evenings, of a looped short, just over four minutes long. It is a dialogue between two characters made up entirely of famous movie lines. You know those lines–from “You talking to me?” to “There’s no place like home.” How about “I’ll have what she’s having.”? And many more classics. However, the film re-contextualizes each line because now that they fit together in a new story, each line takes on a different meaning than the one that we know. “Neil wanted a different intent than the original lines. We had to re-invent them to find the new story,” said Jade Martz, one of the actors in Memory Lines told me.

The two characters, a man and a woman, meet and sit in a movie theatre whispering back and forth. “We created the relationship between the two characters. We created a new sub-text for the lines and had to find the motivation for these lines within the characters and situation,” said actor Matt Hoyt.

Haunting music, composed by Mike Mare and Will Brooks accompanies the piece. “I didn’t want to do a parody,” said Neil Kendricks, the film’s director, writer, DP, and producer. And it doesn’t play as one, but rather an experimental film that explores the social context of film. “It’s about taking ownership of the movies that you love,” said Kendricks.

There is a simplicity and playfulness about Memory Lines. There is also a slight awkwardness to the movie-line dialoged, reflecting the very real awkwardness between two people meeting for the first time. The imagery is simple – a black and white image of just two people, formatted for and projected on a rock sculpture in the Atkinson Hall courtyard. The textured rock adds a unique depth and dimension to the image. The rock sculpture that this film plays on–the belly of Tim Hawkinson’s massive Bear sculpture, a playful part of UCSD’s Stuart Collection.

Kendricks said that he plans on creating version that can play as a stand alone short, sans bear sculpture. He is also shooting a documentary about comic book artists called, Comics are Everywhere, and a three-minute video-artwork, called Wounded Sky with artist Carlos Pelayo. Wounded Sky premiered Saturday, April 25 and will screen at the Bread & Salt Art Gallery in San Diego through the end of June 2015.

Filmatic included a, much needed, (in my opinion) series of events, which they categorized as “slow art.” Slow art, a term described by Arden Reed, Filmatic Co-Curator and Arthur M. Dole and Fanny M. Dole Professor of English at Pomona College, in an essay on the Filmatic site, is a nice counter to the high-tech aspects of the festival, but also a chance for the viewer to think about the our culture of speed and instant gratification driven by our high-tech and Internet-focused society. What are we missing out on by not truly taking in things?

One such piece of the slow art series, is Stainless, by Adam Magyar a Hungarian artist and photographer. In his work, Mgyar, films, in black and white, an ordinary people standing at the Alexanderplaz subway station in Berlin. Then he slows down the footage so much that the people seem frozen in time, until you catch a glimpse of a small child running in the background – so gracefully and purposefully – or a woman weaving through the crowds, her faster pace drawing your attention. The result is hauntingly beautiful and surprisingly riveting.

Filmatic presented Stainless and other slow art video events, as looped video in various theatres in Attkinson Hall and participants could wonder in and at sitting either standing on chairs or comfy beanbags. The slow art series included four films, one of which was Visitors, a film by experimental documentarian, Godfrey Reggio.

Reggio, a filmmaker with over 30 years of experience in this genre, whose last film Koyaanisqatsi was released in 1983. Like Koyaanisqatsi, Visitors is without a story, dialogue, or characters and uses visually arresting imagery. He spoke about Visitors, both before it and afterwards. He prefaced the unspoken film by saying “it’s not entertainment or informational. It’s a pictorial composition, like visual poetry. If you are looking for meaning, you might as well leave,” he told the audience. He said that in fact he expected that many of us would leave in the middle.

The film is a meditation of about the trancelike effects that technology has on human beings. “Technology is now the environment of life,” Reggio said. Meticulous black and white images slowed to 70 frames per second of people and children watching TV, playing video games, or watching sports fill the screen – almost from the point of view of the TV or machine itself. We see he micro-expressions of a child reacting to something on TV – she looks sad, angry, puzzled at times, and always deeply engrossed in her own world. So transfixed that it’s almost a confrontational stare into the camera.

The film is made up of just 74 total shots in the 87-minute film and all are stretched over time. Having spent 14 years as a monk, Reggio can tell us a thing or two about mediation and slowness. It took seven years to make. Every image was highly affected in post to make it look as natural as possible.

In only its second year, the Filmatic Festival is undoubtedly still finding its stride, as it explores the technology and science behind and related to film and new media. By focusing as aspects of storytelling rather than stories for the sake of it, the festival takes a different tact than the new media arms of other film festivals. This unique lens will make Filmatic stand out in years to come. As for the slow art theme, one cannot help but realize that slow and careful observations honors both the film subjects and the work itself. Something that is much needed in the way we all consume media.