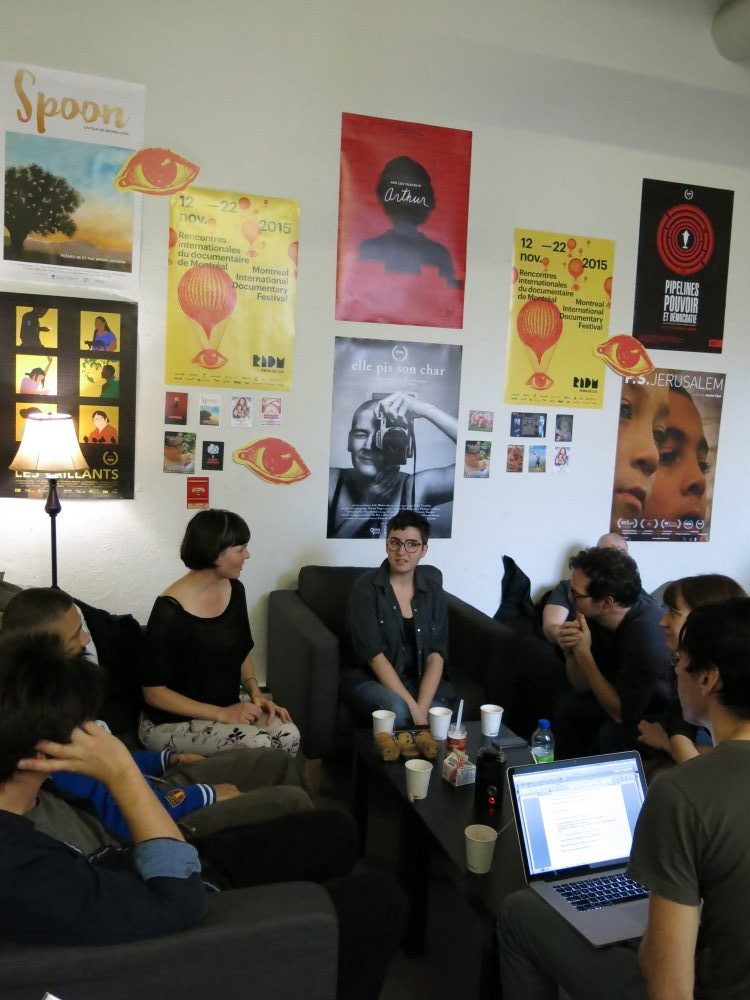 As the Recontres Internationales de Documentaire de Montréal continues to stake out its distinctive terrority, Patrick Pearce gathered five of its filmmakers to field a few questions on style.

November seems a fittingly weighty month for the Rencontre Internationales de Documentaire de Montréal (RIDM). With a sharp program spanning every type of documentary form, the festival’s aim is “shift our ways of looking at the world,” according to its art director Charlotte Selb. Staff writer Patrick Pearce invited her along with five slightly bleary-eyed filmmakers one morning after one of the festival’s nightly music events to discuss elements of style in the context of their films.

To grasp how style comes into play in each film, summaries and trailers are helpful:

In their crowdfunded I’m Gone: A Film About Amy, Québec filmmakers Julie Bourbonnais and Geneviève Philippon use fog-blanketed tracking shots and abstract hand-drawn animation on 16mm film to shift time and mood in the stories and occasional shenanigans of recovering heroin addict-cum-folk musician Amy as she leads her band/family to a Nova Scotian island to record an album.

A very different type of character essay, New York photographer and filmmaker Khalik Allah’s Field Niggas is an ever-shifting ballet-like montage of slowed-down moments that capture the pride, strength, fragility and neon-lit beauty of the poor, homeless, disturbed or drug-addicted people that disembark at or choose to hang around a single corner in East Harlem. The film took the RIDM’s award for Best International Medium-Length Film.

In A Summer Love, Montreal-based filmmaker Jean-François Lesage roams his city’s Mount Royal at night, dwelling on amorous bodies in the grass, excited faces chatting around a campfire and other sources of light and angst, punctuated by short unhappy love poems, and the dark synth pop of duo Gold Zebra, whose debut LP has been aptly described as “a break-up record.” The film was awarded the Grand Prize for Best Canadian Feature.

In Psaume, which translates as “psalm,” French filmmaker and performance artist Nicolas Boone has the inhabitants of an unnamed corner of the Sub-Saraha play, with silent, Bresson-like performances, in what might be called an ethnographic sci-fi, or as Boone calls it, a futurist film. Using cinemascope lensing, white body paint, and a single tracking shot (save for four elliptical cuts), the film effectively draws us into a post apocalyptic journey through allegories of this world’s demise.

Patrick Pearce: What conscious choices have marked your films in terms of style?

Khalik Allah: First, I like the slow motion look just because on a very surface level it looks beautiful. I was shooting photographs for three years before making the film and all of the work was at nighttime, and I was trying to simulate that aesthetic with the movie. The people in the street couldn’t differentiate between the still camera I take pictures with, and the video camera, the GH3, so they were holding their poses for a long time waiting for me to press the shutter, and I was shooting video.

Allah: So it made it like a photographer’s documentary. But the slow motion also because in that one corner, there’s a lot happening. Police cars, people running, people getting arrested, you got the subway. And it’s all fast, so to see it slower makes it automatically more beautiful.

Julie Bourbonnais: And allows you to see better and think about what you are seeing.

PP: In your film, the style seems to be coming a lot from the characters themselves.

Allah: Definitely. [They’re the] people that most people would avoid, because they’re drug-addicted and homeless. So to make that digestible, the style has to be poetic to make people receptive to what I feel.

Bourbonnais: As we were following a group of people who were producing music in a low-tech way, we took the decision early on to keep something that’s analog and direct.

Geneviève Philippon: And yet the final result is not that raw, because it was our first feature length film, we took the opportunity to try everything, so we said we want to do time lapse, slow motion, 16mm animation. We also reacted to the environment. There was a beach where we were allowed to drive with a car, so we took advantage of that when the weather turned foggy. 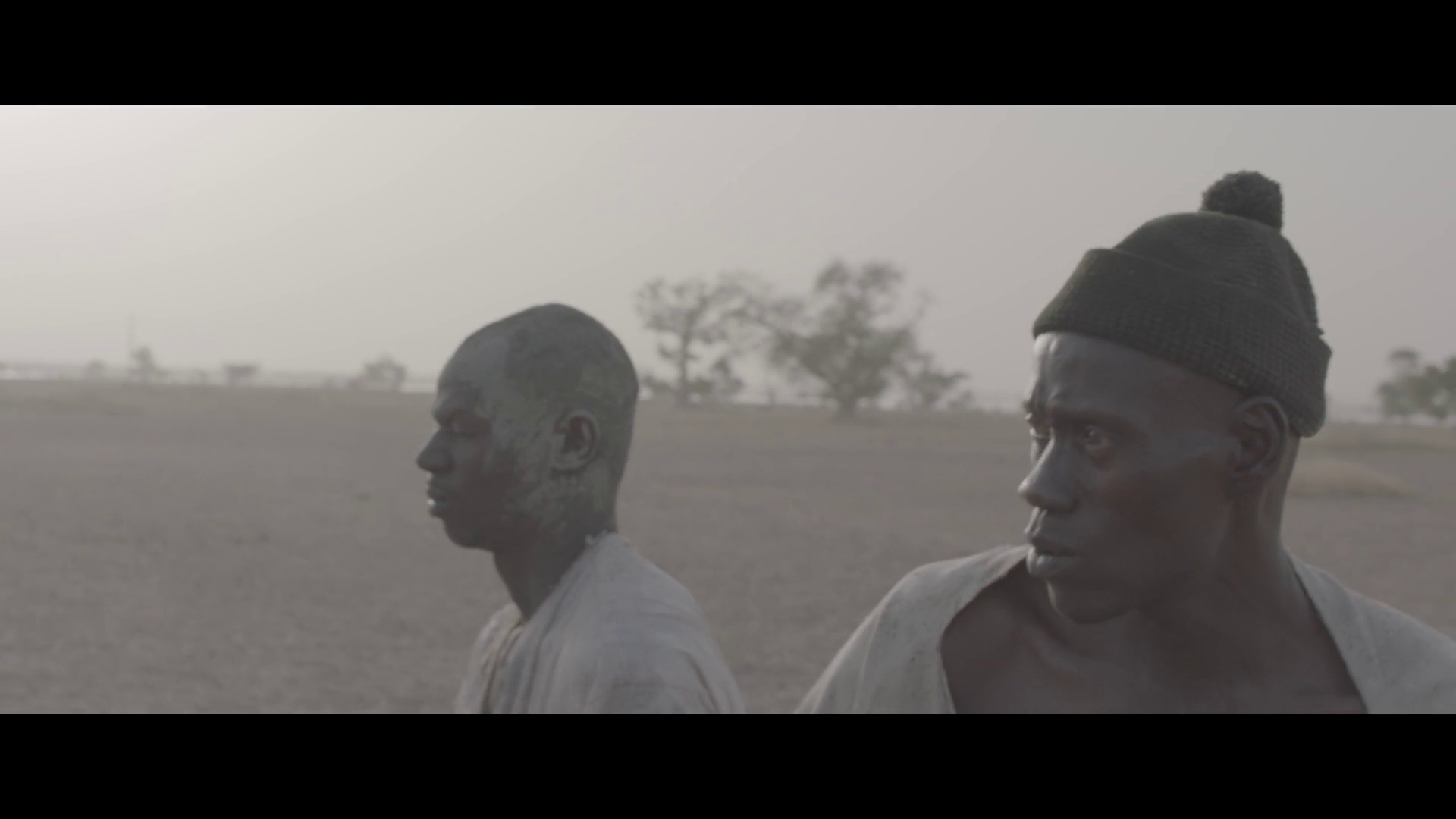 Nicolas Boone: For Psaume, I wanted a one-shot movie, and I asked the cameraman to be very close to the characters, and sometimes a little far, always moving.

Bourbonnais: Did you feel this idea of one shot was really African, in terms of style?

Boone: Yes. The one shot was really about stretching the time as much as possible. And I see it also as a return to the real moment of cinema, which is the shooting. No editing, or very little.

Lesage: Sometimes, it’s more things you choose not to do that define your style. For example [speaks in a mock dramatic voice] I will never do a time-lapse, ever. [Laughs.] Or I will choose to use a tripod all the time. Very often it’s laziness that will guide my method. So I’m thinking I don’t want to run around Mount Royal with a camera on my shoulder. Okay, tripod. So I’m going to stay here for an hour. And then raccoons appear. So I stay for another hour. Shooting only at night and without any artificial light is also a choice that becomes stylistic, in a way. At the beginning of the project, I also decided to work in collaboration with a poet I liked and a band that I liked. So already these would give the style a certain direction, because of the kind of music they make and the kind of short poems he writes.

PP: What influence has fiction film had on your films?

Boone: For me, there is always a fiction film behind my film. For Psaume, it was Gerry, by Gus Van Sant.

Lesage: I love the expression “documentaire de création” [creative documentary]. Before I heard that word, I was wondering what I am doing in life, and what is my purpose. And when I heard that word…

Bourbonnais: You saw the light. [Laughs.]

Lesage: Yes. Okay, my material will be reality. People who are being themselves. I will try to create a universe or an atmosphere around these people, places, around these real conversations that are not scripted. It is aiming for fiction somehow, but with the real stuff. Sometimes I’m watching what I’ve shot and I’m like, ‘I could have never written that dialogue.’ People are really good actors in documentary.

Bourbonnais: Andrea Arnold’s Fish Tank with an actor who was not an actor. It was very hard to tell it was not a documentary. It was really on the line.

PP: How do style elements change the audience’s relationship with the film? 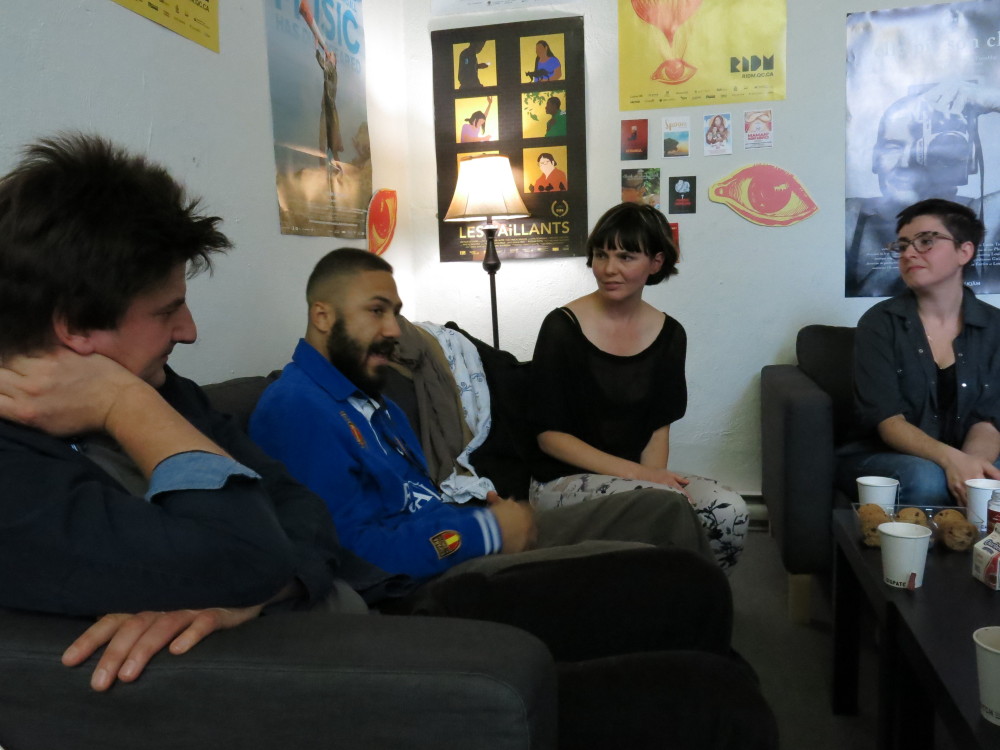 Bourbonnais: Different styles of movies will touch different audiences. I come from the art world, and I find I react very differently to seeing installation art or video art in the museum than in the cinema. I think it’s interesting to bring that into documentary, because you will be able reach either a different audience or a different part of the person, that’s not triggered by cinema that regulated by very predictable codes. Maybe you’re going to get an emotion that they will not normally experience.

Boone: I think when I make a movie, I never think about the audience. I don’t have a producer putting pressure on me. I want to experience my idea of time and I’m looking to do a film juste [just right] in the absolute sense that serves the story, the characters, the landscapes and the tension I am looking for.

Philippon: During shooting, we don’t think of the audience, but in editing, we cannot not think of the audience. For me, it’s not about the cuts, there’s a current we are looking for. At one point, we wanted to make this really long, abstract shot with the character telling us something; the deepest point for her in the movie. And we wanted not to see her during that time, and only see scratch on film.

Lesage: Is it when she talks about her family? When she brought up the darkness?

Philippon: Yes. And I feel everything that we did before was to bring the audience to that point.

Lesage: It works. It works well.

PP: Of those that have seen Jean-François’ film (A Summer Love) can you talk about how the music might have affected your connection to the film?

Bourbonnais: I think in this case the music contributes a lot to the experience, to orient the audience towards what you are feeling. 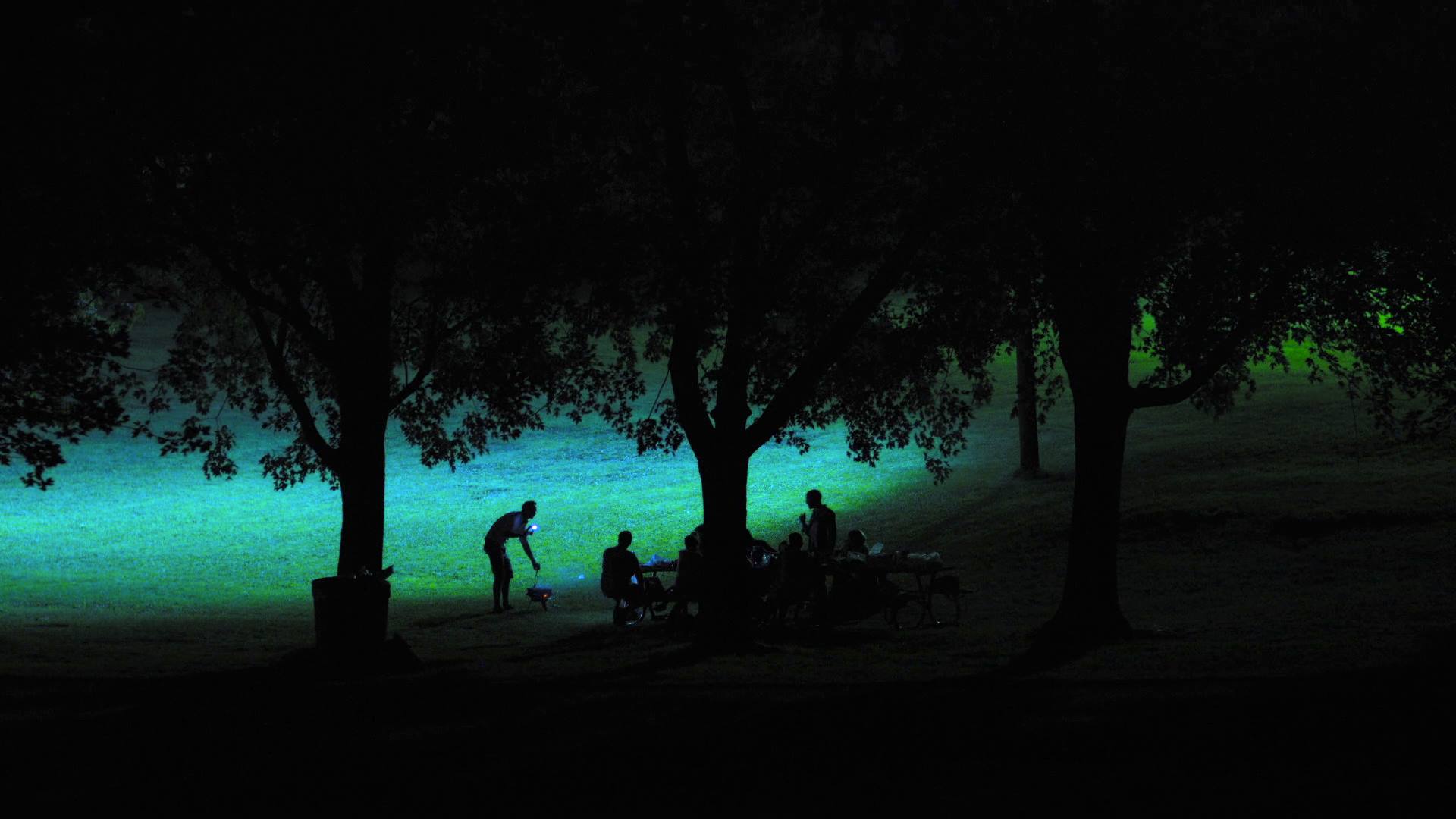 From Jean-Francois Lesage’s  “A Summer Love,” shot in Montreal.

Lesage: It’s funny, because I thought that because it’s electronic music, my parents will hate this film, and they will hate the music, and maybe they shouldn’t ask all their friends to come and see this. And my parents said, “Oh, the music is very beautiful!” So you never know who is going to be your audience [laughs].

Philippon: I felt that with such a strong proposition, the music stood out, but I also felt that you were diverging from where you were going. But then during the film, someone says you fall in love with a person for their ugliness, and that when I decided that even though the music is not perfect, I love it. [Laughs.]

Bourbonnais: I liked the music for different reasons. It brought back a lot of memories of nightlife and being awake after hours. And the way the music was sometimes very loud and then not present, it is also how it is in my head. And being awake at night is a lot like that, for me. I think that it is linked to the night world, where things go up and down and get a bit weird.

PP: Charlotte, can you talk about style aspects of any of these films that might have caused a shift in the way you connected with them?

Charlotte Selb: I don’t know if this is going to answer your question. What we are looking for in our selection process is to feel like we don’t see the world in the same way after watching that film, like our world has been turned upside down. So it’s really about experience, and sharing a vision. For me, the word style has some slight undertones of superficiality. I see this as something organic, it all goes together. So if I see a purely formalist film, I may admire the technique and maybe the innovation, but then my world won’t be changed.

Lesage: Herzog says, “I don’t believe in the truth of cinema vérité, I believe in ecstatic truth.” And I think that what’s you are doing with the language you use.

Boone: Truth comes through poetry. And every film has it’s own way of bring out its poetry. You can also call it grace.

[In unison]: Moments of grace. Yeah.

Allah: You can’t create it.