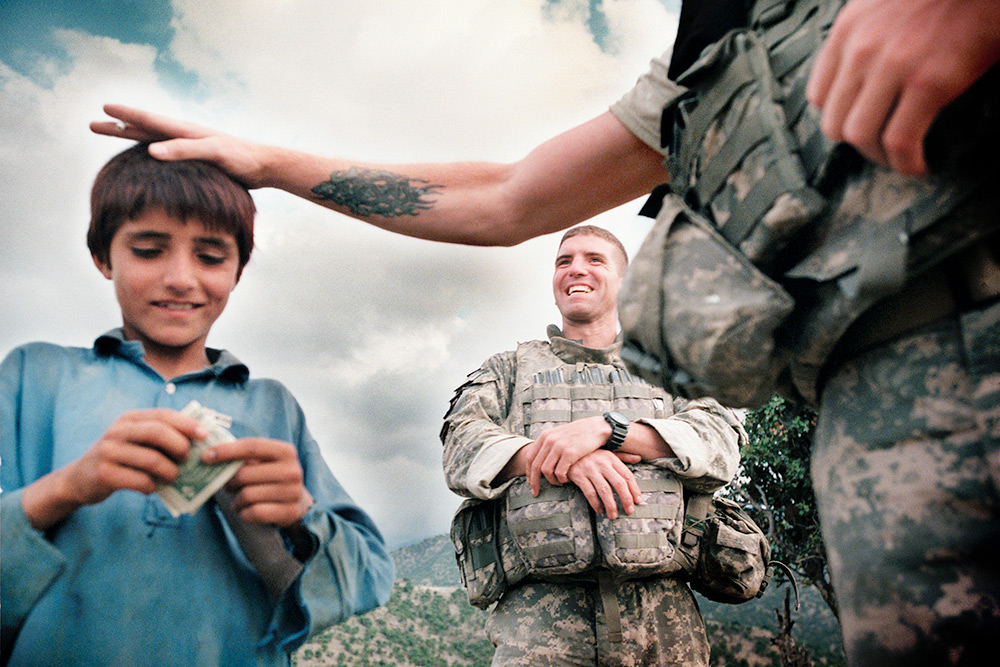 This is the first installment of a two part story looking at the making of  The Land of the Enlightened. Read more about the co-production at Working Together: The Land of Enlightened (Part II)

First time Belgian director Pieter-Jan De Pue was fresh out of film school when he traveled to Afghanistan in the early 2000s. After reading extensively about the history and current conflict in Afghanistan, as well as speaking with Belgian journalists covering the war, De Pue “was really interested and really triggered to see the country.” He began by creating photo reports for magazines and NGOs in exchange for “accommodation, transport, and translators,” which proved to be an effective way of acquainting himself with the country. “By 2008 I started traveling alone, by motorcycle, by horse, by foot, with a lot of Afghan friends,” explains De Pue. As he moved through remote areas, De Pue encountered groups of children surviving the war by selling scrap metal and old Soviet mines, while dreaming about a better future for their country and themselves. Some of the children told De Pue their dreams for life after the withdrawal of the troops, which “was really touching to me. I started writing a script about it,” he said.

De Pue’s feature debut is a markedly original film, eight years in the making, that hybridizes documentary and fiction forms to tell the story of children living in remote areas as the war draws to an end. The children play versions of themselves, carrying out daily tasks like rummaging for scrap metal to sell, excavating old Soviet mines for trade, and robbing opium caravans. Their stories are interwoven with a parallel strand featuring American soldiers in a secluded mountaintop base, whose only interactions with the Afghans are children who come to trade trinkets in exchange for food and clothes. Shot by De Pue primarily on Super 16 and 35mm, the film’s stunning cinematography was awarded at the 2016 Sundance Film Festival, where it had its world premiere. The European premiere just took place at the International Film Festival Rotterdam, where The Independent interviewed De Pue.

The long road to the film’s completion involved five co-producers, many trips to Afghanistan and even the Ukraine for shooting, an invaluably reliable hand crank 16mm Bolex camera, a Taliban attack, and 30 dead sheep (consumed by the crew for lunch). From the beginning, De Pue knew he wasn’t making a traditional documentary. “There were several reasons. All these little elements — especially those dreams of the kids — were really interesting me. I knew if I’m going to implement dreams visually in a documentary, I’m going to have to visualize this in a fictional way. I knew right away if I’m going to step into these dreams it’s going to be a hybrid structure, it’s not going to be like pure documentary.” De Pue’s strong sense of what the film’s soundtrack should be like further influenced the hybrid form. “I remember very strongly that I wanted to use Pink Floyd, the song which is now at the end, Heart of the Sun. It’s so timeless but also such a psychedelic song, so I knew that this was going together with a lot of visuals and it’s going to have like a mystical or dream aspect that was kind of clear from the beginning.”

The country of Afghanistan quickly became a character in its own right, in a way that De Pue felt exceeded traditional documentary parameters. He wanted to capture it on film, “Not only with a hidden camera trying to be embedded with the Taliban, or smuggling caravans, or trying to film realistically as possible — that was not my aim. I wanted to really make a film and go one step beyond all this realistic capturing. That’s why we ended up with a film that’s really hybrid.”

De Pue, who is also the film’s cinematographer, decided early on to shoot on film instead of digitally. “First of all I love the formats…I’ve always been a photographer on film. I just love the organic look of them. The Super 16 format, it’s so small that you have a lot of grain but of course we worked with very high speed lenses… so it’s not like in the 60s when it was really grainy, but still it has something rough. It was going very well together with the character of Afghanistan: this brutal life, this harsh life. The rough movements that we had sometimes with the handheld camera — it was going really well together with the light and the dust.” In an era when shooting on film is typically considered a luxury reserved for wealthy directors like Quentin Tarantino and Christopher Nolan, the format proved to be a practical choice for The Land of the Enlightened. “I didn’t want to shoot digital because I knew it was going to use a lot of electricity,” De Pue said. “The areas where we were filming were so remote and so far that it would be simply impossible to bring fuel for so many electronic devices. If you’re going to shoot digital you should have hard drives that need to be charged with electricity, you should have a bunch of batteries but also computers and backup stuff.” For shooting on film, “You need only the rolls. The film camera has one battery and with one charged battery you can shoot 10 rolls of film which is one or two shooting days. So you only have to take care of the batteries, and of course you can’t look through the viewfinder or the video assist to see if you shot well or not.” Despite these relative drawbacks of the older technology, De Pue’s confidence with shooting on film is clearly evidenced by the already award-winning cinematography.

A second completely mechanical 16mm Bolex camera proved invaluable for shooting in extremely cold conditions. “Even in minus 25, minus 30 degrees [celsius], we’d just wind up the [hand crank] camera and continue shooting so we never had a problem with a camera that got stuck because of electricity or mechanical failures.” De Pue was also able to economically incorporate rushes from development stages into the final film, such as sequences with the children that were captured during casting. The production started out much larger. “In the beginning when we came with a lot of crew members, we came with too much equipment. We had like four cameras. We had the A camera then we had the spare camera and then we had some special time lapse cameras and it was way too much.”

The initial crew was large, consisting of Afghans and Europeans, and a substantial amount of gear. The conspicuously large production proved to be a near fatal mistake. One day while early in the shoot with the full crew, they were attacked by the Taliban in a remote mountain pass. “We were two cars…and the Taliban set up an ambush for us. They knew that we were going to pass, local people had informed the Taliban that we would go there. The Afghan crew was driving in the first car and they got really hit. They got stopped at gunpoint they had to destroy the equipment with rocks. Everything – lenses, cameras, laptops, hard drives, everything. And then they got punched with rocks on the head. [The Taliban] did not kill them because it was the end of Ramadan and the first day of eating. They said because it’s this day we won’t kill you. But we know there are foreigners here and if we spot them and we see you together we’ll kill all of you.” The crew managed to call the police from a satellite phone, but as they approached the police mistook the Afghan crew for Taliban. “They saw us from far away…they saw people around the car and thought the Afghan crew were Taliban so they started firing at us. I was there too so we all started running to different sides but luckily the distance was far enough they didn’t hit us. It was completely messed up. Luckily there were no dead people but it was this close.”

The attack destroyed the production. The European crew returned home and De Pue’s producers discussed whether the production should be shut down altogether. De Pue’s producers suggested he make a film from the rushes he had shot in the development phase. The editor, “made something that was 50 minutes but it was so inconsistent, there was no story. They said let’s make the rest with cartoons, with animations, and I said, “Yeah, sorry, but this was not the film that I want to make. As a beginning filmmaker, this was the first step in my career as a filmmaker, I didn’t want to do it. So I said, let me continue or I’m looking for another producer, because I’m not going to stop this. We were already like 5 years on in the project. But also they had no choice because they had already spent so much money on the production that they had to deliver a film to their financiers, to their sales agents, to anybody who believed in the project…so they made a deal with the insurance that they would cover only me and I would be the only one to return to Afghanistan. I would do everything myself – financial things, making agreements, making contracts, shooting the film, doing the production, hiring and training Afghans. This is what happened in 2014. We had no choice and we did it.” 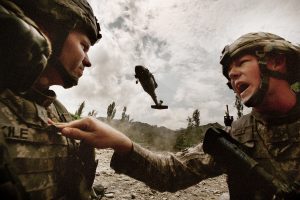 When De Pue returned by himself to Afghanistan, he realized he “had to rethink the way of filming and the way of working in Afghanistan, to go back to a really low profile way like we did in the preparations.” He scaled back to “a small amount of equipment, one car, being flexible, having an A plan, a B plan, a C plan, a D plan and changing constantly.” Ultimately, 80% of the film was shot with this small team and set of gear in 2014. With his doggedness, persistence of vision and support from his production team, De Pue saw through the completion of the film, and its release at Sundance and Rotterdam have been met with high praise.