Evan Glodell and Joel Hodge make our 10 to Watch for their next film Chuck Hank and the San Diego Twins. 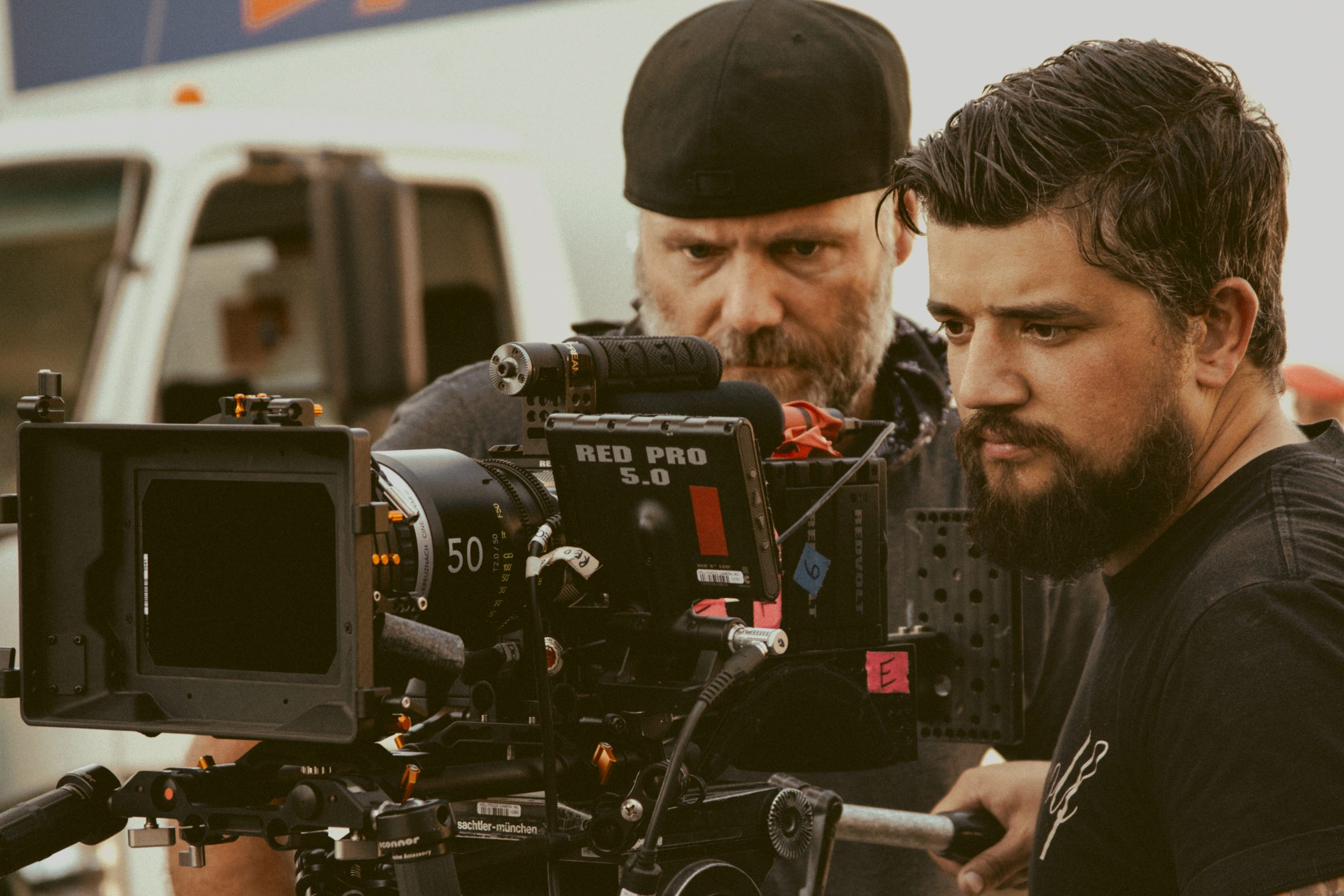 In 2011, Evan Glodell and Joel Hodge partnered to make the film Bellflower, with Glodell writing, directing and acting, and Hodge working as DP. The film, with a budget of about $17,000, became acclaimed for its stunning action-packed cinematography, resulting from their own hand-made camera built exclusively for the film.

Now, Glodell and Hodge have again partnered on their next film, Chuck Hank and the San Diego Twins, also with Coatwolf Productions, which Hodge calls “a crazy throwback to 80’s action films and side-scrolling fighting games from the ’90s.” This time around, Jonathan Keevil writes/directs, Glodell doubles as producer/actor, and Hodge works as DP.

Michele Meek: So, a “throwback to 80’s action films and side-scrolling fighting games from the ’90s”?

Hodge: These are two of my favorite genres, you couldn’t pay me not to do this. I will make any film made by Coatwolf always until death comes for me.

MM: Talk about how working together on Bellflower led to this next project.

Hodge: I was the DP on Coatwolf’s first feature, Bellflower. The film was received well. It was accepted into Sundance and later nominated for two Spirit Awards. What’s awesome about this is that all the same people who worked on Bellflower, also worked on Chuck Hank. We are a family, and making movies is what our family does.

MM: How did you fund Chuck Hank?

Hodge: We decided to do a crowdfunding campaign. The campaign ended up being a success, getting us more than we asked for. Once we had that chunk of cash we were able to find investors to match the amount, doubling the budget.

MM: How are you building an audience for the film?

Hodge: We basically did it through the crowdfunding campaign, linking and sharing it on Facebook, Instagram, etc. We also set up a website for updates on the production. A lot of people had a positive reaction to our crazy crowdfunding video and it got linked around quite a bit. I think a couple of articles got written up about our campaign as well.

MM: What did you shoot Chuck Hank on?

Hodge: We shot on Red, including the Epic and Dragon, with Zeiss SS glass. When we ran out of money we started shooting on Black Magic with a set of Rokinons. Then when we were in the darkest hour we banged out a couple of shots on the Canon 5D Mk3 and the Sony A7s. Nothing could stop us from making sure it was impossible to match shots. All joking aside, the shots are matching up really well.

As far as the look of the film, originally I was going for this throwback feel to Escape From New York, real dark and gritty, just crushing the shit out of the blacks, you know? But that got tossed out the window when we had to shoot 80% of the damn movie during the day because of budget restraints. People don’t like night shoots….Now, I just tried to make everything look as badass as I could with what I had. And the few night scenes we do have–I love how they look. Considering my light kit for the majority of the film consisted of one small Arri kit and a couple of kenos.

In the end we ended up with a lot of really pretty stuff and I’m really happy with the look of the film. The story’s insanity is fucking out of control, and I love it. I can’t wait to see this thing in theaters. I think it’s going to blow people’s minds.

MM: So, how come you didn’t use the custom Coatwolf camera this time around?

A still from Bellflower

Hodge: Deciding whether or not to use the Coatwolf cameras on this project was a big decision to make, but in the end, budget and time constraints made the decision for us.

During Bellflower, we had three handmade cameras and they helped us create the unique look that the film has—but they also had their drawbacks. A lot of the time the cameras would malfunction or break–and there was a lot of fine-tuning that needed to be done daily to keep them running properly. Since our crew consisted of five people including actors, we could get away with spending half a day prepping the rigs or even cancel a whole shoot day to fix them if we had to.

On Chuck Hank, we weren’t going to have that kind of luxury.  Between big stunts, the actors, and large crew—we had no choice but to stick to the tight schedule. I had one chance to pull off shooting all these crazy stunts and needed a more reliable camera. Now, that doesn’t mean we didn’t use them at all. There are a few select shots that we knew had to be shot on the Coatwolf Model II.