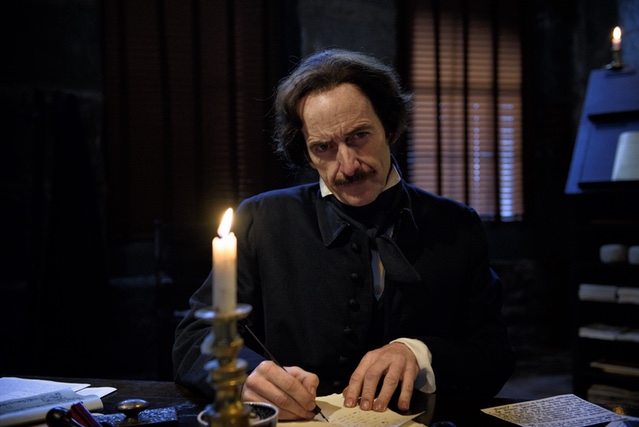 Discussing his attitude as a literary critic in Edgar Allan Poe: Buried Alive, the acclaimed nineteenth-century author (played by actor Denis O’Hare) declares, “I will not put up with, what I can put down.” Poe’s intolerance for books that couldn’t keep his attention sums up this reviewer’s frustration with the documentary’s ability to do the same. On TV, where it will be airing, it’s the kind of lazily-paced program that one could easily drift in and out of while channel surfing on a weekend afternoon.

The film explores the life of Edgar Allan Poe in reverse order: beginning with his death and retracing the steps that led him there. As a documentary, it’s an insightful look at Poe, one that dispels modern myths about who he was as a person. But, the film tries to combine too many different storytelling techniques, including performance pieces with Denis O’Hare, interviews with biographers and historians, animations, and dramatic readings of Poe’s work by actors like Chris Sarandon. With the exception of the interviews and animations (which are cohesive), the narrative slows to a crawl as the remaining elements compete for attention instead of establishing a rhythm. 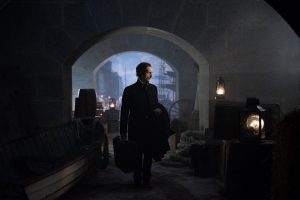 Denis O’Hare is superbly cast as Poe; his dark, brooding eyes (seemingly lost in thought) and his slight frame make him the perfect actor to portray the author. O’Hare gives an enthusiastic performance that’s entertaining; however, the documentary features him in cheesy scenes pacing around dark chambers with candles, staring at the camera, talking directly to the audience like a dinner theater actor. The silliness of these vignettes often distract from the seriousness the film aims for. Additionally, the performances of actors reciting Poe’s work, which are engaging for their stripped down backstage settings that emphasize Poe’s prose, seem to undermine O’Hare’s efforts by stealing the spotlight.

Interviews with historians, biographers, and a member of the Poe family are illuminating for how they debunk the modern perception of Poe as a debaucherous drunk, a false narrative perpetuated after his death by his literary executor Rufus Griswold. That said, interviewees never try to paint him as a saint either, talking openly about his flaws. They explain why themes of love, death, and loneliness are present in Poe’s writing by delving deep into the death of important women in his life and into his time as a child in the home of a rigid, unaffectionate foster father, John Allan. They also share fascinating information about Poe: Even though the author is associated with horror, only a dozen of his stories actually fit this genre. Moreover, Poe invented an entirely new genre of fiction, the detective story, that remains popular today.

The documentary’s animations with ink blots and images inspired by Poe’s writing give a creepy vibe, on par with the mysterious public persona that Poe created for himself, as does the film’s smoky narration provided by Kathleen Turner. While these elements jibe with interviews, they aren’t prevalent enough to establish a consistent visual theme. If the animations were more frequent, and the interviews and narration did not so overshadow the film’s performance elements, then Edgar Allan Poe: Buried Alive would be a sharper piece, one able to hold a viewer’s attention for its 1 hour 24-minute runtime, instead of encouraging him to change the channel.