A shot from Matthew Heineman's documentary City of Ghosts.

“Raqqa is Being Slaughtered Silently”—the subject of City of Ghosts—is a Syrian opposition group of journalists, many of whom have fled Syria to Germany and Turkey. They attempt to maintain their coverage of the many atrocities committed by the terrorist organization ISIS, which seized control of their home territory after a power vacuum was created during the Syrian revolution.

Heineman’s documentary focuses mainly on the daily lives of RBSS members, chronicling their bravery as well as their constant fear about the dangers they face for the work they do. Their stories are told through interviews from secret locations, through footage of ISIS activity in Syria, and through clips from ISIS propaganda films.

Heineman also concentrates on the state of affairs in Raqqa by showing how citizens are deprived of utilities, resources and forced to depend on ISIS for their needs. The film reveals this to be a major factor pushing people to join ISIS. He shows how RBSS seeks to expose the terrorist group’s wrongdoings and how difficult it is for these journalists to smuggle information out of the country—especially as ISIS tightens its grip and dismantles methods for communicating with the outside world. In one terrifying scene, citizens are forced to destroy their satellite dishes because of an ISIS mandate outlawing them.

One fascinating angle Heineman explores is the production of ISIS propaganda films, Hollywood-styled action sequences used to recruit members and glorify the terrorist cause. The effect of these videos on young people is frightening: one alarming clip features a small child, decked out in soldier’s attire, hacking off a stuffed bear’s head with a large knife. With his documentary, Heineman effectively shows how propaganda undermines the reporting efforts of the RBSS and distracts the world from engaging in meaningful conversation about what’s happening in Syria. 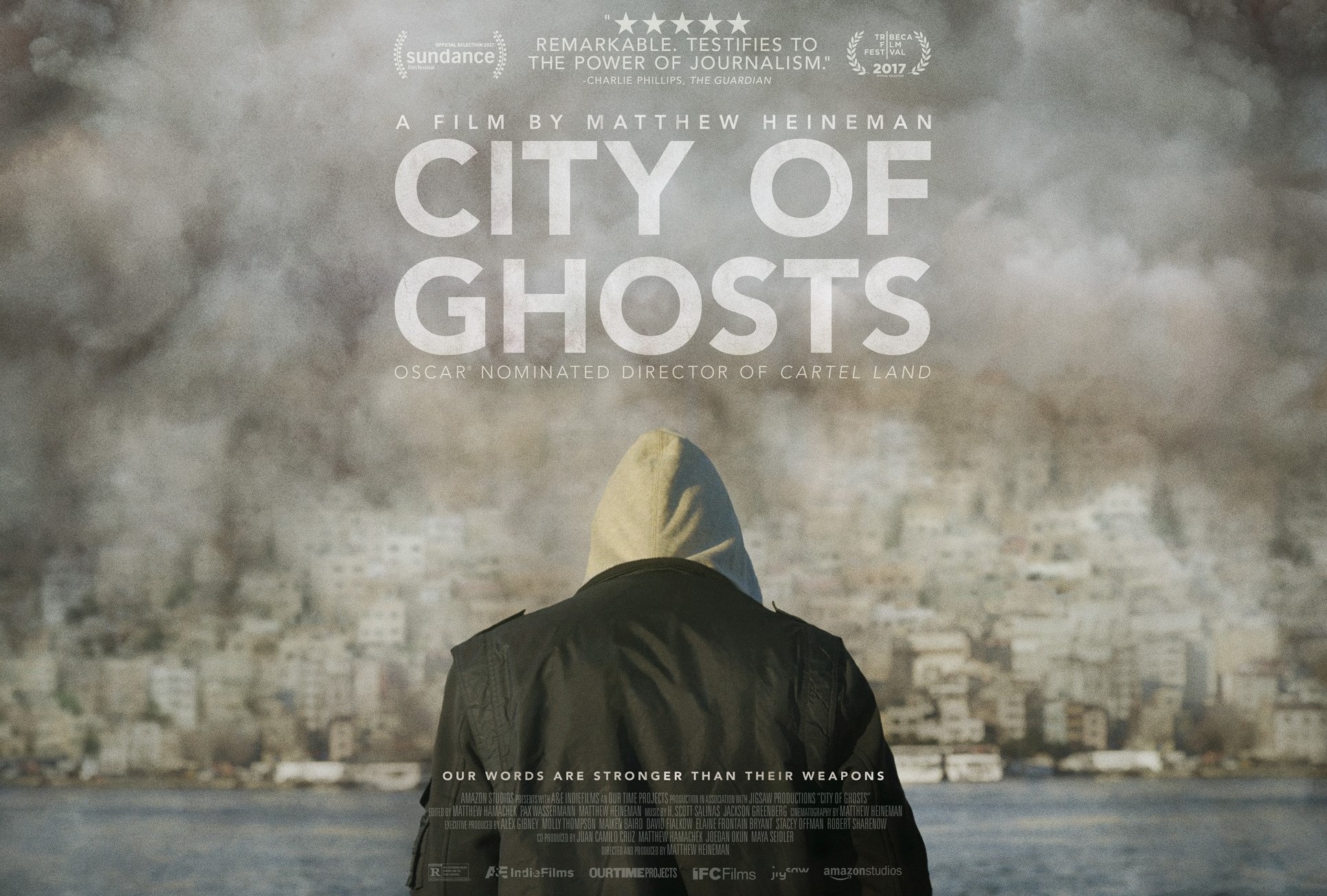 Poster of City of Ghosts

Needless to say, City of Ghosts is not for the faint of heart. People get executed and tortured on camera, including RBSS family members who are killed in retaliation for the group’s activities. One particularly gut-wrenching sequence involves two brothers, who separately watch a video of their father’s execution and deepen their motivation to continue fighting against ISIS. Not surprisingly, the scene moved many viewers at IFFBoston to tears.

Despite the gravity of its subject matter, City of Ghosts does not offer an entirely depressing worldview. Brief moments of levity offset the violence and horror of the film. Heineman shows RBSS members enjoying one another’s company and sharing simple pleasures. Still, these moments are fleeting, and everywhere there is a sense of precariousness: RBSS journalists sleep in uncomfortable positions, ready to spring into action if necessary. Another unexpected bright spot is the film’s crisp footage and gorgeous sun-soaked cinematography, which serves as an effective contrast to the awful events depicted.

This documentary exposes the harsh realities of one of the worst humanitarian and political crises of this century. The more people know the fullness of this tragedy, the greater the chance that the international community will find a solution. For that reason, City of Ghosts, though difficult to watch, is critical viewing.