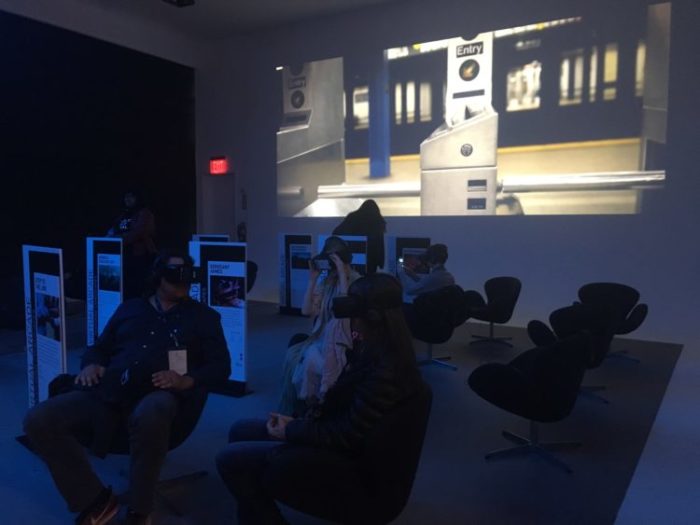 The medium of virtual reality (VR) has matured and diversified greatly as a format over the years. It is almost not enough to describe a work simply as VR anymore, but rather one must specify by genre or device: narrative, game, installation, mobile, or some combination thereof. 360-video is a different animal, but often lumped into the VR category. Tribeca Film Festival, which ran from April 19th–30th, captured this diversity in its aptly named section, Immersive. Immersive showcased the amazing range of VR, notably its use as a tool for storytelling that gives viewers an up-close perspective.

The term “virtual reality” describes the perception of being physically present in a non-physical world. Technologically speaking, this involves 360-video, 3D, and sound that adjusts, interactively, as the user moves. VR formats aim to give users agency and a feeling of presence in the story.

Diversity in genre and technology 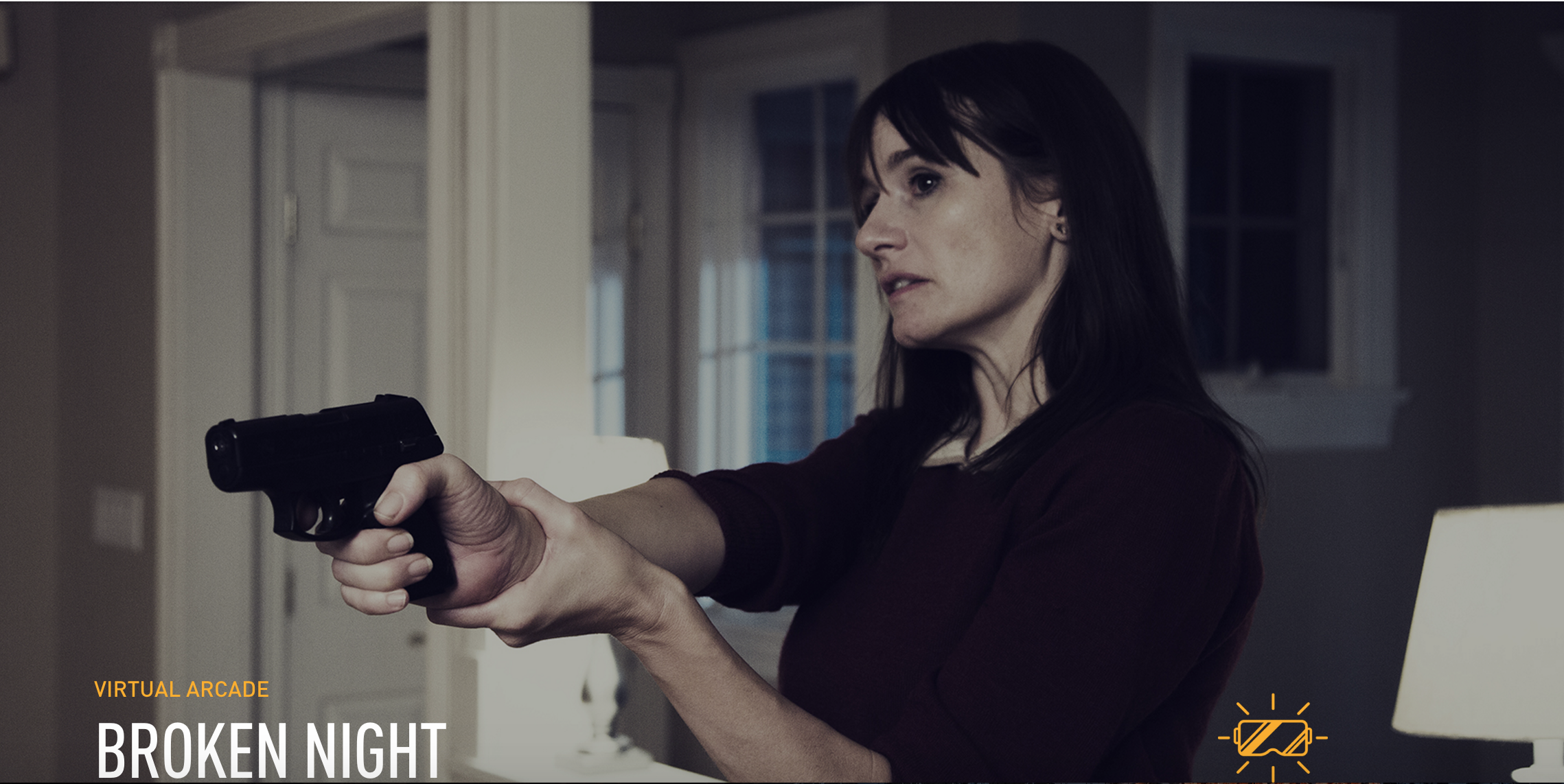 Narrative stories in VR are growing. In Broken Night, Directors Alon Benari and Tal Zubalsky harness the interactive and immersive nature of VR to tell their story. As a user moves through the VR experience, he/she shapes the memory of the main character (played by Emily Mortimer) and determines the story’s ending. The 10-minute film, shot in stereoscopic 360-video, puts the user in the middle of a drama where a couple confronts an intruder in their home. Mortimer worked with her husband, Alessandro Nivola, who plays her partner in the piece.

“It’s an odd experience being left alone with this 8-eyed monster,” said Mortimer of the 8-lensed, 360-camera. “Everyone clears out of the room and, because there’s no audience, it’s difficult to know where to direct your performance. You need to lock into your scene partner and go for it.”

Multiple versions of the dramatic experience (which some call an open narrative) work to highlight the main character’s fractured mental state. “With more than one narrative, the possibilities are endless. It’s exciting,” said Mortimer.

The Protectors: Walk in the Rangers’ Shoes

In The Protectors: Walk in the Rangers’ Shoes, Directors Kathryn Bigelow and Imraan Ismail use 360-video and sound to put audiences in the middle of a team of rangers protecting elephants from ivory poachers in the Democratic Republic of Congo’s Garamba National Park. This work premiered at Tribeca Talks on Saturday, April 22nd. The large audience wore headsets attached to mobile devices for the 8-minutes. The solitary experience—occurring while in a crowd—felt remarkable. Sharing in the rangers’ journeys— through the tall grasses where the elephants graze—following their training exercises and the tragedies they uncover on patrol all felt galactic. When the rangers leap out of their helicopter to attend grueling tasks, they literally vault over viewers. “This is transformative learning. It’s no longer the western gaze, but you are in the environment,” said Rachel Webber, a panelist in the post-viewing discussion. Webber is Executive Vice President of Digital Product at National Geographic, a project funder.

Hillary Clinton was the unannounced surprise of the evening. She participated in the panel to discuss the blight of elephant poaching and its relationship to global terrorism. As her presence attested, The Protectors highlights a very urgent need to protect African elephants and stem the supply and demand of ivory.

An exemplar of the combination of VR technology is The Last Goodbye. In it, Holocaust survivor Pinchas Gutter tours the Majdanek concentration camp and recalls for viewers his experience there. Co-creators Gabo Arora and Ari Palitz filmed at Majdanek in July 2016, combining 360 stereoscopic footage, 3D imagery, and a room-scale experience.

The project, designed as a singular experience, places the viewer in the room with Gutter, listening and walking with him. As he/she moves around the space, Gutter’s image adjusts to turn towards the viewer’s location, based on a 2-camera tracking system on the headset. 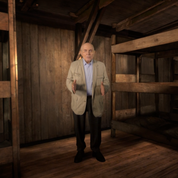 Pinchas Gutter in “The Last Goodbye”

The Last Goodbye creates the experience of talking with a Holocaust survivor. Standing in Majdanek with Gutter provides viewers with a personal connection, a feeling of his presence. “You’re not only hearing his words, but embodying the same space as him, where these things happened. You can get face-to-face,” said Palitz. “The user has the ability to go in for the close-up. Empathy is a generator of social change.”

The production company Here Be Dragons developed the camera explicitly for this project to capture both 360 and 3D. MPC VR designed the aspects for tracking Gutter. OTOY Inc. created the photogrammetry, matching the lighting around the room, and Unity developed the game engine that integrates these disparate elements and loads every frame and sound. “The loading is happening all the time and if we don’t have that balanced correctly, viewers would see delays and skips. It’s a tricky thing to do,” said Tim Dillon, producer and Head of VR of MPC VR.

VR is quickly becoming a new grammar for teaching history and for bringing buried insights to the fore. The USC Shoah Foundation, produced The Last Goodbye, along with Here Be Dragons, MPC VR and OTOY. “The Shoah Foundation is constantly trying to find new ways to share these testimonies,” said Palitz. “We need to educate people, over and again, about what humans are capable of doing. It has never been more important than right now.”

What immersion means for filmmakers and viewers
With immersive technology, creators can cast viewers in a fundamental role—as active participants in the experience. What does this mean for filmmakers working in this technology? A few guidelines stand out:

Make your audience work for it. VR innately involves giving the user an active role, so revolve your story around viewer agency and presence. The more the immersive experience drives the technology, the stronger the story is and the more natural the experience will feel to the user. “There has to be a purpose for the technology,” said Palitz. Whether the purpose is to forge a connection or propel the narrative, clicking for the sake of clicking is not going to cut it.

Train your audience. Each VR experience works differently and must communicate to the user how it works in a non-intrusive way. In the first few moments of Broken Night, the viewer quickly learns that moving right or left generates different story choices. In the opening of The Last Goodbye, two icons come up, noting when the user may explore and walk around the environment and when it is best to simply stand. “If we hadn’t used the icons the experience could have been confusing for the user. We designed hand-drawn icons to offer an educational, museum-like quality. It felt more in line with the theme,” said Dillon. “We didn’t want to take people out of the experience.”

The immersive experience must hold even with a passive user. Users must still feel a sense of presence in an immersive work, even if they do not fully interact with it. Immersive technology lends itself to repeated use because as users interact with the work, they experience something different. This means that users can easily miss an interaction. “The Last Goodbye is built as a film experience. It’s accessible even if you run through it as a film, by simply standing in one spot for the whole experience,” said Dillon. “You can take this work to anyone and they can use it. We don’t ask anything of anyone. Viewers don’t need to pick up anything or even move anywhere to experience The Last Goodbye in full.” But if they do, the experience is deeper.

The improved technology and growing demand for VR is pushing the medium towards more sophisticated and purposeful storytelling. This is great news for filmmakers looking to get their feet wet in immersive formats.