Kumail Nanjiani discusses the challenging process of casting his family in The Big Sick, his evolution as a standup comedian, and the complicated layers of immigrant identity that he explores in his film. 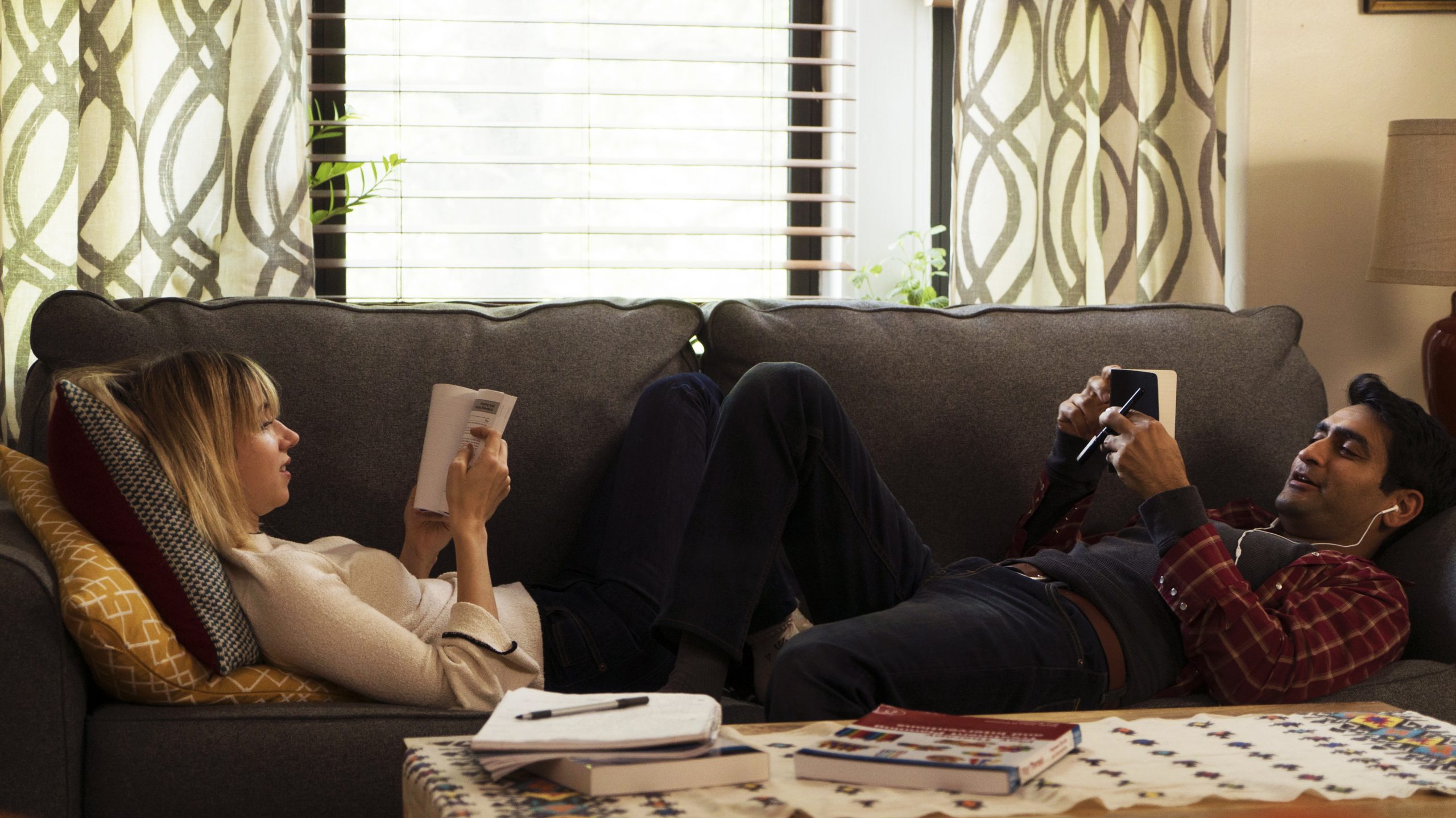 Zoe Kazan as "Emily" and Kumail Nanjiani as "Kumail" in The Big Sick. Photo by Nicole Rivelli.

Kumail Nanjiani has appeared in numerous films and television shows in bit parts over the last 10 years, but the comedian (best-known as the awkward developer Dinesh on HBO’s Silicon Valley) is finally assuming a lead role with The Big Sick, a semi-autobiographical, romantic comedy that Nanjiani co-wrote with his wife Emily V. Gordon.

The film, directed by Michael Showalter, stars Nanjiani as an up-and-coming standup comic and Zoe Kazan as Emily, a grad student studying to be a therapist. The film recounts their early relationship, as they meet and fall in love in Chicago. Just like in real life, their relationship is challenged when Emily contracts a rare disease that forces her into a coma. During this frightening time, while doctors struggle to diagnose and treat her, Kumail sticks around the hospital. He gets to know her parents (Ray Romano and Holly Hunter) and summons the courage to tell his traditional Pakistani family that he has fallen for Emily.

The Independent’s Evan Crean caught up with Kumail Nanjiani about the challenging process of casting his family in The Big Sick, his evolution as a standup comedian, and the complicated layers of immigrant identity that he explores in his film.

EC: As a comedian, where does your sense of humor come from?

KN: It’s hard to diagnose yourself, but I always sort of thought it comes from a feeling of not belonging, even in Pakistan, and having that carried over here, because I was different, like I didn’t fit in. This is the most that I feel like I fit in. When I was a kid I was very shy. I just liked movies and video games, and nobody else ever liked them as much as I did, and I remember always feeling like I wasn’t part of the group, from being a little kid all the way to college. Just feeling like an outsider. I would say it would maybe be that. 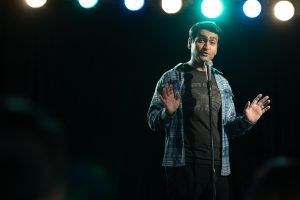 Evan Crean: How long did it take you to find your voice as a comedian?

Kumail Nanjiani: You know somebody said every five years you have a breakthrough with standup. I think Margaret Cho said that, and I think that’s true. For the first five years on stage it’s sort of sheer panic, and each time you’re swimming to stay alive. The next five years is, “Alright, I’m comfortable on stage.” That’s when you can start to figure out who you are on stage, or who you want to be, and start finding your voice. And then at the end of 10 years, you’re comfortable on stage and you have a decent sense of the stuff you want to talk about. It keeps changing, but I would say the first five years were very challenging—fun, but challenging.

EC: How much of the standup in The Big Sick came from material you’ve done?

KN: It was mostly standup I was doing around the time we were going through that. I kind of looked back at my old notebook and found material because I used to perform differently, so I couldn’t do standup the way I do it now. I had to do it the way I did it then. And if you see, there’s only one point in the movie where I pick the mic out of the stand. It’s just for me and nobody will notice it, but for me that was a big move. The first six or seven years I didn’t take the mic out of the stand. When I took the mic out of the stand it felt different for me—I felt more confident, so I could be more personal because the mic stand is like a barrier between you and the audience. It’s like a wall. Getting rid of that lets you talk to them as yourself. At least that’s how it was for me. So in the movie the only time the mic’s in my hand is my last appearance.

EC: Since this movie is so personal, how long did it take you to get comfortable sharing your experiences with the world?

KN: Well, we wrote the script for around three years. It was me and Emily writing it and we’d get notes from Judd Apatow and Barry Mendel, one of the other producers. So it was this sort of thing we had been working on, and I knew I would have to act in it at some point. When we first started writing it, I didn’t feel comfortable with that idea, but I knew at a certain point I’d have to start gearing up to do this on screen. I would say, about three years into the writing process of it, I was like, “All right, we’ve done enough writing and we can keep writing, but I have to start focusing on the performance aspect of it.” Maybe two and a half years into writing, I was starting to make myself comfortable with the idea of actually making the movie, because the writing of it and the making of it are two completely different challenges.

EC: In the film your character also does a one-man show that’s a kind of Pakistan 101. What made you decide to include two completely separate acts?

KN: What we wanted to show with that is that this character is subconsciously trying to grapple with part of himself that he’s too scared to tackle, and that he’s unable to tackle. So clearly that one-man show is the way he feels about his culture, the way he feels about his parents, the ways he feels connected from them and different from them. You’re supposed to see that he’s bumping up against this wall. That was the purpose of this one-man show.

EC: What has been the reaction so far from people in your personal life?

KN: Well, my brother has seen it and he loves it. My parents haven’t seen it yet, so we’re all on pins and needles for that one…

KN: My parents are very excited about the movie. We wrote it for three-and-a-half years and then we got funding for it, so we were like, “So now this is going to happen.” I called them and told them, “Just so you know I’m writing a movie. It’s about that period of time and how you guys are portrayed. This is how it happened in real life. This is where it deviates from real life.” And they were like, “Okay.” Then they came and visited me on set, where they got really excited. They’ve been really excited since then. They’ve watched the trailer a hundred times. They just took a picture of themselves, at a movie theater in Jersey, next to the poster. Adorable. So they’re really excited for it. My dad looks like my dad in the movie. 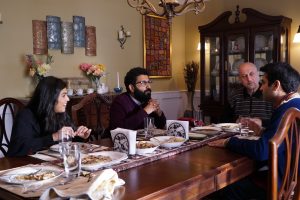 EC: What was it like having to cast your own family?

KN: Well, for my dad it was actually kind of easy. The actor we got to play him [Anupam Kher] is a Bollywood legend. I grew up watching his movies, and so the entire time I was writing it, it was obviously based on my dad, but I saw him saying those lines. I wanted him to play my dad from the very beginning. I knew he can do the comedy and the drama. With him it was easy in the sense that we knew who we wanted, and I knew someone who was family friends with him. From us trying to get him, to actually getting him was very quick, like two days, and he was like, “Alright, I’ll do it.”

The mom was very challenging because you needed someone who could do the comedy and the drama in a way that felt like the same person. And I felt that, because of the way Hollywood portrays brown people, a lot of actors were used to going for the laugh in a sort of bigger, performative kind of way. They really were going for like the wacky Pakistani kind of thing, and the reason Anupam was good, is because he was from Bollywood. They have nuanced portrayals, and Adeel Akhtar, the guy who plays my brother is British, and they have nuanced portrayals there. So finding someone to play my mom was challenging. We saw a lot of people and that was one of the last major parts we cast, because I was like, “It has to be like my mom where she’s funny and loving, but she can be angry and disapproving, and put you on a guilt trip.” My mom is a lot of different things, so finding that was pretty challenging, but when we auditioned Zenobia Shroff, I was like, “Finally! Finally we found the person who could do all those things.”

EC: Do you feel like this movie will play differently for first and second generation immigrants?

KN: I hope so. I’ve had a lot of people contact me who are in my position, who have parents that are sort of more traditional, but they’ve sort of, not had to rebel against it—but negotiate about identity in the way my parents never had to. My parents are still like, “We’re Pakistani,” and for me, I don’t know what I am. Part of the movie is negotiating that. We’ve shown it to a lot of older immigrant families, and I think we do a good job of portraying both sides so that both those sets of people who are having very different experiences feel spoken to.

The scene where I sort of make the stand against my parents that I’m in love with someone and I don’t know if I’m religious and all that, I think that’s something a lot of people in my position can relate to. Then my dad in the movie says, “The American Dream doesn’t mean do what you want to do. You still have to care about your family and other people and stuff.” So I think that scene sort of encapsulates both perspectives. I hope that they have different experiences, but I hope they connect with it in different ways.