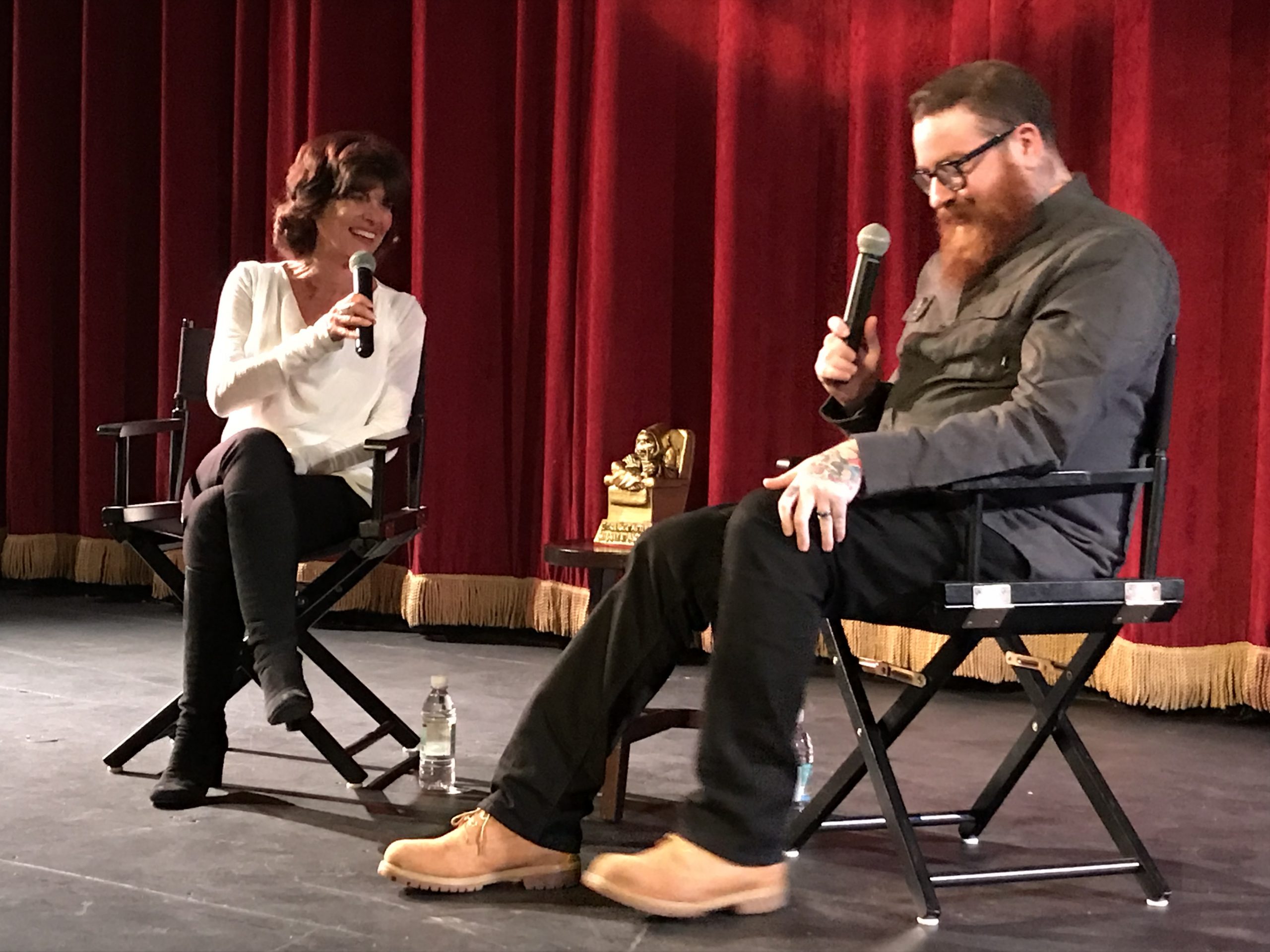 For three late Friday and Saturday nights in November and December, The Coolidge Corner Theatre in Brookline, Massachusetts ran a retrospective of Adrienne Barbeau’s major cult films, including Swamp Thing, Creepshow, Two Evil Eyes, and a 2002 short called Alice Jacobs Is Dead. The event culminated with a screening of The Fog, Barbeau’s first major role, co-written and directed by her former husband John Carpenter. The actress attended the screening, which included a presentation of the Coolidge Corner Theatre’s After Midnite Award.  I spoke briefly with Barbeau just before the screening and also attended the robust Q&A that followed. (Although the event did not begin until after midnight, Barbeau graciously stayed to sign autographs and converse with fans.)

The Coolidge Corner Theatre has run midnight movies since the late ’60s, and for the past ten years, the marquee has announced mostly cult and genre films, which are typically projected from 35mm prints. According to Mark Anastasio, Program Manager at the Coolidge, Creepshow and The Fog are two of the most requested films for the After Midnite series. So, it made perfect sense to honor Barbeau with the second annual Coolidge After Midnite Award. (Lloyd Kaufman, president of Troma Entertainment and director of The Toxic Avenger and Nuke ‘Em High, was the first recipient). “I’ve always admired Adrienne’s work as an actor,” Anastasio explained, “There’s a real social element to the After Midnite series; talking with our audience, it became clear to me that she was a favorite with them as well. We were all delighted that she accepted!” 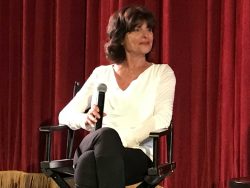 Adrienne Barbeau speaking after the screening of The Fog.

As Barbeau explains things, it was 1965 and she had left college after a year to pursue her dream of becoming an actress: “I figured I’d go to New York for a while and if nothing happened I’d go back to college and then teach acting. But by the time I was twenty-five I was on Broadway.” It was another decade before the actress met writer/director John Carpenter, when he cast her in the 1978 television movie Someone’s Watching Me! By then Barbeau had several TV credits to her name, including six years as Carol, Bea Arthur’s strong-willed daughter on the groundbreaking sitcom Maude. And she’d been nominated for a Tony award for her portrayal of Rizzo in the original Broadway run of Grease! The couple soon married, and Carpenter—fresh off having made history with his genre-defining horror classic Halloween—cast Barbeau as lead actor in The Fog. Though Carpenter wrote The Fog with his new wife in mind, Barbeau admits she was somewhat surprised when she read the script. “I had been doing things of social significance,” she said, laughing. “Topics that were important. And, along comes this ghost story…”  She went on to clarify, “John is not interested in making people think. He wants an audience to react. To respond.”

Respond, they did. Although it didn’t break box-office records the way Halloween had, The Fog was a solid, commercial success—earning $21.3 million against a $1.1 million budget—and Barbeau was discovered by a whole new audience. Still, it was an audience she did not easily identify with. “I’m not a fan of the genre,” she said. “I don’t choose to be scared. I’ve never even seen Psycho.” She may not like watching scary movies, but the actress has come to learn just how many people do and is extremely appreciative of her many fans. It was in this spirit that she made the trip to Boston. “I sometimes can’t believe we’re here still talking about The Fog this many years later.” 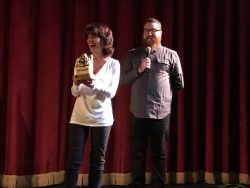 Adrienne Barbeau accepting the After Midnite Award from Mark Anastasio

It was a packed house at the Coolidge when The Fog rolled in. The print was supplied by Rialto Pictures and, although it wasn’t the cleanest or most pristine set of reels, it was still a trip to see The Fog on 35mm on the big screen. After the movie, Anastasia presented Barbeau with the award, and then she sat for a Q&A with the excited audience.  To the question of how she chooses her projects, Barbeau answered, “Character first. Always. But… sometimes there are other factors. I took a role once because my house had termites, and I had to pay to get rid of them.”  When asked what it was like to work with Donald Pleasance in Escape From New York, Barbeau replied, “One of the funniest actors I’ve ever worked with. I would have to tell John not to roll until we stopped laughing.” One audience member commented on the similarities of many of her roles—strong, proactive, independent women. “Well, I come from good stock,” Barbeau explained. “I have an Armenian mother and an Armenian Grandmother. I’m not one to play the damsel in distress.”

Adrienne Barbeau is one of a kind: classy, talented, and welcoming, with a twinkle in her eye and a sense of humor about her job. Her incredible respect for all the hard work that goes into making movies, TV shows, and Theatre is palpable.  She has five projects in varying stages of post-production and is looking for her next one. Still, when asked how she wishes to be remembered (the final question of the evening, now early morning), the seasoned actor replied, “Being a good Mom.”