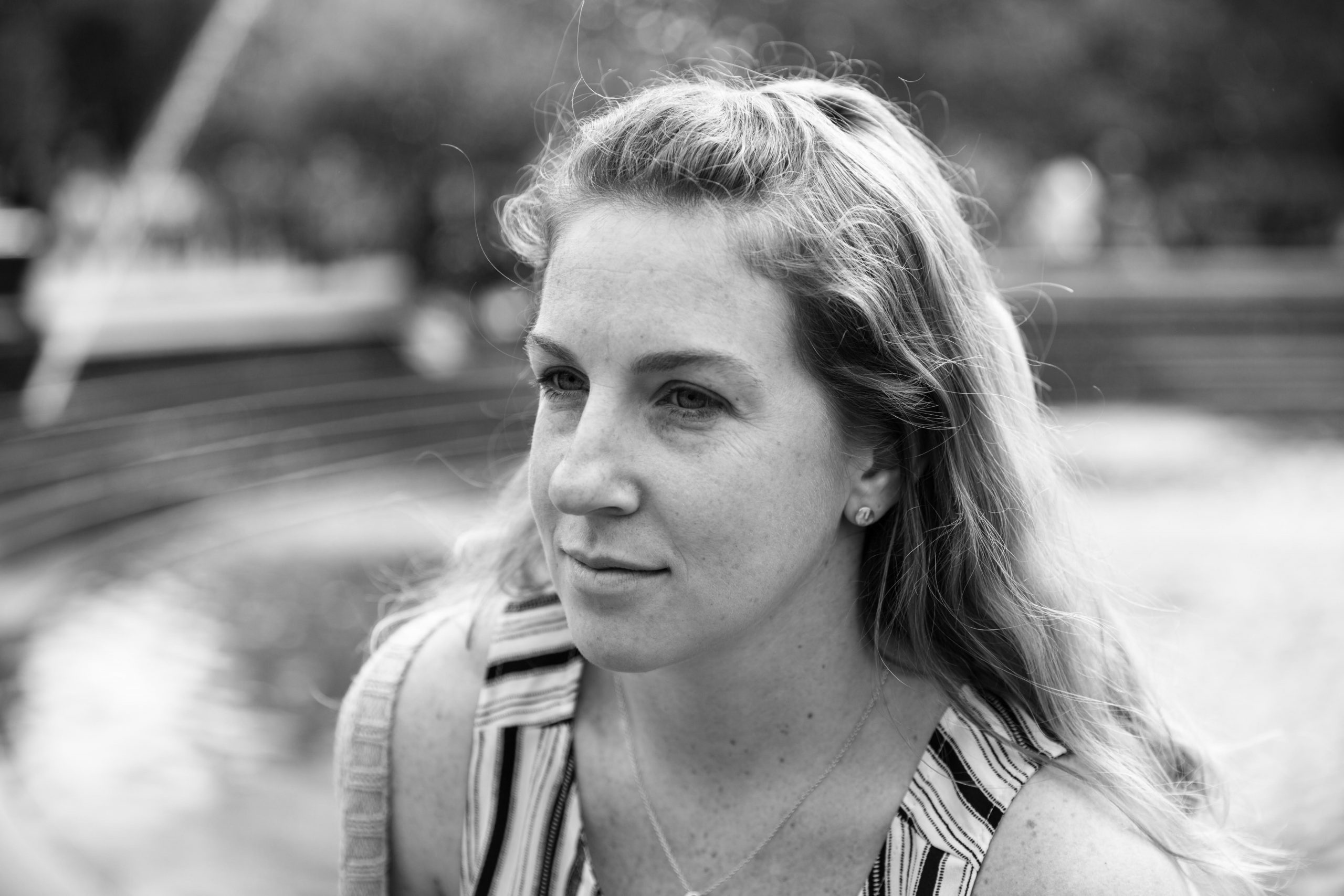 Thanks for chatting with me, Autumn! So, you’re a DP/Cinematographer. I’m always curious about the balance of a Director-DP relationship with regards to the visual storytelling. Can you talk a little about that?

I think it depends very much on the director and how long we’ve worked together, how long I’ve known him/her, and how experienced they are. There are directors who control the visuals extremely. They know exactly what they want, and I might want something else, and they’ll be like “No, no, no—I want it this way.” And I’m like, “You’re the boss.” It’s usually either a good idea or, if I think it’s really a bad idea, then we have a little debate and it usually winds up being somewhere in between what we both wanted, which actually usually is the best solution. I don’t do it very often, but there are certain shots where I’ll say, “No, trust me—you want this shot.” And I’ll bargain with them: “Okay, we’ll do it your way for like five takes, but just give me one take of this.” And you know, if it doesn’t work, it doesn’t work. So, it definitely depends on the relationship you have with them and sort of their own experiences. I might trust a very experienced director a little more than someone who isn’t as experienced.

Do you prefer to shoot narrative films or documentaries? 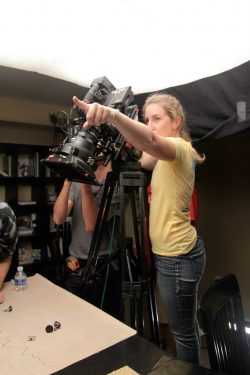 On the family room set of Of “Dice And Men”. Feature directed by Kelley Slagle

More narrative. I’d rather do more narrative. I did shoot my first documentary this fall in Senegal, which was an awesome experience. I had a great time, and I’d love to do that again—occasionally. But I’m much more of a narrative person. I feel documentaries are really tough because, at least for me, if I’m not excited about the story then I’m kind of not into it, you know? It’s a rough shooting life. I’m definitely much more narrative. I like the control, and I like the organization of it in a way. I like storyboarding. I like production. I like having at least an idea of a shot in my head before I get on set. And obviously, things happen on set, you know, like, let’s throw those pages out. And that’s actually fun too, but I don’t like being stressed about what we’re doing next. I’ve worked with and for directors and DP’s on very small projects that were such a scattered mess. And these are all non-union [projects] back in D.C, where we do a shot and then they’ll talk for 15 minutes about what to shoot next and meanwhile the crew is just sitting there. We’re wasting time, the sun’s going down.

Do you find that you like to do that prep work alone, or do you do it with a director?

So what is a challenge that you’re facing?

This industry seems to be extra hard for female DP’s. Do you think it’s an unconscious thing in people’s minds that they’re used to that being a male position?

Yeah, I think that’s very true. I will actually say I think it’s less of a thing in New York than it is other places. There were definitely some times when I was working in D.C. that I’d walk on set and they would think I was hair and makeup. And, I’m carrying a camera bag! That just immediately puts you in a mood. But, I will say that I think it’s a great time to be a female D.P. It’s sort of like a renaissance. It’s our time now. There are actually a lot of us, and we’re all similar in ways: mid-thirties range, we’ve all worked as assistants or electrics and are all now kind of coming up. It is a little more difficult, but also I’ve had people call me and say, “You’re a woman DP? I want to work with you!” And they kind of just want to work with me because I’m a woman, which I hate. I’d much rather them be like, “I love your reel, I want to work with you, bonus if you’re a woman!” But I’ll take what I can get at this point.

Who are your filmmaking heroes? 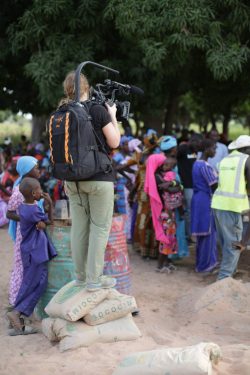 Filming a branded content piece in Senegal for BuildOn

Cliché as this is – Roger Deakins. I so admire both his work and his perseverance (14 nominations!). What I truly love about his work is he has such a range, but somehow even though Shawshank Redemption and BladeRunner 2049 are very different stylistically, there is still a sense of composition and lighting that is uniquely his. To be able to work across many genres and styles while maintaining a sense of your aesthetic is something I aspire to.

I also admire cinematographers like Rachel Morrison, who recently released a photo of herself on set just before giving birth, and Ellen Kuras, who was a female cinematographer before it was trendy. Kuras’s work on Eternal Sunshine {of the Spotless Mind} was brilliant, and she has always made herself so available to mentor and participate in the women’s committee of local 600.

Has the #MeToo movement affected you or your sets in any way?

This is a tough one; Honestly, I don’t really think so. At least not in any visible way. That being said, I have been lucky enough to always work with a great group of people, both male and female, and have never experienced some of the harassment and transgressions that others have. Though, of course, we all know that they unfortunately occur. I do think that the #MeToo movement has made everyone more aware of things, regardless of if they are directly affected, and I think it has made it more acceptable to step forward and say this is happening and it’s not ok, or to stand up for someone who may not be able to say that themselves. I do see a lot more mutual support across departments and within, so maybe that is a silver lining of this movement. I see a lot more producers and directors looking to hire more women on set and have a more balanced crew in the last few years.

Lighting for an interview in Austria for a climate change project

What are you working on now?

I just finished up a doc-style shoot in the Austrian Alps. It was amazing to work with the Austrian and German rental houses as well as some new folks from LA. I always love seeing how different people and countries work, what the differences and similarities are. It was also great to visit and be able to rent from Arri Munich, or as we call it, the motherland of Alexas. Gear aside, the location—a castle in the valley of the Alps— was breathtaking. Unfortunately, due to the nature of the subject, our challenge was to not make it look like an Austrian castle.

What’s your favorite story from a set this year?

Oh my, so many! One of my favorite moments this past year was while filming the pilot of a web series, I Don’t Want to Die Alone, where we were shooting in the Rockaways on the beach right before the hurricane. Everything kept blowing away and it was freezing. The talent was amazing and managed to convey that it was a beautiful warm day. Despite the hurricane, actually, because of it, the footage came out beautifully. The sky was just dark enough that we didn’t need to use any NDs, everything was perfectly balanced. Thanks, Mother Nature!

One of my other favorite experiences this year was operating on a doc (DP’d by Alice Brooks) about hip-hop fashion and the stylist who make it mainstream. We shot up in Mt. Vernon, in a wig shop, and the colors and styles made for some excellent b-roll. Also, it was great to have the opportunity to operate the camera under a more experienced Director of Photography.

On a sillier note, the crew house we had in Austria had a toilet that was not bolted down and the morning of the shoot, my b-camera operator somehow slid it to one side and flooded the bathroom. We fixed it in record time, and are now going to hire our services out as plumbers. 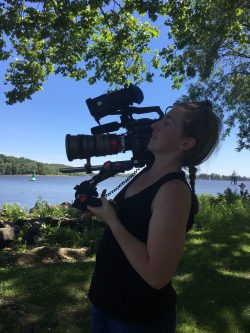 I know I’m super late to the game on this one, but I finally saw Three Billboards Outside Ebbing, Missouri. I missed it in the theaters, and I was waiting to see it until I could really pay attention to it. So I finally wound up watching it on a plane, and I thought it was extremely well done. All the characters were so well-rounded and real. And of course, the vistas used in the opening credits really put you in the town and its remoteness. I liked that it wasn’t super polished and the grittiness of the town and its people and the human-ness really came across.

What’s one thing you wish you had known when you were just starting out?

That producers aren’t the enemy. The good ones, anyway. I feel it’s very easy to get caught up in the “why won’t they just give me the money I need to do this” mindset when you are just trying to make the best product you can for them, but it is rarely a productive place to come from and will make you look difficult to work with. Also to never stop learning and watching; you can learn something from everyone. And to let go of your ego.

So, looking forward, what is your hope or goal or dream?

Short term is to transition out of being an AC (assistant camera) and just shoot. It makes me sad because I do enjoy AC’ing on one level, but it’s ultimately not where I want to be. It’s one of those things where you have to let it go at some point. With that being said, it’s been such a great opportunity to work with so many directors and great DP’s. When I’m on set as an AC, I just drink in everything—like how they talk to their gaffer (who is in charge of the lights) and all this stuff. So, that’s my short-term goal, like two years or so. And then to just keep getting bigger projects. Another goal is I want to do more dramatic, character-driven stuff. I want to find scripts like that, and producers and directors who have that kind of material. I mean, my lifetime goal is to win an Oscar. But you know, we’ll see. 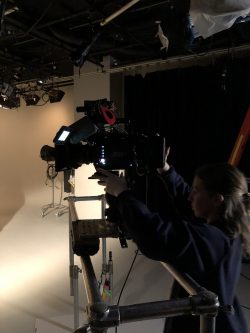 On the set of a DC Dept. of Mental Health commercial

Do you have any advice for the next generation of DP’s?

I would say, just get on big sets. Meet your heroes. Or even if they’re not your heroes. And listen to them. If you’re friendly, tell them what you want to do. Make it known. Yes, I’m loading on this, but my dream is one day to be a DP. Also just listen to how they talk to their crew. You’re going to work with awesome bosses and terrible bosses and see who gets the best result and who people enjoy working for. Also, I feel like sometimes then you get caught up in the business of it. Marketing, that has to happen. But getting caught up in budgets and the hiring of people and all that stuff…I think it’s really easy to forget about the art. Just don’t forget about the art.