An interview with co-directors/co-writers Elle-Máijá and Kathleen Hepburn about their film The Body Remembers When the World Broke Open, which premiered at Berlinale 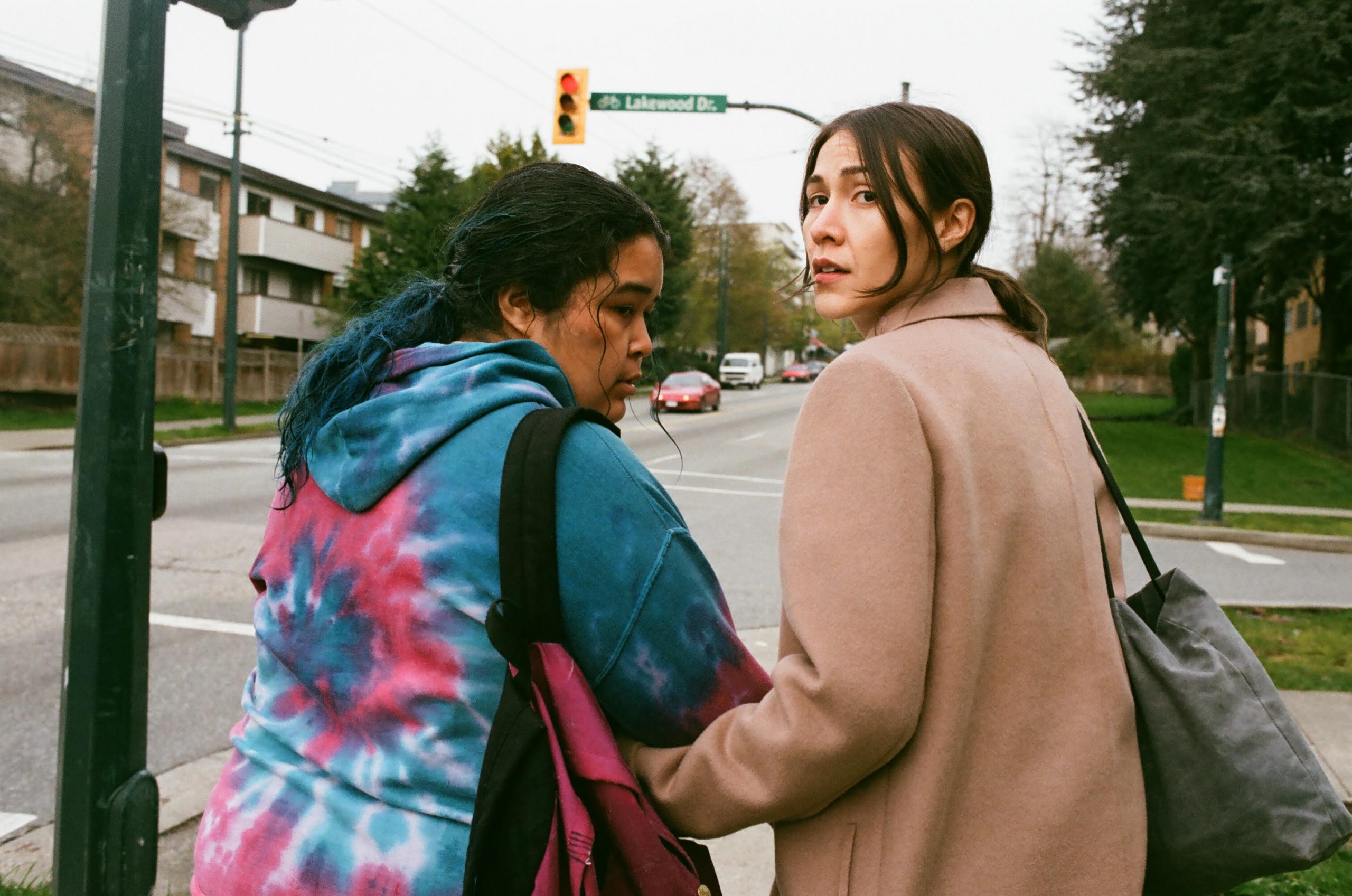 A still from The Body Remembers When the World Falls Apart

Recently premiering at Berlinale, the film The Body Remembers When the World Broke Open depicts the story of two Indigenous women who meet immediately after one of them, 18 and pregnant, has been abused by her boyfriend. The story is told in “real time,” which gives the film an immediacy and quiet pacing that draws viewers into the uncomfortable tension between the women. Produced with funds from Canada and Norway, the film resists pat solutions on abuse, and instead, it depicts the complexities of domestic abuse, privilege and charity, and freedom.

In this interview, co-writers and co-directors Elle-Máijá Tailfeathers and Kathleen Hepburn talk about some of the aesthetic and practical choices that went into making the film.

Can you talk about your decision to film in “real time”? What were the challenges and benefits of this method, and why was it important to the story?

Elle-Máijá: The film is inspired by an experience I had a number of years ago in our east Vancouver neighborhood. I encountered a young Indigenous woman standing barefoot in the rain at a fairly busy intersection. Like, Rosie, she was in distress and had nowhere safe to go so I took her home with me. Those few hours with her had a profound impact on me. I never saw her again, and I continue to think of her often. Eventually, I decided that a wanted to honour her story through my work as a filmmaker. Initially, I thought perhaps this could be a short film but knew that a short film could not encompass all of those moments in between, the moments of silence and struggling to find the right words or the right thing to do. So, the decision to tell the story in real time came quite naturally. It was what the story asked of us.

After, Kathleen came onboard we agreed that the film needed to be contained in this short timeframe and that shooting with continuous action would serve our story best. As an actor, I have often felt most creatively fulfilled and challenged by theatre—both in the rehearsal process and also being able to experience the full performance from beginning to end in one go. There’s a certain magic that can happen through the possibility of failure and having to improvise. Each performance is different and it’s an incredible type of energy to work with. Violet Nelson, our lead, had also never acted before so we felt that filming chronologically would only benefit her performance. Much like theatre, we spent four weeks rehearsing with Violet.

We had many conversations with our DP, Norm Li, and ultimately settled on shooting 16mm. This required that we develop a rather experimental process which Norm calls “real time transitions.” Once we had all of our locations, we carefully choreographed stitch points throughout the film where one of our camera assistants would have a camera pre-rolling to swap with Norm. This required five days of full crew rehearsal. We filmed the prologue scenes in three days, and filmed the continuous action sequence once a day over five days.

It was incredibly challenging but given the immense amount of thought that went into prep, it all came together with the support of our deeply committed cast and crew.

Kathleen: Another unique challenge that came up for us in shooting this way, because we had put so much into our rehearsal period, it became almost too well choreographed, so the challenge for Norm in operating the camera and for the actors was to find ways to still surprise each other enough to keep the feeling of spontaneity. So it was a real balancing act between consistency and impulsivity. 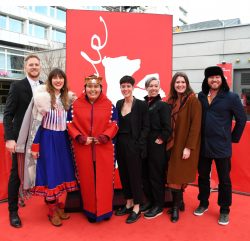 How did you develop the relationship between the characters? I loved the scene, for example, when the two women are pretending to be sisters for the cab driver on the way to the shelter. There is so much anger and sadness and subtext in this scene. Was any of that dialogue improv or was that scripted?

Kathleen: The cab scenes were probably the most challenging scenes to predict simply because we had no lock downs on the streets so the rides could range from five to eight minutes on any given day, which really alters the timing of the actors delivery. That being said, the tension of this unpredictability heightened the scene in some way.

There was a bit of improv from the cast here, but most of it was true to script. The challenge was in finding the right moment for Rosie to unveil a little bit more of her personality throughout the film, which she only does when she has a good reason to. In this scene, she’s playing with the driver’s possible assumptions while trying to keep Áila’s attention, which she’s beginning to enjoy. It’s a moment where she’s found a way to take control. In writing this film control, and how control shifted between the two was crucial, so in developing the arc of their relationship we were always asking ourselves: who has the power in this moment and why? Which seems obvious but can be quite subtle and complex.

Why was it important to the story for both of these characters to be Indigenous women existing in different worlds?

Elle-Máijá: The encounter with this young woman that day was a direct confrontation of my own privilege. She was 18 and visibly Indigenous, working class, and had a very different home life from mine. I’m ethnically ambiguous, middle-class, university educated, have never experienced intimate partner violence, nor did I ever see it at home with my parents. Despite the fact that we are both Indigenous and carry the weight of this colonial legacy, our lives are worlds apart. My desire to help was also fueled by this naive notion that I knew what was best for this young woman, when really I lacked the experience or knowledge to handle the situation. So, much like the relationship between myself and this young woman who I encountered that day, we were compelled to explore the intersections of these relative forms of privilege. This is also a distinctly urban Indigenous story and with that come additional layers of isolation and displacement and the need or desire to build relationships within the diaspora.

I think the ending of this film was particularly poignant—in a way, it’s not an ending. Can you talk about your decision around the ending?

Elle-Máijá: Without giving too much away, we chose this ending because this is what happened in the real life version of the story. That experience and the further research we did during the writing process, led us to understand that it’s never as easy as just leaving. When looking in from the outside at these sort of situations, people often ask, “Why doesn’t she just leave?” and we wanted to address that with the very clear reality which is that it’s often not that simple. A recent UN report stated that over 50% of women who are murdered are murdered by an intimate partner or family member and 70% of women who are murdered by an intimate partner are murdered after they leave. Meaning, that the decision to leave can often be a life or death situation. We also felt that it was important not to stray from the original intention of offering a story of a very intense encounter between two strangers over a couple of hours and not provide a tidy ending.

Kathleen: We also wanted to leave the audience feeling the beauty of this connection and the idea that their stories continue beyond the timeframe of the film. As Cat from the safe house says: it’s a start.

Can you talk about co-directing—how does that work exactly—do you split up roles, etc?

Elle-Máijá: Having directed mostly documentary, I knew that collaborating with a writer and director with more narrative experience would only serve to strengthen the film. Kathleen has been a friend for years and I have a deep respect and admiration for her work and I consider her to be a thoughtful ally who I felt I could trust in this challenging work. I also firmly believe that women can accomplish great things when we work together. We collaborated to the fullest and made every decision together. It wasn’t without its challenges but it was an incredibly enriching experience.

Kathleen: I was incredibly honoured that Elle-Máijá would ask me to be a part of this film, and came on board understanding that this was a story that required us to work with careful and precise attention to achieve something that could do justice to the subject and community we were representing. We moved through the process organically, and as Elle-Máijá said, it wasn’t always easy but it was incredibly rewarding and I learned so much both from Elle-Máijá and Violet as well as from the Indigenous youth we employed on this film. We didn’t divide roles, aside of course for acting, we just worked though everything together as it arose, from script to post. Since neither of us had ever executed a film in this way (in real time) every day was a new challenge. It was a wildly different method in many ways but kind of exhilarating as a result.

How were you able to fund your film?

Elle-Máijá: We received funding from the Harold Greenberg Fund, Telefilm Canada, CBC, Creative BC (in the form of tax credits), Telus Storyhive (for the Indigenous Youth Mentorship Project), and Women In Film Finishing Fund. I am also Sámi and have a Norwegian passport so we decided to reach out for support from the International Sámi Film Institute which led to the idea of pursuing a co-pro with Norway. Once we found our Norwegian producers, we secured funding through the Norwegian Film Institute. We also received support through the Sundance Film Institute’s Merata Mita Fellowship and through a private American equity investor called the Lagralane Group.

We were both conventional and creative in our strategies and also feel that this film happened at a really important time in which the broader film community and funding bodies are recognizing the value in supporting Indigenous film and films made by women.

How did you feel about your experience with the film at Berlinale?

Elle-Máijá: It was an honor to screen at Berlinale and also to be included in such a vibrant and vital section as the Generation Program. We were very curious to know how our film would translate with an international audience and discovered right away that the universal elements of this story resonate with audiences with sometimes little to no understanding of the realities of Indigenous people in Canada. At its core, this film touches on themes of motherhood, sovereignty of the body, and the ways in which women experience and respond to violence in all its forms. We were blown away by the large audiences and were humbled by the engaging Q&A’s following all four screenings.