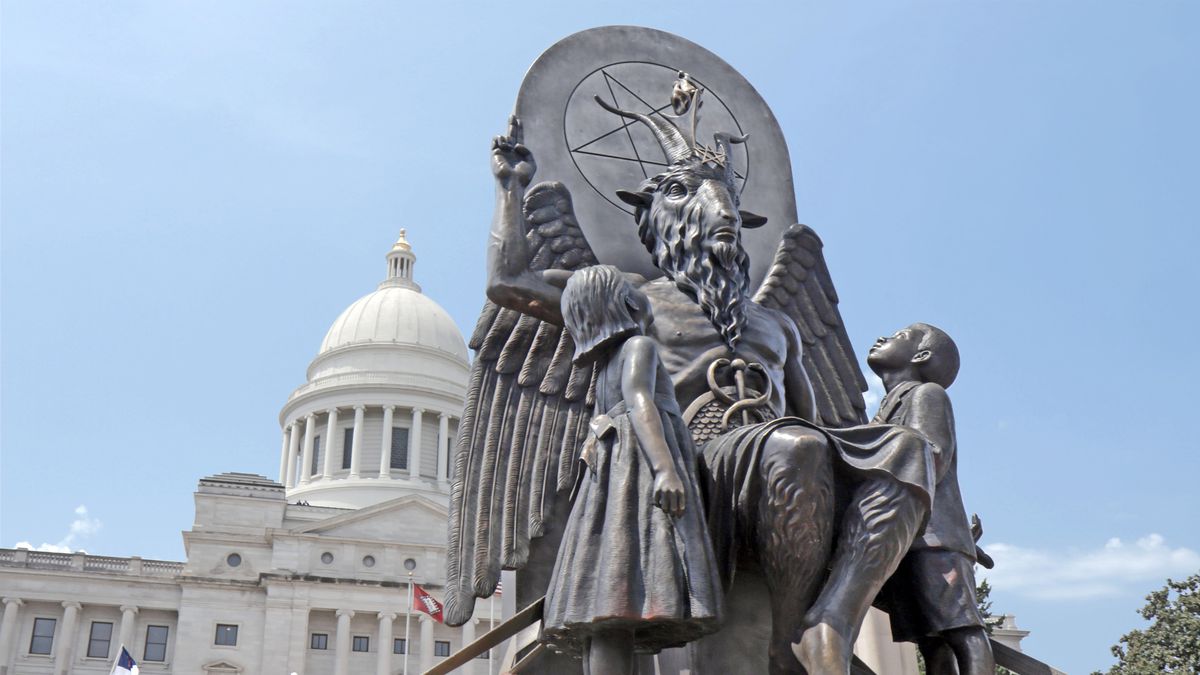 The Boston Underground Film Festival (BUFF), the festival that boasts “Cutting-edge films—and films with a cutting edge,” celebrated 21 years this year, by continuing its rich tradition of delivering the some of the most unique underground films from all over the world to Boston cinephiles.

Taking place over five jam-packed days at the Brattle Theatre from March 20-24, BUFF once again assembled a diverse lineup of genre-spanning narrative and documentary films, many of which this critic was fortunate enough to consume. The following collection of reviews is a smattering of some of the best new release films screened at the festival.

Hail Satan? isn’t just a goofy title meant to evoke the comic uncertainty of someone flummoxed like Ron Burgundy; it’s an actual question that Penny Lane’s uproarious and informative documentary asks and answers. Lane’s question isn’t whether to worship Satan, but whether we should support The Satanic Temple in their fight for religious freedom in the United States. Her reply is a resounding, “Yes!” Through hilarious interviews, Lane’s zippy film deftly traces the origins of this modern organization by laying the historical groundwork for its formation, mainly as a counterpoint to an unconstitutional government preference for Christianity that has gained momentum over the past 70 years in the U.S. As she explains, The Satanic Temple, based in Salem Massachusetts and helmed by its delightfully mischievous founder Lucien Greaves, doesn’t preach worshipping Satan and they don’t advocate for violence, death, chaos, or destruction. For them Satan is a symbol of rebellion against authority and an icon “who questions sacred laws and rejects all tyrannical impositions.” Guided by a set of seven brilliant tenets, they exist to troll the status quo by fighting for secularism and pluralism, but also to provide a place of belonging for outcasts who feel unaccepted by mainstream society and reject traditional religion. What emerges from Lane’s film is a compelling portrait of an activist organization with a wicked sense of humor and diverse membership (like the “zesty” bow-tie-and-suit-wearing Southerner) engaged in a noble legal battle against authority for liberty and justice for us all. Hail Satan? Yes, please! 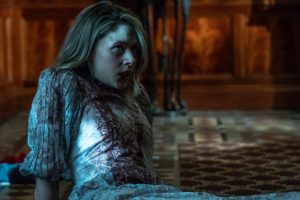 Amanda Crew fights for her life in Tone-Deaf.

Richard Bates Jr.’s Tone-Deaf had the most clever title at BUFF this year. Its entertaining double entendre is both a reference to its protagonist’s poor musical skills and its villain’s unawareness of his outdated political views. In this comedic horror thriller, Olive (Amanda Crew of Silicon Valley) is a struggling Millennial who attempts to clear her head by renting a house in the country owned by Baby Boomer Harvey (Robert Patrick). Their generational labels are key to the equation because they help frame both the moral and physical battle that ensues after Harvey is “triggered” by Olive and decides to kill her. Richard Bates Jr.’s use of their fight as a metaphor for the ethical and political war occurring between Millennials and Boomers in the U.S. is whip smart, and his ability to mine this conflict for comedy is impressive. Not only is the picture tense and freaky with some drawn-out maneuvers by Harvey that pay off in unexpected ways, but it’s comically crass too. Amanda Crew is fantastic as the rebellious heroine, as is her commune-dwelling hippie mother played by Kim Delaney, although the film’s greatest strength is Robert Patrick, who inhabits Harvey with the greatest of gusto. Patrick has several scenes where his character breaks the fourth wall, speaking derisively to the Millennial audience in rants about the good-old-days, an approach which could have been disastrous in another actor’s hands. Instead Patrick nails those moments with his gravelly tirades, making Harvey the perfect villain. When all is said and done, it’s not surprising who emerges victorious in this throwdown between Olive and Harvey, however that doesn’t make the film’s resolution any less satisfying. Tone-Deaf’s ending is certainly anything but. 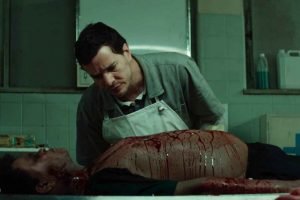 Daniel de Oliveira surveys a corpse in The Nightshifter.

If corpses could talk, what would they say? The answer is something that graveyard shift morgue attendant Stênio (Daniel de Oliveira) understands all too well in Dennison Ramalho’s horror film The Nightshifter. Stênio communicates with the dead while he cleans them, often informing them of their unfortunate demise, hearing their final confessions, and in rare cases, reaching out to their loved ones let them know what happened. Understandably, his job and its hours put a strain on his home life, but he reluctantly accepts his station—until a corpse lands on his table with key information about someone he loves. Desperate to make a change, Stênio selfishly uses this intelligence to his advantage, which unleashes violent hauntings upon his family. Prior to the hauntings themselves it’s important to mention that the special effects in the film are topnotch, particularly the unsettling animations used to make the corpses faces come alive as they talk to Stênio. The ensuing torment inflicted upon him for violating the dead’s trust is also supremely creepy and twisted with terrifying moments that effectively mine his job for scares. If the film has any flaw, it’s that its scary moments are too far apart, which accentuates the picture’s sleepy pacing and prevents it from establishing a compelling rhythm. When it arrives at its epic showdown, the conflict itself is engrossing down to the film’s final shot, however The Nightshifter would have been more lively if the whole thing demanded the viewer’s attention in the same way individual moments do. 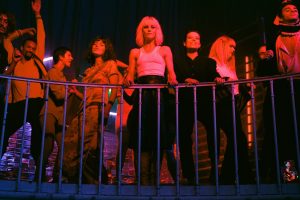 For a Giallo-inspired Parisian horror film about a masked killer murdering male erotic film stars in 1970s, Yann Gonzalez’s Knife+Heart is appropriately atmospheric. Gonzalez establishes the perfect slick ‘70s vibe through his use of lush color palettes and charged electronic music by his former band M83. The combination of these elements with hyper-stylized violence create an atmosphere so thick and rich, it could be cut with, well, a knife. The movie centers on Anne (Vanessa Paradis) a filmmaker and purveyor of blue films, whose actors start turning up dead. Part slasher, part murder mystery, and part tragic love story, Knife+Heart follows Anne’s desperate attempt to save her failing relationship with her editor Lois (Kate Moran) and her quest to find the killer before her friends end up dead. The film’s kills are entertainingly drawn out and memorable for their gruesome nature, but they also look incredible. What prevents the movie from being a total success however, is that the murders themselves are spaced too far apart, and the plot revolves too much around Anne’s somber solo trip to the French countryside to learn the killer’s identity. These issues throw off the film’s rhythm, preventing it from gaining the momentum necessary for its tense resolution inside—you guessed it—a movie theater. The finale itself worth the wait for its suitably violent conclusion, but the extended dream sequence that follows just feels superfluous. Knife+Heart is the kind of movie that doesn’t understand when to call it quits, which is unfortunate because it’s sharp and vital most its runtime. 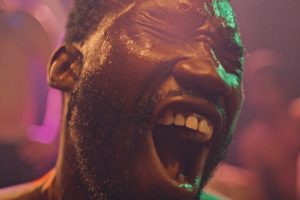 Nathan Stewart-Jarrett gives it his all in Mope.

Simply put, Mope is a disgusting film. Lucas Heyne’s narrative about the unbelievable true story of two men (Nathan Stewart-Jarrett and Kelly Sry), who were willing to do anything to make it in the porn industry, feels just as filthy to watch as it sounds; the kind of movie that leaves the viewer craving a shower afterward. What makes it so gross is that it’s true, which requires viewers to imagine real people living in the nasty conditions depicted in the film, subjecting themselves to the horrendous treatment they endured just for the misogynist glory of a career in porn. As repulsive as the subject matter is however, the story itself is bizarrely captivating. Part of that is due to the fact that the entire scenario seems so completely implausible, it keeps audiences glued to the screen just to see how it all gets resolved. Another part of that is driven by the can’t-look-away atmosphere that Heyne creates with his music selection and his sets. What really brings it all together though, is the absorbing performances of its leads—which shine a spotlight on the characters’ astounding delusions of grandeur and their inability to understand just how attainable their dreams are. Watching that realization come to a head is like bearing witness to one of the most harrowing slow motion train wrecks committed to celluloid, a train wreck so haunting and bloody viewers will feel dirty just by association. 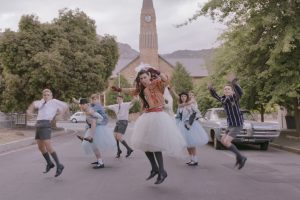 Tone-Deaf may have had the most clever title at BUFF, but Christiaan Olwagen’s Kanarie certainly had the most unique premise: a coming-of-age war musical. Set in 1980s South Africa at the peak of the Apartheid regime, Olwagen’s moving film concentrates on Johan (Schalk Bezuidenhout), a young man from a small town who is conscripted to military service and joins the South African Defence Force Choir and Concert group known as the “Canaries.” Led by priests, this unit must straddle the impossible line between religious ambassador and ambassador for the military, as it travels around South Africa, performing during a border war. What makes this mission all the more complicated for Johan is that he is closeted, grappling with his sexuality, trying to reconcile it with his strict religious upbringing. As if his life wasn’t already a pressure cooker, he also falls in love with one of his fellow Canaries, who much to Johan’s dismay, doesn’t want to stay in the closet. This poignant Afrikaans and English drama is elevated by beautifully choreographed song and dance numbers that pay homage to ‘80s pop music with references to giants of the era like Michael Jackson, Prince, and David Bowie, but it also gives more personal nods to Johan’s favorite bands like Culture Club and Depeche Mode. Boy George in particular serves as Johan’s personal hero, a memorable ideal of what he wishes he could be and an example he hopes to emulate once he can free himself from the bonds of his situation. Kanarie’s emotionally moving and meaningful commentary on war, religion, and sexuality during the ‘80s becomes even more impactful due to some of the smart artistic choices Olwagen makes, such the effect of actors frozen in motion like they’re in still photos. This particular effect when used to demonstrate the terrors of war and racism sears the disturbing imagery into the viewer’s brain, creating a haunting slideshow of that keeps playing long after the Canaries have stopped singing.