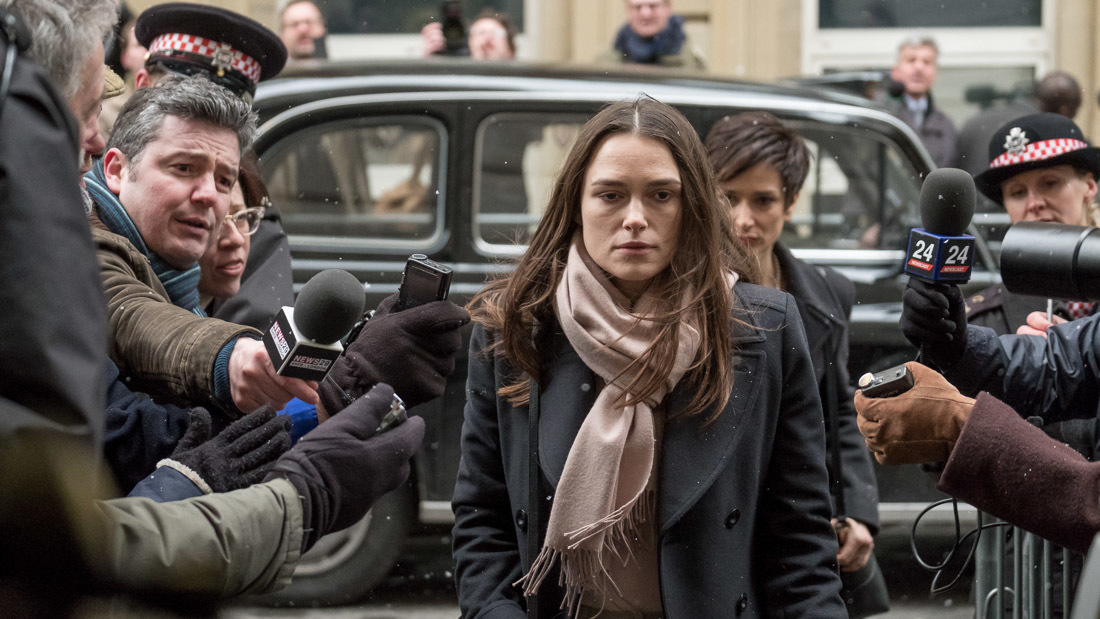 What does loyalty mean when someone must choose between their job, their country, and their marriage? Gavin Hood’s film Official Secrets, explores this treacherous question in nerve-wracking depth.

The film tells the true story of Katharine Gun (Keira Knightley), a British government employee that gave information to the media about a secret NSA plot in 2003 to blackmail members of the UN Security Council, in the hopes that it would prevent the Iraq War. Hood’s narrative follows Gun’s discovery of the memo through her agonizing decision to disclose it to the media. It then traces the journey of journalist Martin Bright (Matt Smith) after he receives the memo and attempts to verify its authenticity, before deciding with his colleagues at The Observer whether the information’s public good outweighs violating Britain’s Official Secrets Act by publishing it. Once the memo is published, Katharine remorsefully confesses to her crime, triggering the intense legal consequences that come from exposing government secrets.

The Independent’s Evan Crean sat down with writer/director Gavin Hood and the journalist Martin Bright for an engaging conversation about the rich themes of loyalty, law, and journalism, and how they’re reflected in the picture, which opens on September 6 in Boston, MA.

Evan Crean: Gavin, how did you get attached to this project?

Gavin Hood: I had made a film called Eye in the Sky, with a lovely producer called Ged Doherty. One day he called me, and said, “Have you ever heard of Katharine Gun?” I felt like maybe I should have, but I hadn’t. He said, “Just go and Google her, because I think there’s an incredibly interesting story, and I’m trying to acquire the rights.” Long story short, I went to London. I met with Katharine, spoke to her for five days, for five or six hours a day. Met Martin, spent a lot of time with him. He basically helped me interview and meet with all the key players. After two weeks of taking notes, I said to Ged, “You know what? I think we do have a story.” Is it Katharine’s story only? If you do that, you lose out on the great newsroom stuff. But is it Martin’s story only? Well, then you lose out on Katharine, and … Eventually I said, “Look. I think this material is so rich, it’s a piece of history that hasn’t been dealt with in terms of the history of the Iraq war. Let’s just follow the memo.”

It’s a rich story that really focuses on quite an ordinary person. It’s a story about someone who could have been you at work, who is sent a memo that asks her to do something within her organization that just isn’t kosher. There’s an incredible bravery to Katharine acting on her conscience, and… Risking not only losing her job, but her freedom too. I thought that was interesting, because it was a story that would ask the audience the question, “What would you do if something like this happened to you?” 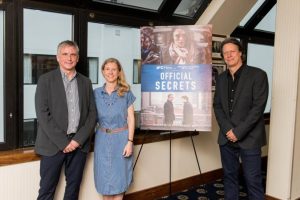 EC: Martin, was it weird that somebody came to you and said, “I want to make a movie about this story. I want you to be a fixture in this?”

Martin Bright: Yeah. I mean, it’s unimaginably strange, okay? I can’t pretend it’s anything other than that, strange but flattering. I have to say that it had been a long time in the making, right? Long before Gavin came on board. I’m grateful to everyone and every iteration of this film. What was different about when Gavin came on board is that there was a kind of fierce determination to make the story accurate. From a journalistic point of view, that was hugely important to me. Not at the expense of telling a great story, but for me, if we were going to find ourselves ultimately in this situation where we’re having to justify what’s been put on screen. I can happily stand behind this film now, and say, “It all happened, and it all happened pretty much as shown on the screen.” It’s hugely important.

GH: Thank you, my friend. That’s largely because I could not have made this film without the detail that he provided me. There’s some times where I think, “Well, I shouldn’t even have a right or credit to that moment, because really, it was his notes.”

EC: I studied journalism in college and I loved seeing the journalistic process. Where we are in terms of criticism of the media, it’s really important to show the scenes where you guys do your due diligence to figure out, is this memo legitimate? Creatively, did you go through that same rigorous process?

MB: Yeah, that was the process. It was very important for me as well to show that this was a collaborative process, and a very widely collaborative process as well. I mean, we did work as a team, the three of us. It was very important to recognize the various skills that we had. But I do think as well that it’s no coincidence that there have been other films recently about those last great days of print journalism. I think there’s a justifiable nostalgia and sentimentality about newsroom work.

EC: Definitely. Gavin, I read that before you were a filmmaker, you were a lawyer. Did that experience shape your perspective with the legal elements in the film?

GH: Very much so. When I met with Ben Emmerson, played by Ralph Fiennes, it was an intimidating moment because Ben is one of the great legal minds. In the field of human rights, he’s a giant. Not having practiced law for many, many years, I had to keep up. He’s a force of nature, and you need to keep up, and he’s not going to suffer fools gladly. “When I’m telling you what the defense of necessity is … You know what it is, Gavin?” It’s not the same as self-defense? Yes, Ben, just back up, Ben. You’re telling me about the different ways to justify war in terms of …?”

I loved all the subjects that don’t help you earn a living in law. I loved jurisprudence and legal philosophy, and yes, I thoroughly enjoyed the moral dilemmas and ethical dilemmas surrounding criminal law. I fell asleep in tax law class, and law of corporations and insolvencies, so don’t ask me to help you in any of those fields. But I do think that I’m drawn to these kinds of stories because whatever you experienced in life stays with you. I think I’m drawn to these sorts of stories partly because of their spirit. 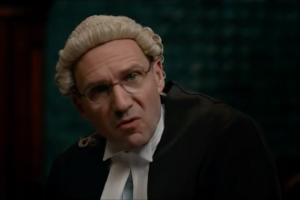 GH: Well, they might find this defense of necessity very interesting, because usually the defense of necessity is … It’s typically used when the surgeon is racing to the hospital and gets a traffic fine. He goes, “Yes, I know. I’m guilty of speeding, but I had a higher purpose to save life, so that’s my defense.” It’s not usually used to sort of negate an entire war. It’s pretty innovative what he did with that defense. It had never been used in the context of the Official Secrets Act before, and the truth is it’s actually never been used, because they dropped the case. So if Ben has a frustration, it’s that he didn’t get his day in court as a lawyer. He said to me at one point, “They were shutting the case down, and I knew I wanted just one thing on the record. I stood up, and said, I’m paraphrasing now, “My client is entitled to know why this case is being dropped. Indeed, the public is entitled to know.”

MB: This is an unusual film in several ways, not least because it is, on the one hand, a great story, I think a fine work of art that Gavin has produced. As an individual, you identify with Katharine. It is also a work of journalism, an ongoing work of journalism because there are still some unanswered questions about this case. Was it the case that the British government, or the GCHQ, simply automatically followed American instructions? Or was it authorized by someone higher, within the British government? If so, who? Then, in terms of the final chapter of the film, where the case is dropped, why? Are you saying that Katharine was right to leave the documents? Was it right to try and stop a war? This is an ongoing process, and this is not over yet.

EC: Do any of those kind of lingering questions drive you crazy? What do you feel like you’ve dealt with through the film?

MB: These kinds of questions do nibble away at you. You have to let them go, because it’s not the only story I’ve done where things are not resolved. You don’t win every battle.

GH: That was one of five stories you were dealing with that week –

MB: It was one of four or five stories I was doing that week, not just about the war. It’s been a fascinating process. I just hope it’s inspiring to a new generation of journalists, because they are the ones that are going to have to hold present government to account. I think things are even more difficult now, potentially, because at least in the Bush/Blair era, there was an understanding of the difference between sort of truth, lies, and propaganda. I’m not so sure that in present day America that’s quite so clear, right? 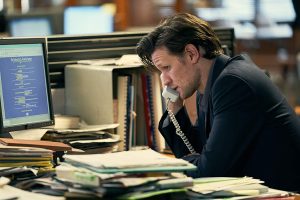 EC: No, it is not. That is very scary. Ralph Fiennes has a brilliant line in the film where he says to Keira Knightley, something to the effect of, “This was a no win situation for you. You basically had to choose between loyalty to yourself, your country, and your government, and you picked your country.”

GH: I do like that moment. You’re always, as a filmmaker, asking what’s the real theme? What am I really exploring here? The theme that struck me quite early on. I remember going, “Ah, the theme is loyalty. That’s broad. The questions are, is it possible to be loyal to your conscience, your marriage, your government, and your country? So loyalty is not a simple theme. Sometimes you have to choose loyalty to conscience at the risk of your marriage. When you break it down, she was disloyal to her marriage. She was disloyal to her government, but she was loyal to her conscience and to her country. I think the theme of loyalty kind of hooked me in.

EC: It’s a theme that really resonates. All the characters in the film seem to be intimately familiar with the Official Secrets Act. Do all journalists know it, Martin?

MB: As journalists, you are. I feel quite keenly aware of it. It’s worth explaining, I suppose, within English law. This is a hugely brutal piece of legislation. We don’t have a, sort of, first level of protection in the same way they do in the States anyway, but also there is an instinct to secrecy in the UK. In a sense, it has the same resonance as the First Amendment in that every American citizen will be aware of the First Amendment. You might not entirely know what it means, but everybody knows about it, right. In Britain, everybody knows about the Official Secrets Act. Also, it’s expressive of a British instinct for secrecy. Whereas in other countries, you have to prove why something should be kept secret, in Britain, the cultural assumption is that things will be secret unless they’re proved it’s necessary to reveal them.

EC: Thank you for explaining that, it really helps to understand why this law is so tough to navigate in the UK.