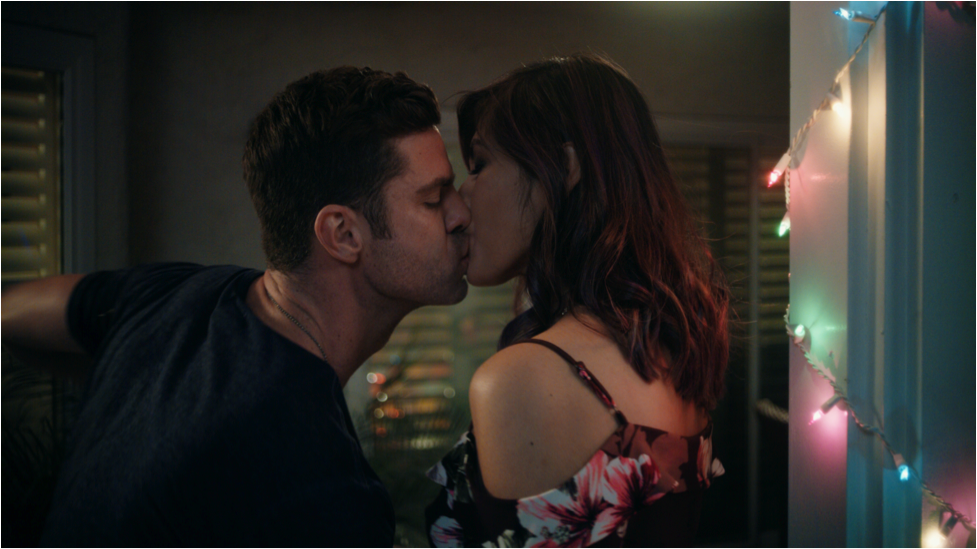 The US is not shy to acknowledge its long binging habits, boasting some of the highest consumption rates of digital media within the world. With such notorious patterns, it should come to no surprise that the media has been attributed to teaching us how to interact with and understand reality. The media invites us to learn about normative facial expressions, nonverbal biases, and specific body language as we watch characters interact with one another. These lessons slip into our unconscious and are slowly internalized as how we should interact with those around us. When audience members lack personal relationships with people marginalized by society, they often utilize what they have internalized as a means to communicate, instinctually falling back on the harmful stereotypes. Visibility is a double-edged sword when marginalized communities are shown, it is often through harmful stereotypes, but when they erased from the very reality being presented, their existence in our world is questioned. I spoke with Rain Valdez, creator of Razor Tongue, to understand the impact media representation has had on transgender women of color but specifically to address their absence from an entire genre of media – romantic comedies.

Razor Tongue (2019—), is an indie episodic romantic comedy not for the faint of heart. Razor Tongue entices audience members with its rapid-fire delivery, providing a buoyant, witty, comical reality, topped with a healthy dose of drama within its seven episodes. Razor Tongue follows Belle (Rain Valdez) as she encounters and interacts with various men. Belle prioritizes her values, happiness, and her voice rather than appeasing the men in her life; therefore, Belle enthusiastically calls out and exposes their toxic behavior as she is faced with it. As Belle’s reputation and notorious behavior gain traction, she meets Ariel (Alexandra Grey), the producer of hit new radio show Razor Tongue, a radio station actively seeking a new voice of the people. All the while, Belle falls for Austin (Sterling Jones), a self-assured yet humbly flawed cis white man. Sparks fly as their mind-boggling love story takes the wheel.

Razor Tongue, staring in and written by Valdez, provides the long-awaited authenticity needed in the media’s depiction of transgender women of color and further utilizes one of these very characters to be at the center of affection. Valdez produced Razor Tongue through her production company, one that never hesitates to assert their dismantling of normative media, Now>Ever. Upon my first watching of Razor Tongue, I quickly fell head-over-heels for the carefully crafted dialogue amongst the characters. The script is pivotal as it embodies the radical change needed within this genre: women do not have to play the damsel in distress, women can embrace their vulnerabilities and find the strength within themselves. Belle is intelligent, desirable, and lovable, not to mention Belle sports a complicated life that goes beyond her gender identity. Valdez emphasizes the importance of creating engaging and believable characters as the depiction of characters within romantic comedies are often seen as propaganda for who gets to be loved. 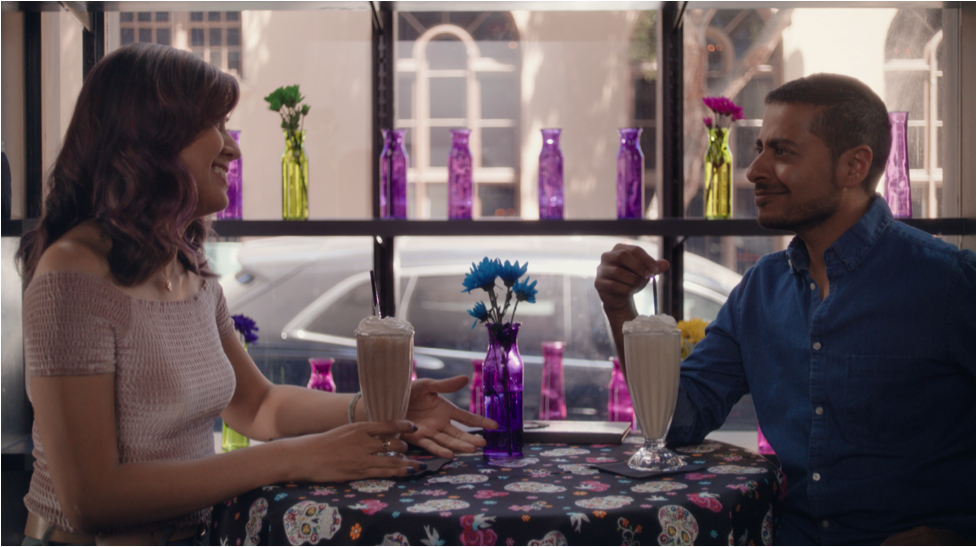 Valdez had a childhood that was jam-packed with romantic comedies, an undeniable favorite genre, which she attributes to her inspiration in creating the new standard for this genre. As transgender women people are widely absent from this genre, Valdez never saw herself reflected within these films. The absence of transgender characters falling in love on screen is no doubt disheartening, as Valdez lets out, “We deserve love too!” and goes on to explain that on the rare occasion that trans women are involved in romantic storylines, they are often heavily stigmatized or fetishized. As an Asian American transgender woman, Valdez was particularly motivated to create a world inhabited by characters that she would have been happy seeing as a young girl, to see that her life could be filled with longevity and love.

Valdez was inspired by classic situations that characters within romantic comedies find themselves in, such as having a negative first date or falling in love with one’s arch-nemesis, but Valdez reframed the status quo. Valdez vowed that Belle would maintain her fearlessness throughout the series, despite the various situations she is seen in. Razor Tongue, like other rom coms before it, offers an overarching message of self-love; however, what makes Razor Tongue different is that Valdez presents Belle as creating her own definition of self-love. Belle’s self-love is increased as she fights off demeaning and bigoted comments, increasing her strength and desirability. Razor Tongue further serves as a how-to-guide when presenting the various situations Belle finds herself in, specifically with regards to her relationship with Austin. Belle and Austin are never shown discussing Belle’s trans identity, as her beauty surpasses her gender identity; therefore, Belle and Austin are simply presented as two people who are attracted to one another, regardless of either of their gender identities.

Similarly, Valdez does not introduce Belle as a trans character within the first episode, as Belle’s storyline does not revolve around her transness. As a woman of color, Valdez has become well versed in the fetishization of her and other women’s bodies. Valdez utilizes the script as a means to address this, too, as the audience watches along with a cringy blind date between Belle and Timmy (Shaan Dasani). One of the first questions Timmy asks Belle, although she is unable to get a word in edgewise, is where she is from. He smiles and says, “I bet you’re from some place exotic,” and insists he will be able to guess her ethnicity by listing off various countries. This scene is drawn from Valdez’s real experiences, as she informs me that an inescapable narrative of her life has involved the exoticization of women of color. Valdez further explains that the lack of Asian American representation within the media, she has witnessed people struggling to place her ethnicity.

While Valdez does not identify as a particularly political person, she does acknowledge her commitment to intentionally providing herself with the opportunities needed to create her stories and increase the visibility from within her communities. Razor Tongue Valdez explains, is space in which she can practice her activism. Valdez, alongside Belle, has learned it is okay to take up space in which she is free to feel and express her rage due to the extensive history of oppression, misrepresentation, and silencing of transgender individuals and knowing that she has an inherent value to the world. It soon became apparent that as a creator, Valdez would turn to art as a means to relieve her tension and would provide an outlet for her rage. Valdez can authentically express herself through the characters and the situations they are placed in, as Belle represents the times when Valdez has spoken up, taken a stand, and serves as a constant reminder that she doesn’t have to endure toxic behavior. While Razor Tongue provides a platform for calling out negative behavior, it has also presented space in which cis women can begin to draw parallels of their lived experience to that of trans women. To encourage this dialogue and reflection, Valdez intentionally placed Razor Tongue in our world, a world filled with microaggressions, racism, and misogyny, and undeniably revolutionary concept. 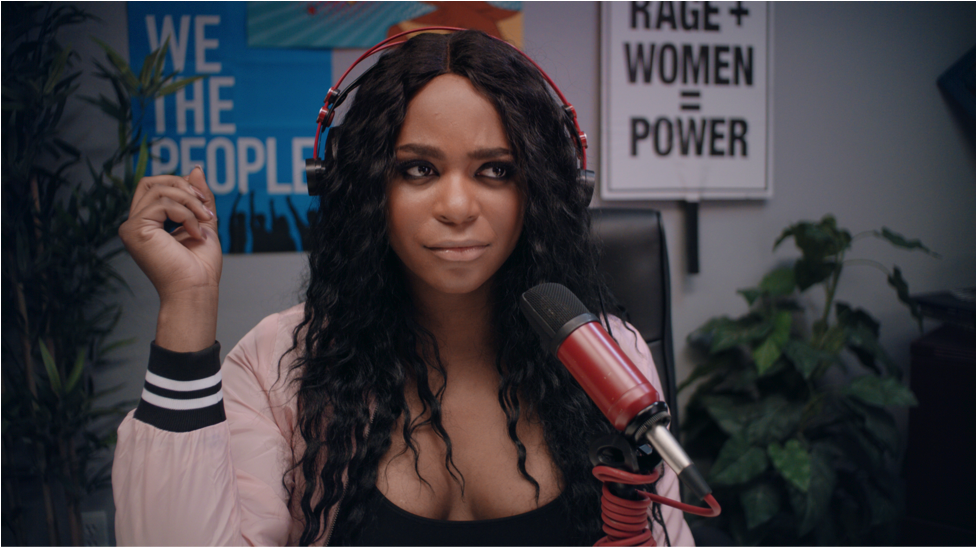 The revolutionary acts that make up Razor Tongue go beyond pulling toxic behavior to shreds by the second season. I had the unique opportunity to read the script for the second season and am happy that bigger and better things are coming to Belle. Aside from moving the plot forward, Valdez acknowledges she is equally, if not more, dedicated to finishing this project due to her previous experience that people like her don’t often get a second chance within the industry. The casting for the second season has also expanded, as Valdez announced to me that Alexandra Billings (Transparent) and Jamie Clayton (Sense8, The L Word: Generation Q) have signed on for the second season and will be playing pivotal roles. Valdez had set her intentions on making Razor Tongue into a series with a steady progression of each character’s storyline, gaining strength. I noticed a big leap in character development and overall growth from season one to season two. The characters return as more consciously aware of their settings, as well as themselves, and how this awareness plays a role as they navigate through the world.

The characters, specifically Timmy and Austin, gain depth as their worlds are exposed and let out to dry, though some merit points are earned here and there. Valdez has utilized this season as a means to provide more profound education to the audience, bringing more politically charged scenes to life, and providing each character time to expose their complexity to feel their experiences. One scene in particular that sticks out to me is a conversation between Timmy and Belle in which Timmy asks Belle what he should expect from “the situation.” The situation is soon revealed to be Timmy hinting at needing to know what to expect upon his first time sleeping with a trans woman. The two go back and forth until Belle expresses that she exhausted by the constant need to defend and explain herself regarding something she does or doesn’t have – though Timmy persists his question is innocent, Belle puts an end to the conversation as they are far too exhausting.

After watching the first season of Razor Tongue, speaking with Valdez, and reading the second script – I quickly understood Valdez’s inclination to improve the romantic comedy genre, a genre I am not very invested in, as it pertains to validating the lives of transgender people. Valdez and I speak about the representation that does currently exist, such as filming our lives through the lens of constant tragedy: we are often seen as financially unstable, little to no access to necessities, and need drugs to scrape by. While this may be the narrative of some transgender people, Valdez informs me that some of the funniest people she has ever met are trans. We have to provide a rounded image of transgender people; yes, transgender people will experience sadness, but there are also moments of undeniable joy, and this is as important of representation to show to people looking for their glimpse of longevity. This innate resilience stems from sifting through life to discover the joys and community that makes us proud, this is a major theme of the second season. Many transgender people take to comedy as a means to reclaim a narrative that has been overused. Razor Tongue, in particular, has proven that our lives are not niche but are filled with universality and beauty. As Valdez navigates through the industry as an out trans woman, she has come to find that many believe that her existence is purely revolutionary. Valdez is happy to say that being transgender is the least exciting part of her life. She hopes that her courage in being visible and actively owning her talent becomes recognized as her revolutionary act. Valdez has managed to gracefully place herself within the storyline of Razor Tongue to relieve herself of the prejudices she faces, in a successful attempt to educate the masses, in a funny, relatable, and palatable way. Valdez has furthered the once limiting world of romantic comedies and has set the bar for those who will follow.