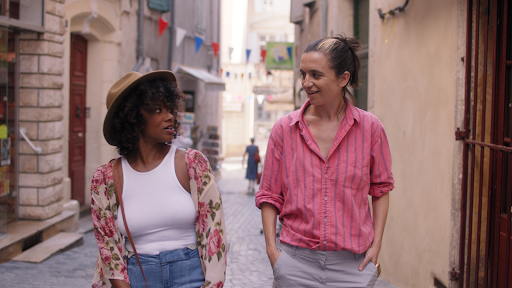 An Ode to a Nuanced Existence

The Sundance “Next” selection is always something to look forward to. As the name implies, these are the films that have been chosen due to their forward-thinking, boundary pushing, and are always refreshingly innovative. This selection often represents what I can look forward to as the blueprint for the future of storytelling.

Ma Belle, My Beauty is just that. Written and directed by Marion Hill, who uses they/them pronouns, (Goddess House, Bird of Prey, In Still) starring Hannah Pepper, Idella Johnson (Blood Runs Down, One of These Days, Win by Two), Lucien Guignard (Je Suis Ce Que Tu Voulais, Jasper) and Sivan Noam Shimon (Sahara, Wild Animals, Blush). Ma Belle, My Beauty is Hill’s first feature film, which Hill humbly describes as a contemporary love story. This film far surpassed what I originally envisioned when presented with the phrase “love story,” as this film invites the audience to view a relationship in its entirety, without holding back. We watch as life waxes and wanes over the couple, as the nuances and complexities test the relationship’s foundation. 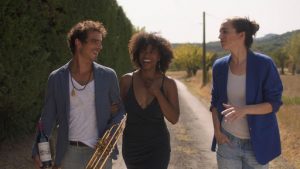 The film opens with the newlywed couple navigating their new life together. Bertie (played by Johnson) is grieving her mother, adjusting to her new life as a musician with a dwindling desire to create, and adapting to a completely new cultural environment in the south of France, as it appears, she is the only Black woman in her town. Fred (Lucien Guignard) notices that something is off; he has never seen Bertie like this before, so he decides to invite Lane (Hannah Pepper) to the house. Upon Lane’s arrival, we learn that the three used to be in a polyamorous relationship. The film continues to examine the intricacies of attraction as we learn that Lane has continued to love Bertie despite spending years apart.

I was lucky enough to speak with Hill, Pepper, and Johnson regarding their work on Ma Belle, My Beauty to find out just how deep they all went inside of themselves to bring this story to life. The cast and crew all live in New Orleans. Many involved are personal friends of Hill, providing an opportunity for them to all come together, fine-tune the details of the characters and the world around them, and create close bonds with one another. Hill, Pepper, and Johnson all spoke at length about what kind of queers they are, what their backgrounds are like, and what kind of relationships they have been in to build off of these experiences and put into their characters to truly create an authentic sense within each relationship.

Pepper smiles, explaining that on one such occasion, the cast and crew went on a mini-retreat to a spooky farmhouse that brought everyone closer, in particular, Johnson and Pepper. Pepper reflects saying, “I felt that Idella and I had each other and that was powerful.” Johnson further explains that because of the initial time spent together, arriving in France didn’t feel foreign at all; rather it was like everyone was at home with their family and only had to bring themselves. Once on location, the cast and crew lived in the home where the film was shot, as well as three of the neighboring houses on the property. Pepper describes that everyone woke up together, had breakfast, lunch, and dinner together, and slept in the same place. They added that this is counter to most experiences actors have when working on a film since there was no need to transition from home life to set life every morning. This, “beautiful bubble where everything was the world of the film,” Pepper says, allowed for everyone to give their all to the film. 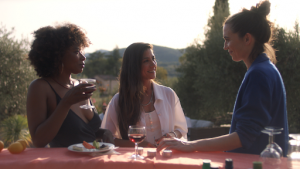 For Hill, Ma Belle, My Beauty is an extremely personal story. Hill’s childhood was spent in a small majority-white town in the south of France. The impact of this can be seen in Bertie’s character as she navigates her new cultural surroundings. Hill further explains that they often write older characters who are in relationships that they can see themselves in, as a means to subconsciously look into their future. One of the highlights of the film was that no one came out. There was no discussion of polyamory and no one walked around on eggshells when around the couple; their relationship was never treated as a taboo subject. It just was.

I asked Hill about this and I learned that this was both unintentional and intentional. Hill expanded on this by stating that they had already come out and because this film projects into their future, there is no need for another explanation, or coming out again, since that is in the past. They continue to explain that the film begins with Hill down the road, or all of them down the road, not at the beginning. Starting a film this way feels as if we are finally in a place where films are growing and learning to share every facet of our stories, rather than returning to potentially traumatic events that are retold and force us to relive negative experiences. Hill recognizes that all too often women’s primary struggle in film is about their sexuality, or being stuck in the closet. This constricted narrative neglects women’s identity beyond relationships and the experiences they’ve had which inevitably inform their responses within those relationships. Ma Bell, My Beauty, alternatively, shares the complexities of people coming together and shows the work required to maintain a healthy relationship. The representation of non-traditional relationships showcases that there is just as much work required to have a healthy relationship in non-traditional relationships as with traditional relationships, putting to rest any negative speculations.

Hill allows characters and actors the creative liberty to decide the gender of their characters. This not only provides the actors a way to dig into the “galaxy of genders” in their minds, as Pepper calls it, but also is an opportunity for the actors to learn about themselves in the process. Johnson and Pepper both agree they were able to gain equally as much from their character as they developed them, whether it was a new perspective on their own lives or a mannerism they would like to incorporate into their real life. The freedom and fluidity that Hill allows the characters and actors alike should be the next step we all take in accepting those around us. The power to accept who you are, unconditionally, goes far beyond one’s imagination. Hill is always looking forward and as a result, has dropped the frozen-in-time scenario that dominates queer films. Our lives do not stop because we have come out. Hill has a full life ahead, beyond their gender and sexuality, as does everyone else.

As we come to a close, I recognize that all four of us have showcased the beauty in the nuance of existence that Hill so brilliantly captures in their films. We often become engrossed in media that reflects our experiences, or provides an opportunity to discover who we are and what we are capable of, to know we are not alone.  This is why Hill’s work is so important. They present a spectrum of relationships and identities, allowing for people across the world to be seen and to anticipate the longevity of their lives, as is the intention with art.