Matt (AJ Brown) and Karen (Susan Burke) listening to Steve’s ramblings in “I Trapped The Devil.”

The sinister Christmas movie I Trapped the Devil was released on April 26, 2019, following its debut at the Imagine Film Festival. Josh Lobo wrote, directed, and edited this 80-minute seasonal horror film that centers around Steve (Scott Poythress), a paranoid man living alone who gets an unexpected visit from his brother Matt (AJ Bown) and Matt’s wife Karen (Susan Burke) on Christmas Eve.

Matt soon reveals that Steve’s wife has died and he hasn’t been visiting him often, resulting in tension between the two. Karen grows uneasy when she notices the shoddy state of the house and Steve’s disquieting behavior. When Steve attempts to convince her and Matt that he’s trapped the devil in his basement, she calls her brother-in-law insane.

Lobo takes full advantage of the resources he had to make this film. In just one location and over the course of one night, he offers a compelling slow-burn horror narrative. Despite budget constraints and relatively unfamiliar actors, the film looks and sounds like it has high production value.

His focus on setting and direction rather than dialogue creates suspense throughout the film. In particular, the unusually dark lighting constantly shrouds the characters’ faces. This move occasionally frustrates by obscuring parts of the frame, but it undoubtedly produces an unsettling ambiance.

Lobo transforms festive Christmas lights into eerie, blinking witnesses to the horrors of the night. They bathe the interior of the house a hellish red, distorting the traditional image of a happy family celebrating the holiday. Along with its unnerving visuals, the film’s ominous soundtrack intensifies in the film’s most critical moments, depriving the viewer of a respite from the tension.

Poythress provides a poignant performance as Steve, the brooding, unhinged widower who could snap at any moment. From the second he’s introduced, he’s on edge, eyes darting as if he’s being hunted, and his descent into madness doesn’t take long. Surprisingly, Steve appears intent on performing a sort of reverse exorcism. Rather than expel the demon from his home, he boards up his windows and blocks the cellar door with a massive cross to prevent its escape. Throughout the movie, Steve rants about the nature of evil and supposed connections between local crimes. They initially sound like the ramblings of a conspiracy theorist, but it soon becomes clear that he may be the only lucid one in the room. 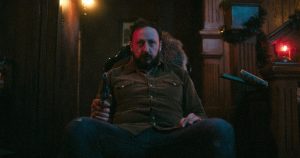 Steve (Scott Poythress) staring down the embodiment of evil in “I Trapped The Devil.”

Lobo’s depiction of the devil also deserves recognition. He induces terror by withholding a reveal of the demon, allowing the audience’s imagination to take over. He presents Satan as the disembodied voice of a helpless hostage, disturbing images on a TV, and a rattling door. Just like the Christian devil, this one finds people’s weak spots and exploits them to gain power and convert previously moral individuals.

In this film, the devil is the presence of evil as much as he is a physical being. He isn’t an immoral person or even their immoral actions. Instead, he’s the invisible impulse that moves them to sin. In the end, we’re reminded that this evil spirit can manifest itself in the most deceptive of vessels.

At the same time, this film is flawed. Its short run time belies its pacing, which is tortuous in some scenes. Also, Lobo’s ambiguity occasionally alienates the viewer since he doesn’t thoroughly flesh out his theme about the nature of evil or the details of Steve’s wife’s death. As a result, the finale doesn’t resolve all of the questions raised along the way.

Still, I Trapped the Devil’s shortcomings don’t detract from its alluring suspense or captivating atmosphere. Considering the tools with which he could work, Lobo made a solid independent film that filmmakers facing similar restrictions should study.