Michael and his father in "In France Michelle is a Man's Name."

At the 2020 Outfest Film Festival, In France Michelle is a Man’s Name premiered and took home the Grand Jury Prize. The film was recently screened at the 2021 Slamdance Film Festival as a part of the Narrative Short category. Em Weinstein (they/them pronouns) wrote and directed the film, which stars Ari Damasco (his first film), Olga Sanchez, and Jerry Carlton. In France Michelle is a Man’s Name follows Michael (Damasco), a young trans man, on a drive through rural Oregon to visit his parents (Sanchez and Carlton).

While Michael can navigate the house quickly, we notice that his surroundings haven’t changed to reflect his personal growth; instead, there’s a sense of stagnancy—ballet shoes and a pre-transition photograph hang on the wall. An uncomfortable dinner ensues but soon turns into Michael and his dad’s opportunity to go for a drive. What we witness is an exploration of masculinity: an initiation into manhood, trans identity, male bonding, fatherhood, and the extent Michael will go for acceptance. Weinstein has created a cinematic dream with tangible imagery, resulting in an experience that far surpasses the 12-minute running time.

Weinstein grew up traveling between New York City, where their mom lived, and Eastern Oregon, where their dad lived. Their upbringing provided them with the unique opportunity to experience two different American landscapes—each with their own cultural norms and identity—which inspired the film’s backbone. Weinstein says that this film is a venture into cinematic storytelling because of the reliance on visuals rather than on spoken words. To do this, Weinstein walked me through their process, beginning with the significance of the location. They equate the importance of location scouting to casting, as location, much like actors, has the responsibility of holding onto the film’s themes and its soul. Weinstein explains that the rural setting was necessary because of the automatic association with the Old West and American masculinity. In Old Western films, men are defined as dominant, powerful, hardworking, and assertive; the rugged landscape emphasizes the strength needed to travel through the mountains. 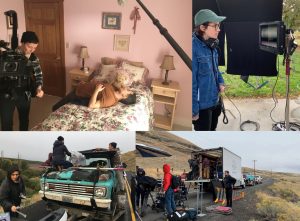 Director Em Weinstein on set of “In France Michelle is a Man’s Name.”

The film has two distinct color palettes, one for each of the poignant realms Michael explores. We are first introduced to Michael as he drives along a picturesque highway, surrounded by recognizable Old Western color tones: warm greens, pinks, and browns to guide us through the emotional undercurrent that Michael faces. Later, when Michael and his dad enter a strip club, a powerful blend of reds and blues hits the eyes, creating a stark contrast to the warm sprawling wheat fields outside. As Michael sits down and enters the shadows, his face is illuminated by the surrounding neon lights. The scene continues and Michael’s face reflects both colors entirely, right down the middle of his face, to signify a conflict of being pulled in two directions.

Weinstein explains that these specific color pallets were used to evoke the emotions that would otherwise have to be spoken. The colors create an emotional response far before anything is said. For the shots taken within the club, Weinstein carefully utilized the natural colors to ensure that the scene felt organic but heightened the contrast for the metaphor’s purposes. The colors paint the screen with pain, isolation, an inspection of strangers’ glances, and festering conflicts between the generations of men. Weinstein says this is all a part of intentional storytelling, showing the audience the story rather than telling them. As a director, they continue, “you have to be incredibly specific and understand what every moment of the film means, down to the slightest glance.” The key to achieving this is trust, trusting collaborators, cinematographers, set designers, and actors. Providing confidence ensures room for the staff to breathe; let the team shine, and you will often be pleasantly surprised with the result. The balance of holding on and letting go, something Weinstein learned in theatre school, continues to help them considerably on set.

As the audience, we have the opportunity to watch as Michael unpacks what it means to be a man, as he wants to dissect and understand masculinity in all of its facets before drawing a conclusion. The film doesn’t revolve around black and white choices; instead, it is the space in between. Often, films revolve around “the choice” parents have to make: accepting their child or not, rather than focusing on what could happen afterward. Weinstein says, “Coming out was just the beginning. The more interesting and difficult part is what comes after.” Once we come out, we learn more about ourselves and how we feel comfortable presenting; similarly, those around us also have to transition their image of who they saw us as to who we are. The film is just as much a template for parents as it is for their children. The story shows the value of parents listening and empathizing with their child; further, Weinstein hopes that parents will watch this film and be more open-minded regarding their children’s experiences as they walk through the world. Likewise, children gain empathy as they see that parents try hard but may not have the tools and language readily available, so it takes time. It is possible for parents and children to exist in their own worlds and still love one another; this love is messy and far from perfect, but universal within our world.

Michael from “In France Michelle is a Man’s Name.”

Just as messy and far from perfect is the ever-evolving concept of gender. Start questioning the ways in which you present, try on different clothes or colors, identify what feels good and what doesn’t. For LGBTQ+ people, we hold the power to reassure the cishet (cisgender and heterosexual) people in our lives that they can try on new definitions to redefine masculinity and femininity on their terms. We all can offer softness, compassion, and empathy, even though we have been taught to only identify those characteristics with femininity. In France Michelle is a Man’s Name is a stepping stone toward future narratives of curiosity and feeling comfortable with uncertainty. Embracing that there are no correct answers as we travel through life, we can take on what we like and reject what we don’t. It is essential to remember this is good for everyone regardless of their gender or sexual identity.

We can implement these lessons in any film genre—science fiction, horror, or drama. The more we create space for questioning, the more we can provide an example for those who are nervous and uncertain; it is confusing, messy, but possible. Weinstein encourages other queer and trans people to begin writing their stories and directing them, hire crews whose identities reflect the stories happening in front of the camera, and build safe spaces for cast and crew to create brave and daring work. Weinstein strongly encourages others to get involved in the industry. They say, if you have a story that you haven’t seen before, write it down. Weinstein has noticed more opportunities for LGBTQ+ people to get involved and urges us to flood the market with more queer and trans stories.

Weinstein hasn’t had doors close for a film being too niche or too out there—people are now, more than ever before, seeking out authentic new voices. There is no better time than now to write and create films as a queer storyteller. The doors have been opened by our community, and the more of us that come in, the longer the door will stay open, and we can break down the barriers together. Embrace your courage and finish the draft that you’ve been working on. We can create a universe where the gravitational pull guides us toward questioning and curiosity and affirms living in flux.