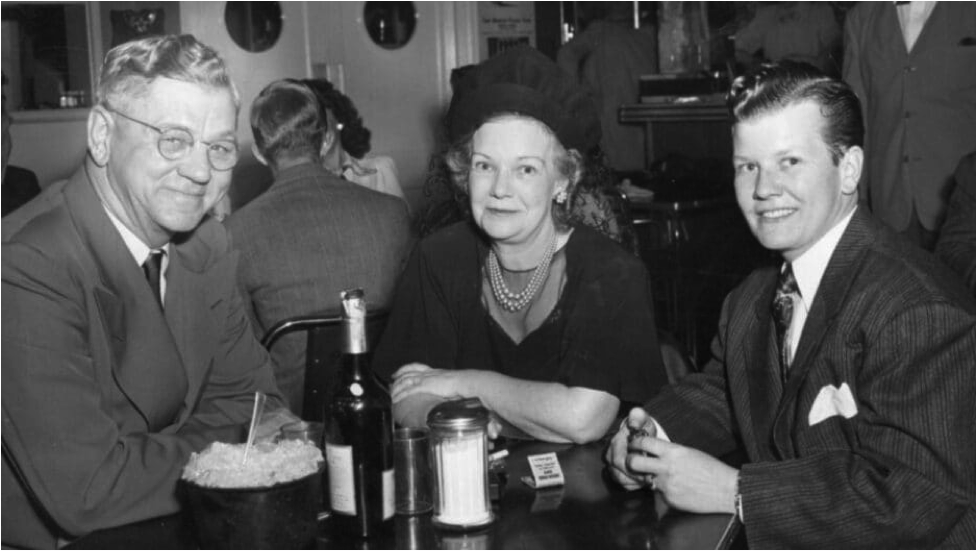 The Bay Area recently allowed their movie theaters to reopen, which meant that one of my first cinematic experiences in public would be attending the opening night of No Ordinary Man, the latest from directors Chase Joynt and Aisling Chin-Yee featuring invaluable insight from Marquise Vilsón, Thomas Page McBee, Stephan Pennington, Scott Turner Schofield, Kate Bornstein, Zackary Drucker, and Susan Stryker. No Ordinary Man delves into the life and legacy of jazz musician Billy Tipton. Writers Amos Mac and Chin-Lee decode Tipton’s life in such a way that speaks to the experiences of trans men today. Tipton, who died in 1989 in Spokane, WA a cherished husband and loving father, was an unbelievably talented musician who was much in demand throughout his life. By the age of 19, Tipton presented as the man he knew he was. He was stealth for the entirety of his career, meaning he never disclosed that he was assigned female at birth, despite being in the public eye for most of his life. Tipton married five times and adopted three children with his last wife, Kitty Tipton Oakes. 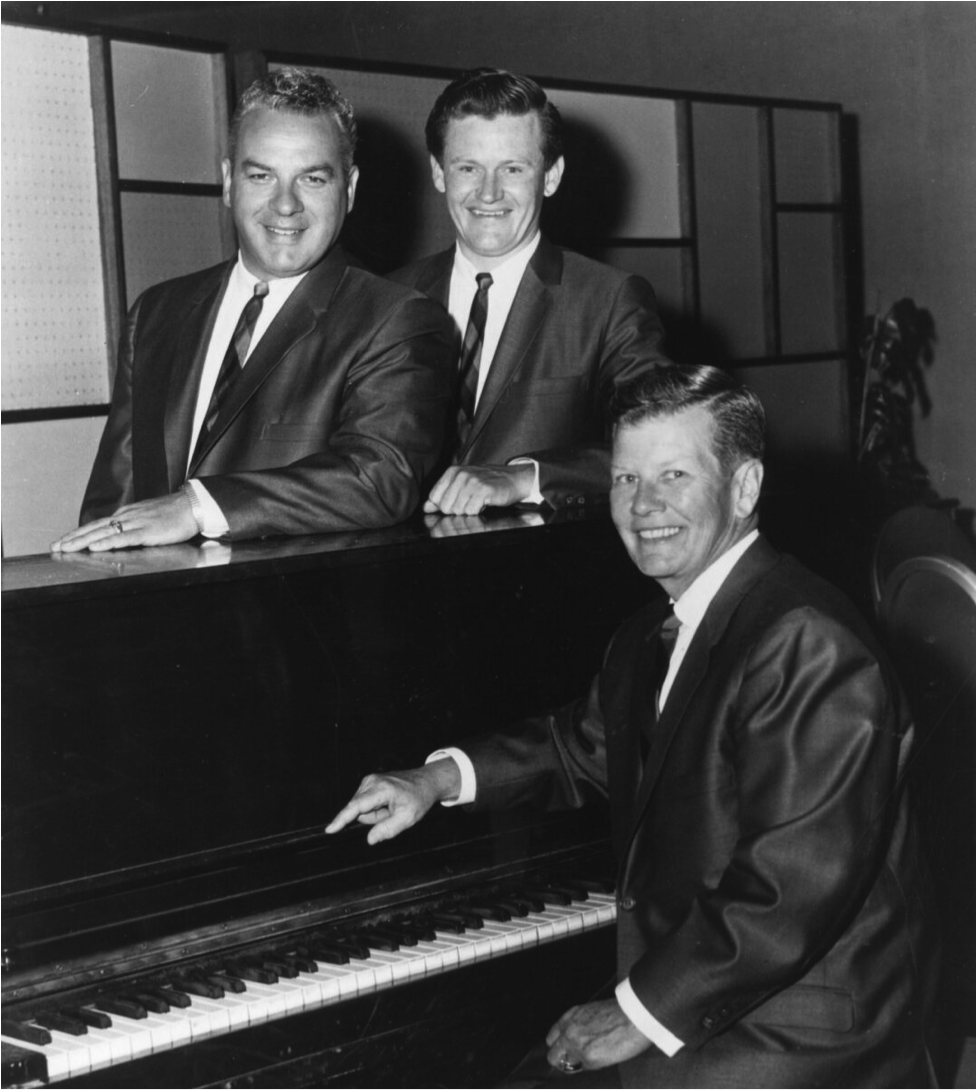 Billy Tipton’s career in jazz spanned over five decades, from the 1930s to the 1970s.

It wouldn’t be until Tipton’s death that the media, without permission or consent, revealed his transgender identity. This caused an immediate uproar as people felt as if they had been lied to. Journalists and talk show hosts publicly harassed Tipton’s surviving family, Kitty and Billy Tipton Jr.. Oakes and Tipton Jr. continued to rebuke accusations that Tipton was a woman and corrected the incessant misgendering that started to appear after his death. Despite their best efforts, Tipton became known as “a woman who pretended to be a man,” to further a career in jazz, because at the time jazz was a genre that was dominated by men. The trans masculine community would adopt Tipton as a trans icon, something members of the family wouldn’t know until the start of filming. Tipton provides a high-profile example of representation that the community had been searching for.

In the early stages of research for the film, Chin-Yee and Mac had little physical documentation that told Tipton’s story. The team had access to a few family photographs alongside the audio recordings and newspaper clippings of from Tipton’s career. As he never wrote a personal account of his life, the two writers had to get creative in how they were going to represent Tipton and his life without any insight on how he saw himself or how he moved through the world. Chin-Yee and Mac would instead tell his story through the eyes and lived experiences of those who had been influenced by him; this would not only help in dissecting the intricate nature of gender identity, but contextualize the nuances in his life as they relate to the transgender community today. Chin-Yee and Mac began drafting the script by using Diane Middlebrook’s heavily researched, though problematic and transphobic biography, Suits Me: Double Life of Billy Tipton to identify some of the major interactions he had faced in his life. Then Chin-Yee, Joynt, and Mac held auditions in which contemporary trans masculine actors and artists auditioned for the role of Tipton himself; which ultimately resulted in a documentary unlike any other. 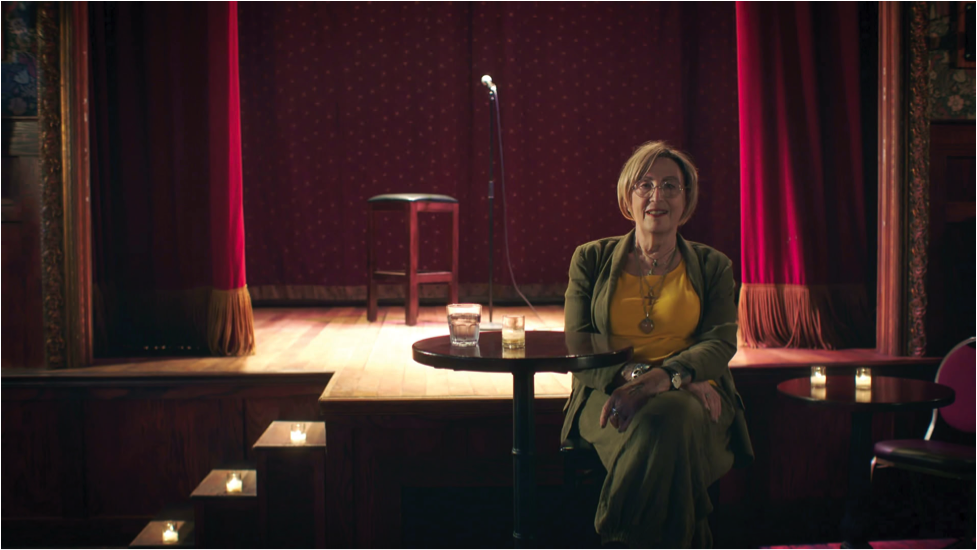 Kate Bornstein in an interview from No Ordinary Man. (Courtesy http://thefilmcollaborative.org) 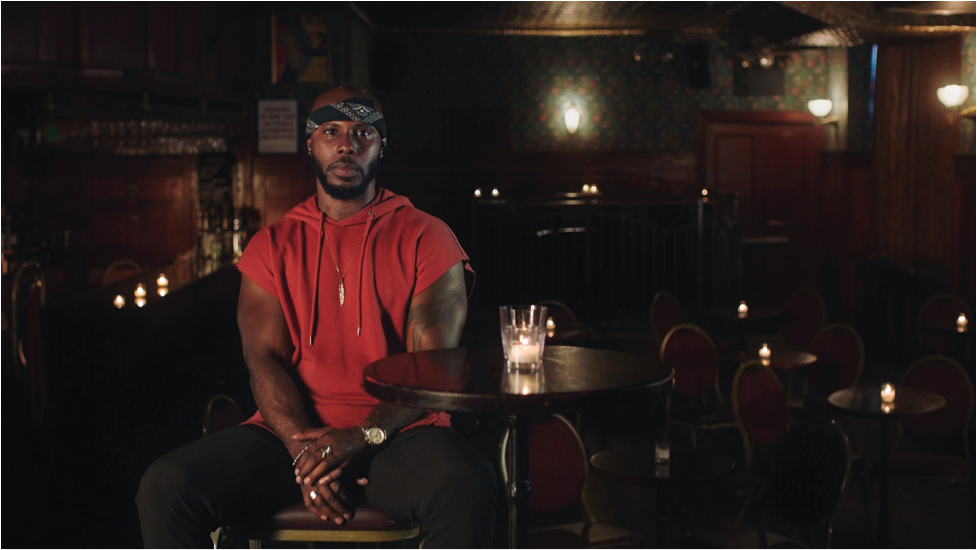 Marquise Vilsón in an interview from No Ordinary Man. (Courtesy http://thefilmcollaborative.org) 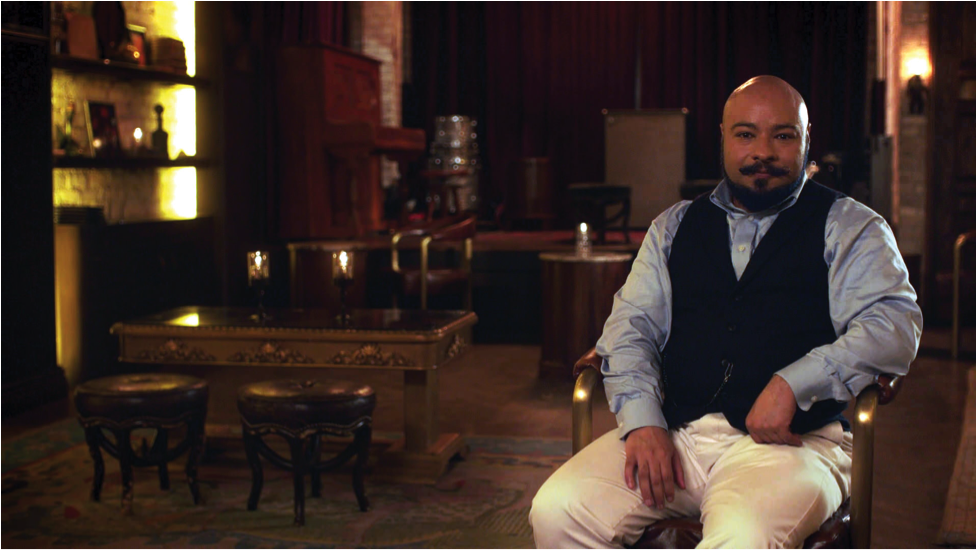 Stephan Pennington in an interview from No Ordinary Man. (Courtesy http://thefilmcollaborative.org)

As each actor steps into their audition, you can see them actively pulling from their own experiences as trans masculine performers to heighten their personification of Tipton. Each actor interprets and presents the lines in their unique voice, beautifully reflecting the limitless ways in which we all navigate through self-discovery and how we wish to honor our gender identity. Further, as the actors speak to unearthing their gender identity and finding solace in trans masculine terminology, the audience witnesses how expansive and multidimensional the transgender experience is, particularly for trans masculine people, something all too often overlooked by the media. Activists, academics, and notable artists from the trans community reinforced the vignettes to provide the social, cultural, and historical context to better understand the era Tipton lived in. The documentary speaks to the lack of vocabulary that existed during Tipton’s life that reflectes the existence of trans masculinity. As the film points out, the term transsexual was only used at the time to refer to trans women. There is no way we will ever know if Tipton would have identified with current terminology like trans masculine, trans man, or transgender to describe his experience with gender. Regardless of terminology, we know that Tipton has remained a relevant point of reference for reminding us that there has always been and always will be a presence of trans masculinity within society.

As a community, we work to preserve the legacies of those who have passed and ensure they are honored appropriately. While Tipton could not control his narrative in death, this film helps give a voice back to Tipton and his family. The film makes clear that Tipton will continue to be a model for those seeking to find themselves. We are fortunate to live in a time where we have access to so many ways to describe our identities. Hearing other’s stories provides affirmation to those who need it and it reminds us that we are not alone in our experiences. The extensive representation of trans masculinity in No Ordinary Man contributes to trans masculine people recognizing themselves on the big screen and feeling a connection to their community that stretches into the past. Feeling connected to the elders in our community, as well as the trancestors of the past, can radically validate your sense of self. No Ordinary Man offers Tipton a beautiful tribute in which he can enter the spotlight once again, but this time as an openly celebrated and appreciated member of the transgender community. 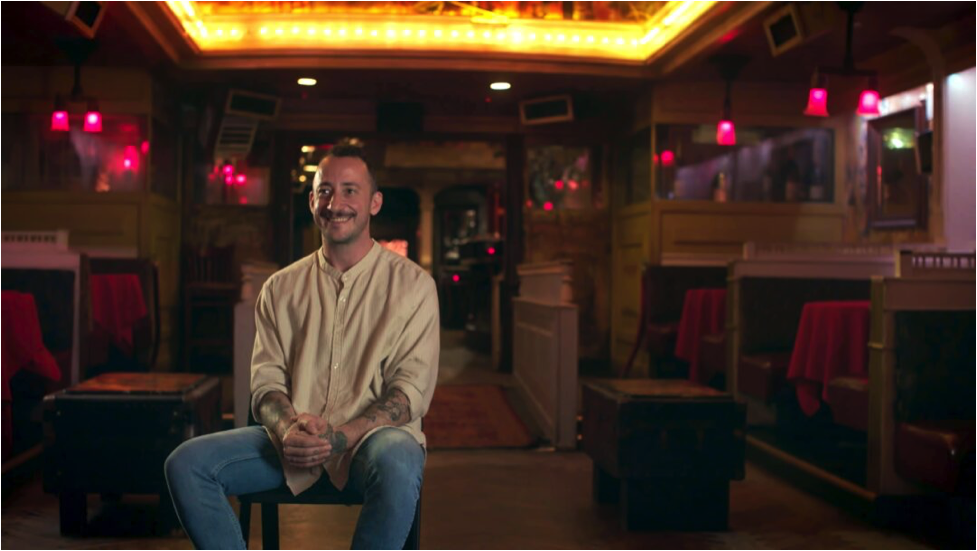 Thomas Page McBee in an interview from No Ordinary Man. (Courtesy http://thefilmcollaborative.org) 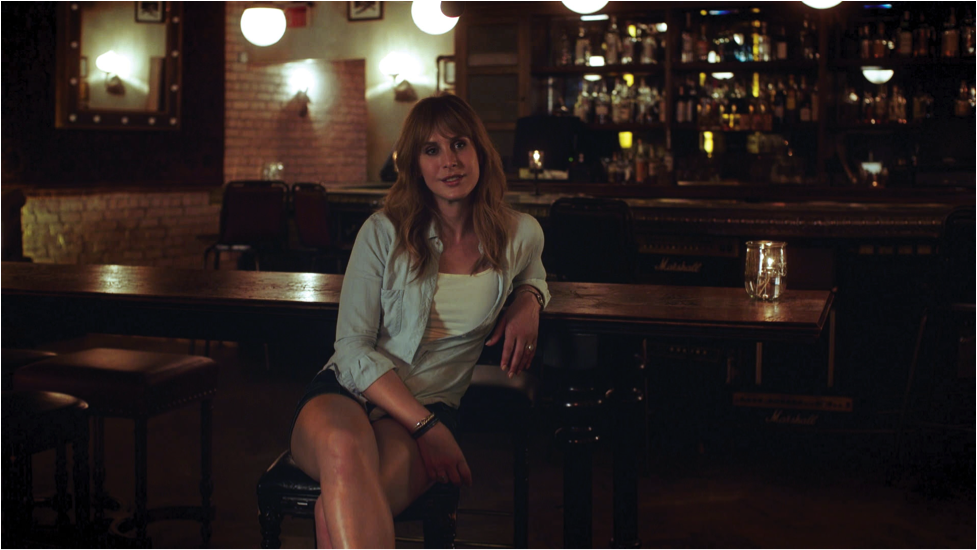 Zackary Drucker in an interview from No Ordinary Man. (Courtesy http://thefilmcollaborative.org) 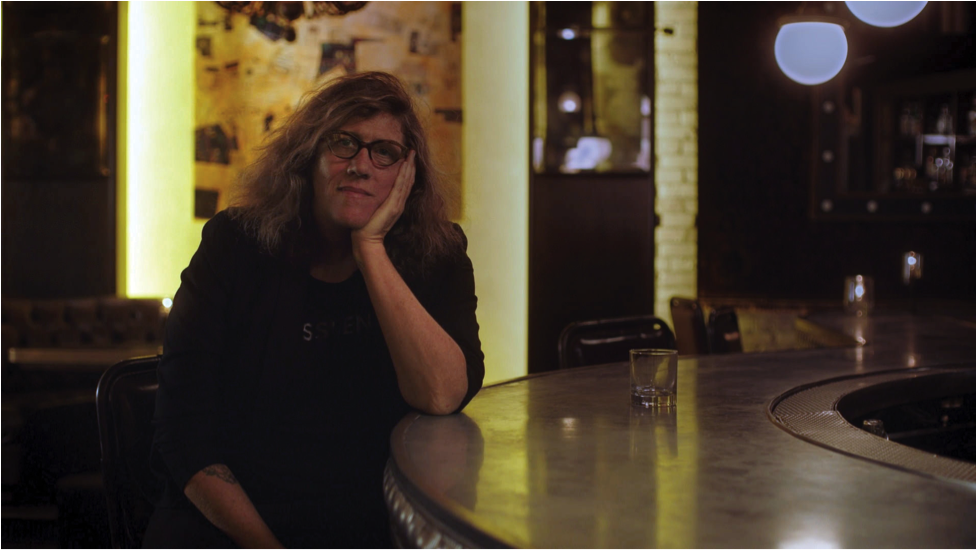 Susan Stryker in an interview from No Ordinary Man. (Courtesy http://thefilmcollaborative.org)

As a whole, the trans community is slowly becoming more visible on the big screen. The concept of trans people telling their own stories is starting to find a place in movies and television. When trans people tell their own stories, rather than rely on a cisgender lens, they provide a way for audience members to connect with an authentic representation of the community. When trans people speak about the lives of others in the community or write trans characters, they bring the complexity of the human experience, instead of being a one dimensional character meant to promote ideas about cisgender interactions with gender identity. These are stories about trans lives from a first-hand experience. While I was in the theater, I watched as the audience looked deeply into the eyes of those on the big screen, as larger-than-life authorities of themselves and their community, and valuable contributors to society at large that deserved respect. The audience provided their full attention and focused, like eager students, on every word. This was an incredibly poignant experience and a moment I will never forget.