Stills from Romeo + Juliet (1992) during the iconic pool kiss.

Baz Luhrmann’s iconic re-imagining of the classic Shakespearean tragedy celebrates its 25th anniversary this year. As the several anniversary screenings throughout this year demonstrate, “Romeo + Juliet” (1996) has not lost any of its appeal in the years since its release. Initially labeled as a “very bad idea,” and panned by critics as a try-hard movie that intended to update the play in a forced way, the movie thrived regardless among the youth and general public. It grossed over $140 million on a $14.5 million budget and developed a cult following.

Set in Venice Beach in the nineties, the film’s daring aesthetic contributed to one of the most visually innovative versions of the play. The visuals of “Romeo + Juliet,” including the kiss in the pool as well as the flaming Catholic imagery, built a semantic universe of forbidden love that spoke across the arts, especially to the queer community. The camp excess the movie created through the juxtaposition of the Shakespearean dialogue and Hawaiian t-shirts, Mercutio (Harold Perrineau) as a drag queen, and the melodramatic cinematography found a devoted public. 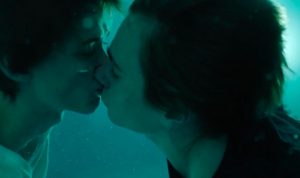 Through its music and costuming choices, the film continues to influence the visuals of many queer stories, such as the homage in the third season of the 2016 indie Norwegian show “Skam” or the 2019 show “Euphoria,” which included a great entry with Jules dressed as fair Juliet for Halloween. Not only is Even, the romantic interest of “Skam,” fascinated by Baz Luhrmann’s films, but later we can see the homage in action when he and Isak kiss in a pool and almost get caught (S3E4) or when Isak realizes he loves Even, leaving a church surrounded by over-saturated Catholic symbols (S3E9). Similarly, Jules’ entrance to the party as Juliet carries with it the references to doomed love (S1E6), and her later underwater kiss with Rue echoes the imagery of “Romeo + Juliet” (S1E6).

All of these elements are high-camp and have been repeated and remixed countless times, which speaks to their relevance. As Luhrmann once told the BBC, his “red curtain movies” build a hyper heightened world, artificial and similarly doomed. Clearly, “it’s not about naturalism” but emotion. Camp theorist Susan Sontag couldn’t have said it better. A quarter of a century since the release of “Romeo + Juliet,” it remains as effervescent as ever.