(This review may contain small spoilers for readers) 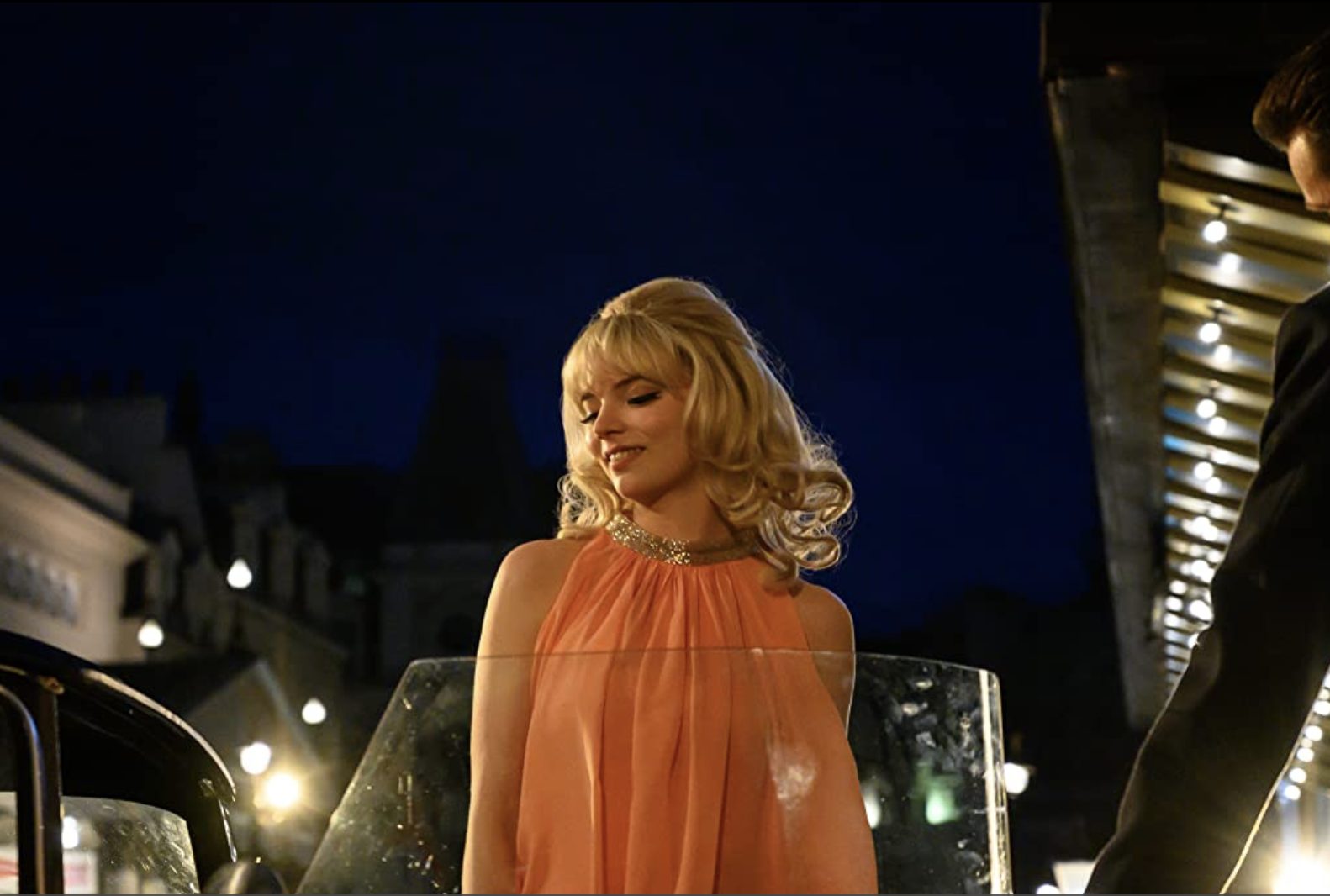 “Last Night in Soho,” directed by Edgar Wright, was released on October 29, right before many Halloween movies were also released. There were big hopes for the movie from fans that have been waiting for a new release after “Baby Driver” in the box office, but even with all the positive reviews, it didn’t meet those expectations. This is the first movie Wright released after “Baby Driver,” and it was hoped by fans and critics that “Last Night in Soho” would reach the buzz that “Baby Driver” had. Also, “Last Night in Soho” had the aesthetic and appeal of lighting and cinematography that pulled people in. The box office for “Last Night in Soho” was $17 million, despite the fact that it has received rave reviews from big name magazines and had a budget of $43 million. The New York Times and IndieWire both gave reviews highlighting the great cinematography that Wright created. But I’m of a different opinion.

I will start with some positive aspects before jumping into the negative side. I did like the portrayal of sex work within the showbiz community, and the glorious side of it the first few times we see Sandie (Anya Taylor-Joy) in Eloise’s (Thomasin McKenzie) dreams. Once we get to the third or fourth dream we start to see the dirty workings inside the industry. “Last Night in Soho” shows the inner workings of showbiz in a very unique way. You see the girls happy and living the dream, but as Sandie runs backstage the viewer, Sandie, and Eloise all see what truly happens behind the stage. We see the sexual abuse, drugs, and all around bad situations the women are put in. The portrayal of this aspect is unnerving yet moving and really throws the viewer into the world of showbiz. 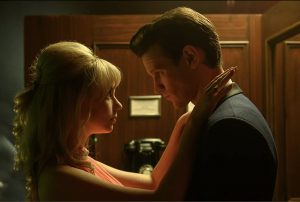 A technical issue with “Last Night in Soho” was the fact that there were many scenes with flashing lights, but no warning. This can have many negative effects for some viewers watching and they need that warning in order to be safe for medical or other reasons. This is an issue that could have been easily prevented by a warning screen before the movie but was ignored altogether.

In their recent review on “Last Night in Soho,” IndieWire stated, “Whatever is going on, her trips provide an escape from present-day pressures along with an abundance of fashion ideas. However, she notices that being a beautiful young woman on the bottom rung of the showbiz ladder in the 1960s might not have been as glamorous as she imagined.” While this statement is true, I had issues with the way Eloise handled the trips back in time. After just the second dream that features Sandie, Eloise starts changing her looks and projects at school to mirror the Sandie she sees in her dreams. This comes off as unrealistic. The fact that Eloise willingly changes her whole life after seeing two dreams makes me question Eloise as a character.

The third time we see Sandie her life has done a 180, as has Eloise’s. At that point, Eloise starts to see the reality of showbiz in the ‘60s, but she has already changed her life to mimic Sandie’s; she changes her whole appearance in order to be like Sandie without knowing anything about Sandie. Eloise makes up who she believes Sandie turned out to be based on one dream, which makes the complete change in appearance seem too fast. The unrealistic switch that Eloise makes happens too suddenly for it to be plausible, and lines up the plot for the twist way too easily. The idea that she can change everything about herself to be exactly like Sandie without something bad happening is very implausible. Wright sets up the viewer too perfectly and it just throws the whole cadence of the movie off. The viewer knows what will happen based on Eloise’s sudden behavior changes which leaves some of the suspense falling short.

Wright has talked a great deal about the inspiration going into this movie. According to Los Angeles Times, “The film also touches on issues of mental illness, sexual violence, race and class in ways that are new for Wright.” It is true that mental illness, sexual violence, and class play a big part throughout the movie, but I don’t believe that it is touched upon enough in order to say that this is a pivoting theme throughout the whole film.

Another review I had issues with was The New York Times, as the review poached the context of the film wrong: “As Eloise’s psychic connection to Sandie starts to overwhelm her daily life — given welcome flashes of normalcy by Michael Ajao as a supportive suitor — the plot (of which it’s best to say as little as possible) drastically darkens.” While John (Michael Ajao) helps with Eloise’s mental health, this plotline contains no substance. John meets Eloise and, from the start, willingly takes all of her problems as his own. With no “getting to know you” period, it seems very unrealistic that John would dive full-heartedly into her life and put his life at risk for a girl he just met. While his character does further the plot, he has no plot of his own, making him fall flat as a character. 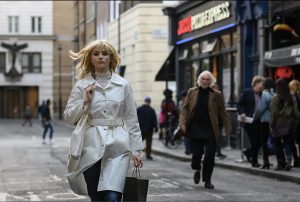 Eloise, after changing her looks to Sandie, being followed by who she believes is Jack Source: IMBd

The room that Eloise rents out also raises some questions. Eloise moves into a room rented to her by an old lady; however, this lady keeps important secrets in that room. If she wished to conceal such secrets, why would she rent this room out to someone? Why rent out a room knowing that the secret will be found out? In the scene where Eloise first moves in, there is mention of a smell that will not go away, but that Eloise will surely get used to it. This has to be the smell of the crimes the old woman committed, making it hard to believe that she would rent out this room, even though she doesn’t know Eloise has a “gift.” Moreover, this has happened multiple times with multiple tenants. If people seeing things in that room would lead back to your crime, why continue to rent the room? This section of the plot really bothered me because it just doesn’t make sense for her to move someone into the scene of a crime that she wants to keep hiding. Also, finding out who the old lady really was should have been a big reveal, but it was easy to predict.

Overall, the movie fell short. The first half of the movie premiered in a lively, colorful setting and really pulled the reader into the life of both Sandie and Eloise. The second half of the movie, the plot fell flat and I found myself wondering how they would address certain holes, and, by the end, realized that they weren’t going to.

I found that I left the movie with more questions than answers. The questions mostly centered around issues with character development. The “mean” girl that Eloise almost stabs during a vision has completely forgiven her and even celebrates Eloise’s success even though they didn’t like each other from the start. Also, Eloise’s grandmother continually states a trip to pick Eloise up would happen, but it never does. This makes me wonder why at the beginning of the movie the grandmother has such a huge issue with Eloise leaving for London and by the end she doesn’t do anything to help her granddaughter when she knows Eloise is not okay.

Why was the old lady willing to rent out the room when there are so many secrets hidden in that exact room? Why was Michael willing to put his life in danger for a girl he just met? Lastly, why were the visions acting incredibly guilty when in the end they aren’t who or what we thought they were?

“Last Night in Soho” had many qualities that could have made for an amazing movie, but sadly had many bad qualities that just made the movie mediocre. The plot holes, the fact that there was no character development for certain characters, and the predictability really brought down the overall effect of the movie.

One Response to “Despite What You Might Have Heard, “Last Night in Soho” Fell Short”