Robert Pattinson as Edward Cullen and Kristen Stewart as Bella Swan in “Twilight” (2008).

Amongst various supernatural conflicts, “The Twilight Saga” presents one of the most famous romances of the 21st century. However, “Twilight” (2008) stands apart from the rest of the franchise in several ways. It’s not just the statement blue filter.

Based on the best-selling novels by Stephanie Myer, “Twilight” follows teenager Bella Swan (Kristen Stewart) after she moves from Arizona to live with her dad in a small town in Washington state. After starting at her new high school, Bella finds herself drawn to aloof classmate Edward Cullen (Robert Pattinson) and desperately tries to unveil the secrets he is hiding.

The film that launched the over $3.3 billion worldwide grossing vampire franchise, however, started with a significantly smaller budget than its sequels. As the films were released, budgets and box office draw increased: “The Twilight Saga: New Moon” (2009) and “The Twilight Saga: Eclipse” (2010) were each made with budgets over $50 million, and “The Twilight Saga: Breaking Dawn Part I” (2011) and “The Twilight Saga: Breaking Dawn Part II” (2012) were each made with budgets that exceeded $100 million. However, the film that started it all had a budget of around $37 million, which included purchasing the book’s rights amongst other technicalities. In fact, during an interview with Vanity Fair, director Catherine Hardwicke recalled being told by Summit Studios that she had “to find a way to cut $4 million out of the budget in the next four days” or they would terminate the production.

Of the 10 highest-grossing films in the U.S. released in 2008, “Twilight,” which ranked 8th highest-grossing, had the smallest budget, while 8 out of 10 of the highest-grossing domestic films had budgets exceeding $100 million. The ultimatum to make “Twilight” with a limited budget was based on the idea that the film would have little commercial success. Many underestimated the impact that ”Twilight” would eventually have. Though Meyer’s books were bestsellers, they had a smaller following at the time, prompting multiple hesitant film studios to turn down the project.

“Nobody knew what it was going to be, what it was. I didn’t have committees giving me notes; I wasn’t watched by big-time producers. I didn’t have the pressure of hitting blockbuster marks,” Hardwicke told The Hollywood Reporter.  “We didn’t even have a test screening, so it was really made like an indie film. After the first movie, more people got involved, and the other films were managed to a greater extent.” With little studio involvement, Hardwicke created “Twilight” in a way much different than its sequels, a difference notable to fans, casual viewers, and those involved.

Actor Robert Pattinson, who plays the 104-year-old teen vampire Edward Cullen, expressed a similar position in his 2012 interview with The Washington Post when asked which film in the franchise was the most meaningful to him. “Definitely the first one. By a huge margin. It was just an entirely different world. For one thing, it was just a really, really fun movie to shoot,” said Pattinson. “It was difficult, and it was crazy, but the experience was so different. Just having a really big, young cast as well — I have never done anything like it since. Everyone was kind of unknown and had a feeling about the movie. There was definitely some excitement there, that it could either be a total miss or something could happen with it.”

Luckily for fans, something did happen with it. Making $69 million during its opening weekend, “Twilight” became the top-grossing film directed by a woman with a female protagonist at that time. Even today, excluding animated films such as Jennifer Lee’s “Frozen” films (2013, 2019) and “Brave” (2012), “Twilight” remains as one of the highest-grossing women-centric films directed by a woman following only after superhero blockbusters “Wonder Woman” (2017) and “Captain Marvel” (2019). 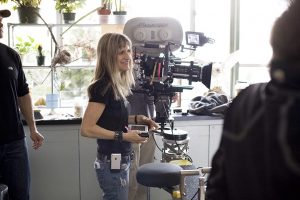 Director Catherine Hardwicke on the set of “Twilight” (2008).

However, despite many critics writing it off as a film for teen girls, “Twilight” was the only movie in the entire franchise that a woman directed. The following installment, “The Twilight Saga: New Moon,” was directed by Chris Weitz following scheduling conflicts that inhibited Hardwicke from returning for the sequel. However, despite attempts to return, Hardwicke did not direct another “Twilight” movie, or any other woman for that matter, following her film’s box office success. With a storyline revolving around the life of a young woman, Hardwicke was able to bring a vision and perspective to the franchise that the following male directors could not. For a story renowned for its representation of female adolescent desire, a director capable of truly understanding its complexities through a feminine perspective was a necessity disregarded in the sequels.

The statement blue filter throughout the entire film in “Twilight,” which is key to establishing the film’s tone and encapsulating the Pacific Northwest setting, was not the only thing Hardwicke brought to the table. Fans on TikTok and Twitter have also acknowledged what Kirk Honeycutt of The Hollywood Reporter in his 2008 “Twilight” review called “the Camp factor.” With its visually unique aesthetic, its prolonged stares, awkward interactions and overblown drama, “Twilight” represents the definition of Camp: an aesthetic that revolves around intentional exaggeration and bad-taste as a means to create good art.

Hardwicke very deliberately intensified an already exorbitant story about sparkling vampires. The most indisputable example of this is within the film’s most iconic scene. Those who did not read the books may be surprised to know that the infamous moment where Bella reveals she knows Edward is a vampire did not actually occur in the middle of a forest but rather in a far more casual car scene. However, Hardwicke’s stylized portrayal of this pivotal scene was momentous to the film’s reception and to showcasing her interpretation of the story. “Twilight” displays an ironic awareness of its content and plays with audience reception, which the later films lack. The first film of the Twilight franchise appears aware of its own absurdity and played into it, lending itself to the Camp interpretation, while the sequels only become more absurd without this ironic self-awareness, crossing the boundary of what can be considered Camp into something that just is not critically redeemable.

“I know what you are”: Robert Pattinson and Kristen Stewart in “Twilight” (2008).

While leads Kristen Stewart and Robert Pattinson may have received negative reviews for their performance in “Twilight,” it is evident to those familiar with Meyer’s books and their acting careers that their performances were very intentional, encompassing how Myer wrote the characters. This year, Stewart is receiving Oscar buzz for her performance as Princess Diana in Pablo Larraín’s drama “Spencer” (2021). Meanwhile, Pattinson has taken on the role of the new Batman in the upcoming DC film releasing in 2022, following his critically acclaimed roles in “Good Time” (2017) and Oscar-nominated film “The Lighthouse” (2019). While some audiences may have found Stewart and Pattinson’s 2008 performances cringe-worthy, these talented actors played these canonically awkward characters to perfection, elevating the Camp factor of “Twilight.”

In an interview last year with GQ, Robert Pattinson reflected on the Twilight films, stating, “I think in a lot of ways [the Twilight movies] seem more like sort of existential art-house movies than the things that were intentionally that.” Of course, what is more existential than a teen girl’s desires driving her to sacrifice her mortal life? While perhaps stated in a joking manner, as he is known for being transparent about his negative opinions about the franchise, Pattinson presents an interesting perspective best reflected in the Camp nature of the first film.

The limited budget and indie-like production of “Twilight” lent itself to the Camp aesthetic. Its subpar visual effects, heavy filters, and edited montages made sense to the movie’s narration. As Summit Entertainment produced the sequels with big budgets and more studio involvement, the elements that added character to the first film were either removed or improved in quality, which took away from the aesthetic Hardwicke created. The improvement of visual effects, such as the superspeed vampire-running and CGI werewolves and overblown supernatural fight scenes, detracted from the content awareness present within the first film. The storyline of the franchise was inherently better suited for a lower-budget, indie-like project. The continuously upgraded budgets did not improve the storytelling but rather corrupted the ironic presentation and artful narrative Hardwicke created in “Twilight.”

Despite the sequels’ differences from the original, The Twilight Saga remained popular throughout its release and did numbers at the box office. “Twilight” not only pathed the way for its blockbuster sequels, but the success of this film also paved the way for teen book-to-film adaptations that took the film industry by storm in the early 2010s, movies like “The Hunger Games” (2012), “The Fault in Our Stars” (2014), and “Maze Runner” (2014) being popular examples. Without the success of “Twilight” and the subsequent film franchise based on Myer’s teen book series, it is likely that many of the films based on books specifically for teen audiences would not exist. “Twilight” proved that investing in the book genre was worthwhile.

“Twilight”’s influence did not stop once we entered a new decade. Despite the last movie being released in 2012, The Twilight Saga remains relevant today. For the past two years, the franchise has been experiencing what social media users have deemed the “Twilight Renaissance,” marking a resurgence in fan activity and popularity, only increasing as Netflix released the saga to its streaming platform. The movie’s ongoing popularity over a decade after its release is a testament to its significance, not only through its commercial success but also its influence on popular culture and the film industry.