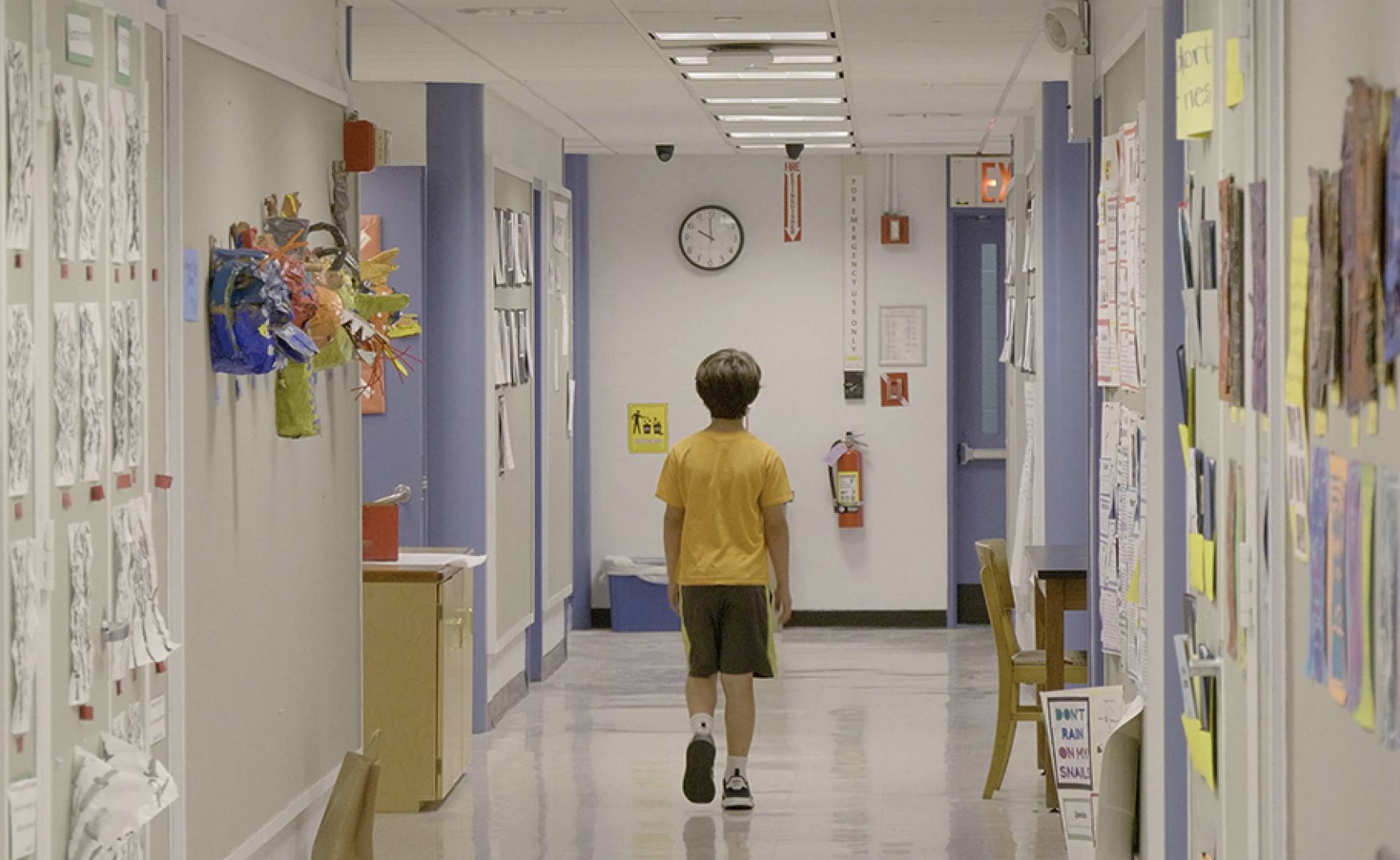 A student walks down the hallway in a scene from “Bulletproof”. Photo by Jem Cohen.

Gun violence has been a prevalent issue in the United States for many years, with 34 school shooting incidents occurring in 2021, according to Education Week. However, despite this continuous issue, there has not been much change when it comes to gun violence prevention protocols in schools. “Bulletproof,” directed by Todd Chandler, is an informative and emotional documentary about how school shootings and protocols affect the lives of students in the United States. Although this film premiered in 2020 through PBS, “Bulletproof” was one of the featured films at this year’s Bright Light Film Series on February 17th.

The film quite literally begins with a bang. Within the first two minutes, the sound of gunshots echo through the halls.  Students and faculty immediately run into classrooms and barricade the doors. One teacher falls to the ground and exclaims that they’ve been shot. The sheer fear and adrenaline that is captured through the students’ and teachers’ behavior sent chills down my spine. Soon, it’s revealed that the gun shots are fake. This is nothing more than a school drill. However, the distress caused by the opening scene is prevalent for the next hour and 20 minutes. The juxtaposition of a mundane school day with the interference of countless drills is an immersive experience depicting the chaotic life of a high schooler in the 21st century.

The screening included a post-viewing discussion with director Todd Chandler and Dr. Chana Sacks, Massachusetts General Hospital’s (MGH) co-director of the Center for Gun Violence. The discussion, moderated by Bright Lights organizer Anna Feder, added new insights into the film that would otherwise be missed during a home-viewing experience.

Chandler’s decision to include both student and faculty voices was a wise one as it allowed for more than one point of view. It is also clear that Chandler has a lot of respect for the people in the film. Although Chandler gets up close and personal with the students — letting the camera sit on their natural reactions for seconds at a time — there are no lower-third titles. The decision to not identify the subjects was very much intentional.

“I felt like I wanted to keep a distance,” Chandler says. “It wasn’t about sort of trying to set things askew. […] There’s also a distance [with] holding things for a long time. Letting people look, letting people’s eyes wander and find their own way; to me that felt really important.”

“Bulletproof” emphasizes the normalization of lockdown drills and metal detectors, and seeing it shown on screen highlights how disruptive these protocols can be to one’s education. Although these measures are necessary for their safety, many of the students in the film express that these drills are almost as anxiety-inducing as the real deal. This film truly begs the question of whether these protocols are making things better or worse. During the post-viewing discussion, Chandler brings up a quote from one of the students in the film.

“And the students [in the film] are saying that it’s you, the news media, that makes [them] think it’s coming,” Chandler said.

Chandler then goes on to recite a quote from the film saying, “‘You’re traumatizing me more putting me through these drills day-in and day-out. God forbid hell comes to our school one day; we can deal with that. We can’t deal with the preparation every minute as if that is inevitable.’”

Chandler touches on the idea of hyper-masculinity and how that could be a possible trigger for a school shooting. He explains that hyper-masculinity is so prevalent in our culture today and is a very dangerous thing that can lead to serious mental health issues. This idea first popped into his head when his son was born while making this film.

“[When] we found out that our kid was going to be male-sexed, for me something really shifted in making the film. When we found that out, at the time I just thought, I don’t know how to raise a boy. I mean whatever our kid’s going to decide to be, you know — at the time I just thought I’m afraid for him,” Chandler says. “And then as we continued to go out and film, I thought a lot about masculinity and the performance of masculinity and white supremacy and capitalism. None of these are overtly stated in the film, but in terms of my lens of what I was looking at, and what I was putting together, that really formed the process.”

Although the reception from critics and audiences was mostly positive, there were some people who wanted more from the film. Chandler says that some critics expressed that the film was a missed opportunity to include the gun industry, and that he was only giving one side of the story. However, Chandler’s goal in making this film was not necessarily for it to be a call-to-action, but an immersive experience that will leave audiences with the information they need to form their own narrative.